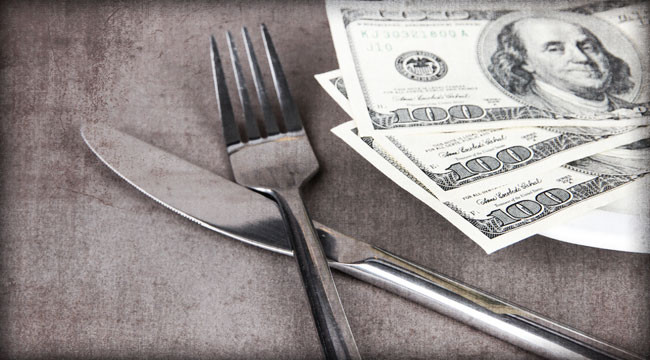 We live in parallel universes. Federal Reserve Chairman Ben Bernanke is said to have a healthy concern about deflation. McDonald’s franchisees, on the other hand, not so much.

The chain of Golden Arches fame will give up its Dollar Menu after 11 years, renaming it “The Dollar Menu & More” next month. It turns out you simply can’t make a buck selling burgers for a buck. It must be hard to give up on such an amazing marketing gimmick, generating one-seventh of all sales since its inception. But as Derek Thompson describes in The Atlantic, the Dollar Menu is an anchor “enraging franchisees who can’t make any money selling 2013 processed cow meat at 2002 prices.”

If Ben Bernanke is paying attention, he is no doubt thrilled to hear about rising price pressures.

Franchisees were surveyed earlier this year, and one verbalized the unhappiness with the ongoing promotion: “Every item introduced comes with unlimited coupons for FREE and a ‘suggested price point’ that is ridiculous and does not meet franchisees’ needs for profitability. It does meet the corporation’s need to keep the appearance of customer transaction counts high, pushing the stock.”

While the corporate office kept adding items to the menu, franchisees were expected to serve the new items right away. Operators lamented that they had to “do it consistently and with a smile on our face.” Adding, however, that “there’s little to smile about.”

While franchisees grinned and bore it, competitors copied the idea. In 2009, Burger King instituted a dollar-burger promotion, prompting a lawsuit from franchisees who claimed the cost of a double cheeseburger was $1.10. Burger King required all locations to take part in the promotion.

Wendy’s changed its 99-cent menu to a “Right Price Right Size” menu. The Jr. Cheeseburger Deluxe went from 99 cents to $1.19. And customers got four chicken nuggets, instead of five, for 99 cents.

In his piece for The Atlantic, Thompson commented that beef prices have done anything but lag behind other items. He writes, “the price of beef and other staples has been turbulent.” What’s angered franchisees is the price of the double cheeseburger over the cost of its ingredients. 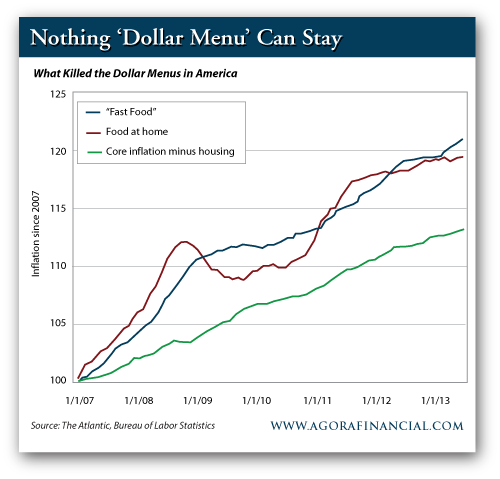 Meanwhile in the Fed’s ivory tower, Fed economists don’t have to worry about staying in business selling burgers below cost or tinkering with portion sizes. They theorize there is an absence of aggregate demand and low interest rates and more money will solve the problem. Their friends generating numbers down the street at the Bureau of Labor Statistics claim prices have increased only 1.5% over the past 12 months. They see no inflation and don’t want to hear about it.

In The San Diego Union-Tribune, Dan McSwain articulates the Fed’s fears that “falling inflation would give way to deflation, a spiral in which generally falling prices cause consumers to delay purchases in hopes of even lower prices, which depresses prices — and wages — further.”

“Obamacare is going to destroy already low profits… McDonald’s Corp. does not seem to care.”

This theoretical downward spiral does not generate an increase in demand, but instead causes sales to dry up. Despite goods and services being more affordable, Keynesians like Bernanke believe people will stop spending money, workers will then be laid off, real estate prices will fall, foreclosures will ensue, and banks will fail. In other words, it will be 1933 all over again.

Bernanke was asked earlier this year about the Bureau of Labor Statistics’ low inflation numbers. “Does this sort of inflation performance suggest that you should be pushing harder on the accelerator?” The Fed chair answered that low inflation was bad because it “It increases the risk of deflation. It raises real interest rates. It means that debt deleveraging takes place more slowly.”

He went on to say:

“There are a number of transitory factors that may be contributing to the very low inflation rate: For example, the effects of the sequester on medical payments, the fact that nonmarket prices are extraordinarily low right now. So these are some things that we expect to reverse, and we expect to see inflation come up a bit.”

In his world, he hasn’t seen inflation yet, so the Fed will continue to buy $85 billion in securities each month for the foreseeable future. Vancouver favorite Marc Faber, editor of The Gloom Boom & Doom Report, told a CNBC crowd it’s not a matter of when the Fed tapers, but when they start increasing their purchases. He was likely only half kidding when he predicted purchases of a trillion dollars a month.

The problem for McDonald’s franchisees is they don’t buy stuff to make burgers from the BLS. John Williams over at ShawdowStats.com figures consumer inflation to be either somewhere around 5% using the methodology used in 1990 or just short of 10% using the way CPI was figured in 1980.

And if things weren’t tough enough under the Golden Arches, franchisees say Obamacare threatens their already thin bottom lines. “Obamacare is going to destroy already low profits,” one franchisee said. “McDonald’s Corp. does not seem to care. The corporation is frantically trying to increase the number of 24-hour stores regardless of lack of profitability. Add rising commodity and insurance costs and McDonald’s drive to get operators to rebuild or remodel and the future looks bleak.”

In the real world of burgers and fries, costs are increasing. In the models generated in government offices, bureaucrats worry prices are teetering precariously on the edge of a cliff.

Famed American country musician Charley Pride sang a long time ago, “It was burgers and fries and cherry pies. It was simple and good back then.”

In the world of central bank central planning, it’s anything but simple, and “QE forever” certainly isn’t good.

P.S. What government problem troubles you most? Government spying on you and other government leaders throughout the world? Or the Federal Reserve devaluing the dollars in your account to make sure their close friends benefit? With government and Wall Street both coming at you from different directions, it’s tough to catch a break. And if you’re like us, you’re fed up with it.

Luckily, we’ve come up with a solution. Actually, we’ve come up with a set of solutions. And we’re giving readers of the Laissez Faire Today email edition an exclusive opportunity to gain access to them. Find out what you can do to take back control of your future from the bureaucrats in D.C. and the fat cats on Wall Street. Sign up for the FREE Laissez Faire Today email edition, right here.