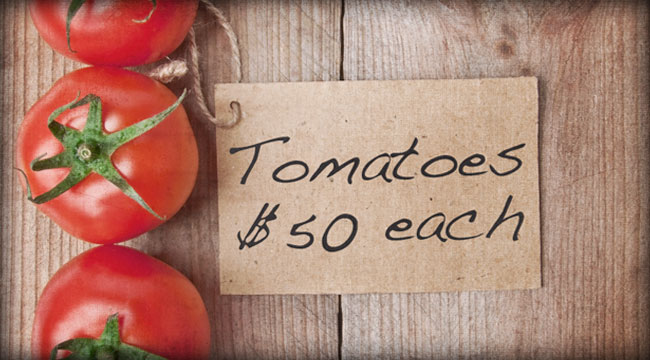 In Defense of Price Gouging

The east coast and parts of the southern U.S. were to varying degrees paralyzed by blizzards a few weeks ago. The snow as expected rendered the roads treacherous, and in anticipation of slick streets, shoppers flocked to the grocery stores in advance.

The rush into grocery stores, and its aftermath, offers worthwhile lessons in economics.

First up, it’s best to address an economic fallacy that storms, other natural disasters, and wars seemingly always unearth. The Safeway that I patronize in Washington, D.C. was inundated with shoppers ahead of the snowfall. This was the norm throughout the east and southeast, and no doubt some economists will say the economy was boosted by all the frenzied consumption. Don’t believe them.

War is the opposite of economic stimulus, and so are blizzards that shut cities down.

While it’s certainly true that consumers voraciously stocked up on groceries early last week, it must be remembered that all the spending at Safeway, Giant and Food Lion was the “seen.” The “unseen” was what consumers could have done with their money if they hadn’t been forced to load up on food, water, and other supplies.

Some may have directed the funds toward a trip, but even better, others might have spent the money on a new resume better suited to entice employers, and some potential employers could have used extra monies to buy ads meant to boost sales or software that would render their businesses more efficient and profitable, and for being more profitable, more able to attract the investment necessary to hire new workers.

Economists worship at the altar of consumption, but lost on them is the simple reality that all job creation, and all economic advancement, is a function of savings. Blizzards, though they might boost near-term consumption and the “velocity” of money that only matters to the fraudulent economics profession, almost by definition reduce productivity. War works against economic growth in a much more bloody way.

Yet if readers were to conduct a broad poll of the Ph.Ds that populate the economics profession, most would answer “yes” to the question “Did WWII End the Great Depression?” Of course this offers further proof of how worthless are the alleged insights offered by most who claim to be economists.

War is the opposite of economic stimulus, and so are blizzards that shut cities down. To be clear, there are no dollars hidden in those often attractive snowflakes that sometimes rain down on us during the winter.

Still, there are positive economic lessons to be gained from the snowfall. They too can be found inside Safeway, along with other grocery stories that served the needs of their desperate clientele this past week. Once again, anticipation of snowfall had people eager to stock up on food, water and other supplies as a hedge against an inability to reach stores and restaurants once blizzards reached their height.

Importantly, Safeway and other stores similarly anticipated a surge of customers due to the snow. Because they did, their customers didn’t go without once the storms hit. It wasn’t love that filled the shelves of grocery stores, rather it was a desire on the part of Safeway and others to generate profits. Profits are a dirty word to some in the punditry, but absent the reward of profits, many of us would have gone hungry amid the snowfall.

Profits also drive the very income and wealth inequality that so vexes economists, politicians and pundits. But as the Safeway example reveals, profits are a function of serving the needs of customers, and as innovators like Apple, Amazon and Google remind us, profits are sometimes a function of providing to consumers market goods they previously didn’t know they wanted.

Whether it’s the private equity investor growing rich for turning around a sick company, a Wall Street investor growing wealthy for allocating capital to a new cancer cure or software business, or yes, Safeway serving its clientele ahead of a blizzard, wealth inequality is the market reward for removing unease from the lives of others. If inequality didn’t exist, we’d have to invent it, and the more it grows, the better off we all are.

Economists almost to a man and woman decry “trade deficits” for supposedly weakening our economy, but to the individuals who make up our economy, many were relieved to have “trade deficits” last week. Indeed, as those of us in the east and southeast loaded up our grocery carts, the act of doing so gave us “trade deficits” with Safeway, Giant, Harris Teeter, Walmart, and other grocery providers. What a confused economics profession misses is that “trade deficits” are our certain reward for the “trade surpluses” we run with our employers.

All trade balances, by definition, and it’s abundant “trade deficits” we aspire to in the form of Apple iPhones, Sony Televisions, and yes, carts groaning under the plenty offered up by profit-motivated grocery stores so that we don’t go hungry during storms.

And while there was no evidence of “price gouging” from Safeway ahead of the D.C. blizzard, rest assured that no one would have cared. Lest we forget, the possibility of earning high prices for goods is the incentive for producers to make sure their products reach the stores, and is also the incentive for stores like Safeway to make sure their shelves are full. To the extent that Safeway didn’t “price gouge” out of fear of media castration, it should be said that the grocery giant did its customers a disservice.

…wealth inequality is the market reward for removing unease from the lives of others.

Indeed, while the Safeway in which I shopped had surprisingly well-stocked shelves, it took me two different trips to purchase ground beef. I also bought the last pre-cooked chicken. This bears mentioning because if Safeway had chosen to triple the prices of certain highly demanded goods, customers would necessarily have been more circumspect in their buying such that limited supplies of ground beef and chicken might have been available to a greater number of shoppers. Also, the ability to charge nosebleed prices might have served as a lure to more suppliers of highly sought after goods to get them to the locales most likely to be paralyzed by the snow.

All of which brings us to Uber, the app-driven car and taxi service. Notable about last Thursday was that Uber cars were readily available, and a walk down Pennsylvania Avenue near Georgetown revealed more than a few of them ready and waiting to serve the needs of their clientele.

Uber cars were easily accessible precisely because the company does its customers the favor of allowing its drivers to charge extra during periods of high demand, and during times when it’s extra treacherous to be on the road to begin with. “Price gouging” is a dirty term to politicians and all too many media members, but it’s the willingness of businesses to “gouge” their customers that ensures a sufficient supply of most anything when it’s needed most. Laws against “gouging” and “surge pricing” are anti-consumer precisely because they ensure limited supplies at exactly the time when demand for same is greatest.

With the health of the economy in mind, one can only hope that the latest snowstorm was the last of 2014. Economic growth is defined by production, and to the extent that blizzard-like conditions keep people from working, the economy suffers. Still, the hardships rendered by snowfall serve as a reminder that profits, inequality, “trade deficits,” and “price gouging” are beautiful for softening the blow of difficult times.

John Tamny
for The Daily Reckoning

Ed. Note: Championing the merits of “price gouging” may not win Mr. Tamny many friends. But his logical conclusion is an important one to consider. And if it challenges your previously held understanding of economics, all the better. This is exactly the kind of commentary featured in every single issue of Laissez Faire Today – intelligent, challenging and thought-provoking. If you enjoy this kind of reading, you can sign up for Laissez Faire Today, for FREE, right here.