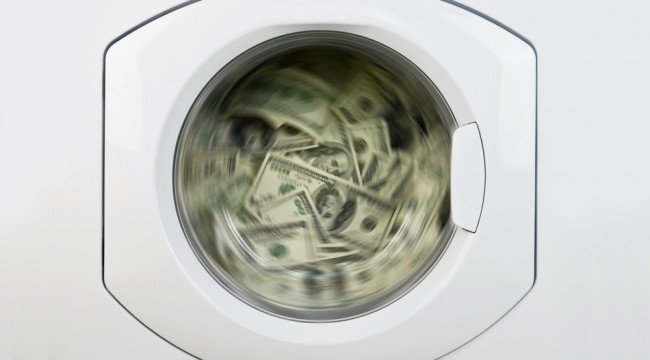 In Defense of Money Laundering

BitInstant CEO Charlie Shrem, along with alleged co-conspirator Robert Faiella, was arrested by federal authorities last week for allegedly laundering more than $1 million worth of Bitcoins. This is a tiny amount compared to the largest drug-and-terrorism money laundering case ever. Yet when British bank HSBC was found guilty in 2012 of laundering billions, the firm paid a fine of $1.9 billion. Authorities made no arrests, and HSBC still turned a $13.5 billion profit that year.

Rolling Stone’s Matt Taibbi detailed the crimes HSBC helped fund, including “tens of thousands of murders” and laundering money for Al Qaeda and Hezbollah. By contrast, Silk Road users have only been shown to have bought and sold drugs. (The six murders-for-hire commissioned by alleged former Silk Road head Ross Ulbricht were never carried out.) In fact, by moving transactions online, Silk Road likely decreased the violence associated with the drug trade.

“money-laundering… boils down to a single, basic prohibited act: Doing something and not telling the government about it.”

Again, no individual associated with HSBC paid any money or spent a day in jail. Shrem is currently in custody. Why is there such a disparity? Clearly the size, scope, violence or effect of the crime can’t justify the discrepancy in response. The Justice Department explained it by saying that HSBC is, in essence, Too Big to Jail.

“Had the U.S. authorities decided to press criminal charges,” said Assistant Attorney General Lanny Breuer during the announcement of the HSBC settlement. “HSBC would almost certainly have lost its banking license in the U.S., the future of the institution would have been under threat and the entire banking system would have been destabilized.”

What are the moral and practical underpinnings of a law whose punishments are harshest for those who violate it least? The Justice Department is here admitting that the costs of fairly enforcing the money laundering laws as written — potentially shaking up a major bank — outweigh the benefits.

Charlie Shrem founded BitInstant, a service that let users quickly buy into Bitcoin, in his family’s garage with $10,000 of their money while still in college. He became a founding member of the Bitcoin Foundation and served as vice chairman of the board — a position he’s since stepped down from. But his startup was plagued by regulatory troubles from the start, fueled by a lack of clear regulation pertaining to Bitcoin. In a trailer for the Bitcoin documentary “The Rise and Rise of Bitcoin,” Shrem claims to spend “thousands of dollars on lawyers every day just to make sure that I’m not gonna go to jail.”

While Shrem operated in regulatory uncertainty, and didn’t know the charges against him on the day he was arrested, HSBC received 30 different formal warnings in just one brief stretch between 2005 and 2006. Even then, HSBC was openly flouting the rules. The bankers knew, for instance, that they were funneling money for people such as one of 20 early financiers of Al Qaeda, a member of what Osama bin Laden himself apparently called the “Golden Chain,” according to Taibbi. Another customer was powerful Syrian businessman Rami Makhlouf, a close confidant of the Assad family.

Some, including Taibbi, have called for equal jail time for all offenders. There is no doubt that the Justice Department is overstating the lasting, worldwide effect of justly applying money laundering laws. However, the drawbacks to enforcing laws against what’s estimated to make up a third of all transactions are very real. In this reality, it’s legitimate to ask whether laws against money laundering should be applied to anyone.

Money laundering is, simply, the process of concealing sources of money. While the standard image of money laundering involves murders, Mexican narco-gangs, and Al Qaeda, in reality there are many reasons that normal people would want to keep their transactions anonymous — which is a big reason why Bitcoin gained popularity with libertarians in the first place.

As J. Orlin Grabbe wrote, “Anyone who has studied the evolution of money-laundering statutes in the U.S. and elsewhere will realize that the ‘crime’ of money laundering boils down to a single, basic prohibited act: Doing something and not telling the government about it.” Criminalizing this means that by default government has the right to know the source of all of every citizen’s money. In some jurisdictions, money laundering can be just using financial systems or services that do not identify or track sources or destinations.

Writing in American Banker, Bitcoin advocate Jon Matonis explains that “from President Roosevelt’s 1933 seizure of personal gold to the Nazi confiscation of Jewish wealth to the recent deposit theft at Cyprus banks, asset plundering by governments has a long and colorful tradition. Protecting wealth from oppressive regimes continues to this day.”

In that piece, Matonis calls money laundering the thoughtcrime of finance, a sentiment that’s gained traction in libertarian circles. Hiding or failing to report where money comes from is, in and of itself, a victimless crime. The theory is that everyone owes it to the government to make enforcing laws against violent crime easier. But that’s not really accurate, as most of the laundered money is used in other crimes whose violence stems from their being illegal, such as gambling and the drug trade.

This reporting to the government comes at a significant cost, both in terms of resources and privacy.

The Economist has estimated the annual costs of anti-money laundering efforts in Europe and North America to be in the billions. Even its most legitimate function, trying to keep people from financing terror, has been deemed a costly failure by the magazine. Curiously enough, The Economist concedes that efforts to reduce identity theft and credit card fraud are most effective at combating money laundering.

Perhaps this cost could be justified if the information gathered through the reporting requirements was used to cut off funds to terrorists. But as the HSBC case shows, that’s not the case. After getting notice after notice about failing to properly report on its customers, HSBC simply hired former call center employees to “investigate” cases of money laundering to unsavory characters. And when one employee actually did, he was fired.

Besides costing billions, efforts to stamp out money laundering also erode privacy. Ensuring every transaction is above board forces banks to be cops through so-called “know your customer” laws. These laws essentially conscript private businesses “into agents of the surveillance state,”according to the American Civil Liberties Union. Bitcoin offers an interesting counterpoint: Even if accounts may be anonymous, transactions are all public, which is a level of transparency not seen in the fiat currency system.

So why does alleged Bitcoin laundering deserve jail time? On a pure cost-to-benefit basis, perhaps it makes sense to jail Shrem while giving HSBC executives a slap-on-the-wrist fine. Revoking the bank’s license would rock the entire financial system, while Shrem’s enterprise was already on hold at the time of his arrest.

However, laws which result in jail time for minor infractions while the worst offenders walk free deserve their own cost/benefit analysis. If money laundering laws are worth their cost to companies, to the government, and to privacy, surely they are worth applying fairly and evenly. If not, perhaps its time to rethink whether they make sense at all.

Cathy Reisenwitz
for The Daily Reckoning

Ed. Note: There are thousands of US laws that make no sense but exist under the auspices of “government knows best.” But that doesn’t mean you have to take it lying down. Sign up for the FREE Laissez Faire Today email edition, and start living a happier, healthier life outside the prying eyes of the government.

Is the Stock Market Set for a Massive Rally?

History shows that October market weakness leads to big gains. Michael Covel reveals how to best capture a potential rally while protecting against any downside risk..

Cathy Reisenwitz is an editor at Young Voices and a D.C.-based writer and political commentator. She is editor-in-chief of Sex and the State, and her writing has appeared in Forbes, the Chicago Tribune, Reason magazine, Talking Points Memo, The Washington Examiner, and the Daily Caller.