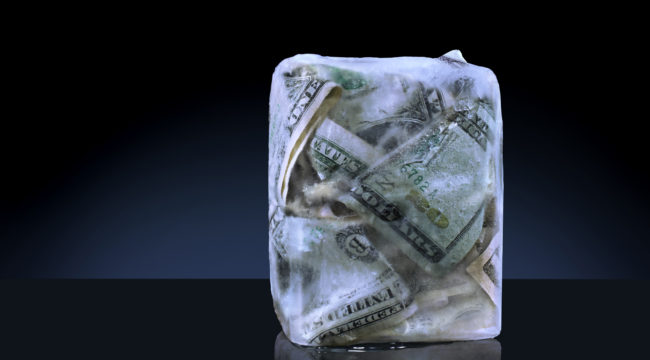 I am often asked, “Does Ice-Nine put gold at risk of lockdown or confiscation?”

First, Ice-Nine is a phrase borrowed from author, Kurt Vonnegut. Vonnegut wrote a book in the early 1960s called Cat’s Cradle, and it’s a doomsday scenario.

Number one, it has a melting point of 114.4°F. Which means it’s frozen at room temperature. The other characteristic is if a molecule of Ice-Nine comes in contact with a molecule of water, the water turns to Ice-Nine. In other words, it turns to a form of ice.

The plot of the book was that there was only a small amount of this Ice-Nine and the scientist gave it to his three children in vials. As long as the vials were sealed, it was all good. If you open the vial and pour the Ice-Nine into a stream, the stream would freeze, then the lake would freeze, a river would freeze, a ocean would freeze, the entire plant would freeze. We would be in a new ice age and life on Earth would be wiped out.

I took that as a metaphor to explain what’s going to happen in the financial system and the next financial crisis. This is really what my book The Road to Ruin is about.

(I describe all the critical details in The Road to Ruin. Go here now to get your copy for free, instead of paying the full $23).

It the crisis of 1998, which I was very involved in negotiating a solution, prior to the crisis of 1998. What we saw in 1998 was Wall Street get together and bail out the hedge fund Long-Term Capital Management. Then in 2008, the central banks got together and bailed out Wall Street. In the next crisis, 2018, maybe sooner, maybe tomorrow, who’s going to bail out the central banks?

Central banks have printed so much money already, it’s not obvious that they can do it again from the current levels without destroying confidence in the dollar, and all major currencies.

The question is, where will the liquidity come from in the next financial crisis if it can’t come from the central banks?

The answer is the IMF. The International Monetary Fund has the only clean balance sheet out of the major financial institutions. It can print money. They call it the SDR, the Special Drawing Rights. I call new world money.

The IMF can flood the market, and the world with trillions of SDRs equivalent to more than trillions of dollars which is exactly how they’ll do it. There is a problem with this model at the IMF though. It’s got a 24-member executive committee representing 24 nations around the world, or groups of nations. Every five years they change the voting rights.

It so happens that 2017 is one of those five-year reviews where they’re going to increase the voting rights of Brazil, Russia, India, China and South Africa (BRICS). The so-called BRICS are going to get more votes and potential veto power within the IMF model.

When it comes time for the IMF to issue world money (SDRs) to reliquify the world, there’s going to be a negotiation period. It will to take months to complete. During the last crisis this took 11 months. That was when the crisis hit in September, 2008 we saw Lehman Brothers hit a crisis, the IMF began to issue SDRs in August 2009.

Even though they react on a case basis, it’s going to take, an estimated 3 or 4 months at least to get SDRs issued. In that interim period between the crisis and the time the IMF can react, central banks will be paralyzed. They’re likely going to lock down the system.

That will not be true in this crisis because everyone will be doing the same thing. That is what happened in 2008 when Ben Bernanke and Hank Paulson went to the White House and said to the President that the system’s melting down and he must act.

That was such a shock then, that when it happens again they’re not going to give you your money. They’re going to lock it down. The problem is, and this is where the Ice-Nine metaphor comes in, is that when it is spreading you can’t just lock down part of the system.

The metaphor of Ice-Nine is that it spreads from molecule to molecule, institution to institution, requiring a freeze on the entire system.

The question is, how do you protect yourself against that? There’s only so much you can do.

I don’t recommend running down and pulling all your money out of the bank. I would not have more than the insured amount, which in the U.S. is $250,000. You can spread it between your selected banks so that each is backed and insured up to the limit.

The thing about gold and silver is that it needs to be in physical form, in safe storage, and a non-bank. Putting it in a safety deposit box in a bank is troublesome because by the time you want it the most, that will be when the banks are going to be closed.

That’s Ice-Nine. In the world described, the dollar price of gold will be approach the $10,000-level if not much higher. Don’t wait on gold, because when all of this begins to play out, you’re not going to be able to get gold.

Ice-Nine is a freeze of the financial system, it’s something that’s happened before, it’ll happen again in the next crisis. Physical gold and silver is the answer to Ice-Nine, and you should get it while you still can.