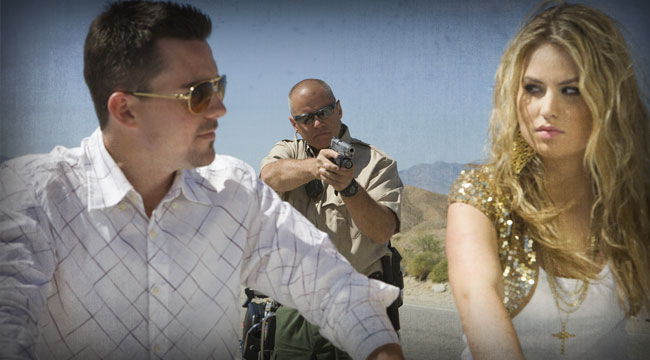 How Your License Plate is Being Used Against You

“You’re a liar!” the police officer yells. “You’re lying to me. Your family says you have it. Where is the gun?”

Your hands are behind your head, your legs spread apart. The officer radios in for backup, and three more police cruisers arrive on the scene. They separate you from the rest of your family before they start searching your car. Out come your suitcases as well as some presents you bought for your family.

This goes on for hours… right on the side of a major highway. There’s no gun in your car, but that doesn’t stop them.

No, this isn’t a scene from a dystopian science fiction novel. This is what could happen if you happen to be driving through the state of Maryland.

On Dec. 31 of last year, John Filippidis and his family were returning to their home in Florida after a vacation in New Jersey. John, his wife, and three daughters, were traveling near Baltimore (where Laissez Faire’s home offices are) when their nightmare began. After being pulled over, John provided all the information he was supposed to.

But there was something wrong about this whole scenario… John wasn’t pulled over for speeding.

Everyone is under constant surveillance, because it could potentially stop a crime.

Eventually, the officer returned with John’s documents. Then he demanded to know where his gun was. John knew it was back in his safe in Florida. But how did the officer know about it in the first place?

The police questioned each family member separately. And John’s wife, confused about what was going on, let slip that the gun “might” be in the glove box or center console. That’s when things got really dicey.

The police never found the gun. In the end, John and his family ended up with a “warning citation” for speeding. But the real question was how these Maryland police officers knew he had a gun in the first place. And was he really stopped because he was speeding… or was there something else at the root of things.

It turns out that John not only owns a gun, but he also has a concealed carry permit issued by the state of Florida. The officers in Maryland knew this because law enforcement agencies throughout the country share gun ownership information with other state and federal agencies. Anyone with access to these databases would have known all of John’s information.

Let’s make sure you did not miss that. Personal information about law-abiding people without criminal records is collected, stored, and shared among law enforcement agencies as part of their “standard operating procedure.” A few decades ago, you might have called this mass surveillance and unreasonable search and seizure.

Now you have to wonder what other information they’ve gathered without your consent.

So how did a cop in Maryland “know” that a guy from Florida driving through the state owned a gun? And what reasonable cause did the officer have to pull that guy over?

Maryland has some of the strictest gun control laws in the country. The state also does not honor any other state’s licenses or permits and looks for opportunities to hassle concealed carry permit holders who might be illegally transporting a gun.

If this theory is correct, Maryland made several assumptions about John based on information collected with an ALPR device:

1. He was transporting a firearm through Maryland

2. He was transporting it improperly and violating Maryland law

3. They’d be able to come up with some probable cause to stop and search his car.

All these assumptions fly in the face of the “presumption of innocence.” But more important than that, it raises serious questions about what information they have about you in these databases.

The use of ALPR technology is far more insidious than a “license and registration check.” People aren’t aware they’re under surveillance, nor that the information can be used against them. Second, ALPR technology is automatic. Police can read your license plate and transmit to any nearby officers any relevant information.

Even if you give the police the benefit of the doubt that this technology would alert police to a stolen car in their vicinity, that’s not the issue at stake. Just because it makes the police’s job easier doesn’t give them the right to chip away at your right to privacy. Right now there’s a massive database with information about millions of Americans.

Everyone is under constant surveillance, because it could potentially stop a crime. Sound familiar?

Over time, the data collected by this ALPR technology can create a digital map of your activities. Overzealous government officials might look at the data and see something that’s not really there. You happen to drive by a street corner when someone on a terrorist watch list places a phone call. Or you’re eating dinner at a restaurant where several persons of interest gather for a meeting.

Separately, they mean nothing. But the dots are there. And someone might think it’s a good idea to connect them.

Think about your daily commute. Where you drive. What red flags might pop up as you drive to and from your job? Would you want ALPR device data stored in computer servers that show:

You’re doing nothing wrong, but assumptions can arise over time.

And we have evidence that the police in at least one major city have plans to “mine” the data to assist them in solving future crimes. In a recent case before the Superior Court of California, lawyers for the Los Angeles Police Department have made the department’s position clear. They stated:

“ALPR data also has investigative use long after the initial scanning process, as demonstrated by its instrumentality in helping LAPD solve a variety of serious crimes… The very process of checking license plates against various law enforcement lists, whether done manually by the officer or automatically through ALPR technology, is intrinsically investigatory — to determine whether a crime may have been committed. The mere fact that ALPR data is routinely gathered and may not — initially or ever — be associated with a specific crime is not determinative of its investigative nature.”

According to the LAPD, any vehicle on the road is “under investigation,” so they’ll have a lot of leeway in using this technology.

These searches ultimately amount to unreasonable searches and seizures of your information. Unfortunately, the courts don’t see it that way. They’ve found that you have no expectation of privacy once you enter your car. That doesn’t necessarily mean they can stop you without some kind of probable cause, but it does give them a lot of leeway on how much data they can collect from you while you’re driving.

Ed. Note: Your car isn’t the only place you’re vulnerable. And if you were a reader of the FREE Laissez Faire Today email edition, you’d know there are plenty of threats you encounter everyday, possibly putting your personal information at risk. Click here to subscribe to Laissez Faire Today’s daily email, for FREE, and you’ll never miss an update about the latest security risk.