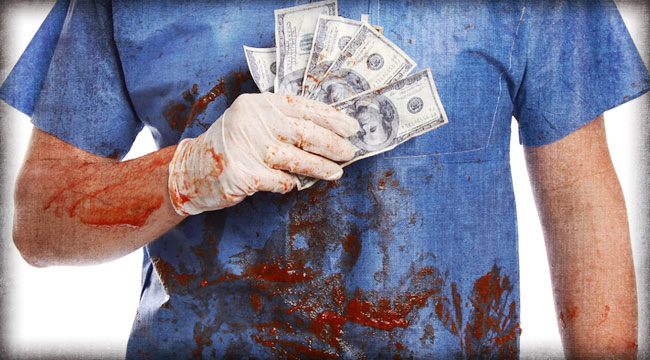 How Unethical Doctors Profit from Obamacare

Do you trust your doctor? Most patients assume their doctor is working in their best medical interests whenever he or she orders a diagnostic test or recommends a particular treatment. Customers might wonder whether an unscrupulous auto mechanic is being truthful when he recommends a brake job or a new transmission. But most patients trust that their doctor isn’t recommending unnecessary surgeries merely to line his pockets.

The vast majority of doctors take their ethical responsibilities very seriously. Prior to Obamacare, only a relatively few “bad apples” have chosen to compromise their professional ethics for financial gain. However, Obamacare creates new ethical conflicts for doctors. We’ll examine some common physician conflicts of interest before and after Obamacare, and discuss how patients can best protect themselves.

Most doctors practice in a “fee for service” model, where they are paid for each service provided. This is routine in the rest of the economy — for example, consumers pay for each item purchased at the grocery store or each oil change for their car. However, fee for service can also create perverse incentives for unnecessary medical treatments, just as a dishonest auto mechanic has a perverse incentive to recommend unnecessary repair work.

Unethical doctors can be tempted to “do more procedures than necessary…”

Unethical doctors aren’t usually quite as brazen as unethical auto mechanics, especially with major procedures such as surgery. But there are more subtle ways doctors can inappropriately pad their income. For example, a physician might order blood work on his patients — but preferentially direct his patients to a lab where he has an ownership stake (even if an independent lab down the street is less expensive and more accurate). This allows him to collect a portion of the lab’s “technical fee” for performing each test.

Similarly, a recent study in the journal Radiology suggests that physicians order more unnecessary MRI tests when they have an ownership stake in the lab:

Knee MRI exams are more likely to be negative if ordered by physicians who have a financial interest in the imaging equipment being used… “We believe that the inherent conflict of interest present when physicians both order and then perform and collect fees on the basis of the acquisition of MR imaging examinations is an important factor to consider whenever the matter of healthcare cost is raised,” wrote lead author Dr. Matthew Lungren, from Duke University Medical Center…

(The authors also note: “Although our study does suggest a bias toward increased utilization of MR imaging of the knee by physicians who own MR imaging equipment, by itself it does not prove intended overutilization for profit…”)

The New York Times also recently reported that, “Doctors who have a financial interest in radiation treatment centers are much more likely to prescribe such treatments for patients with prostate cancer.” Likewise, The Wall Street Journal has reported on potentially significant conflicts of interests when spine surgeons participate in “physician owned distributorships”:

Physician-owned distributorships, or PODs… act as intermediaries between medical-device makers and hospitals: In exchange for marketing and stocking devices, the distributors get a cut of each sale. When surgeons own the distributorship, that commission goes into their pockets. And since surgeons often dictate to their hospitals which devices to buy, they can effectively steer business to themselves.

Unethical doctors can thus be tempted to “do more procedures than necessary and to favor devices they profit from over more ‘clinically appropriate’ ones.”

If a doctor seems to be pushing an unnecessary surgery, patients should seek a second opinion. Patients can also consult resources such as ProPublica’s “Dollars for Docs” website, which lists which doctors have received money from the pharmaceutical industry.

Of course, many doctors have legitimate consulting relationships with pharmaceutical companies and medical device manufacturers. Many important medical innovations have arisen from close collaborations between practicing physicians and private industry. Similarly, some physicians may prefer sending patients to testing facilities they also own and manage, because they can ensure the tests are performed to their precise specifications.

Physicians routinely disclose relevant financial and consulting relationships when speaking at scientific or educational conferences. Patients should feel free ask for that same information from their own doctors. Good doctors will not be offended if patients politely ask about potential financial conflicts of interest, just as they will not be offended when patients seek a second opinion about medical issues.

Obamacare also creates new conflicts of interest for physicians. One of the primary goals of Obamacare is to control health costs (i.e., “bend the cost curve downward”). Under Obamacare, doctors will face increasing incentives for undertreatment rather than overtreatment.

For example, Obamacare includes pilot programs to replace the current fee for service model with “bundled payments.” Hospitals and doctors would receive a fixed sum for treating a patient’s condition (e.g., pneumonia or stroke), regardless of what it costs the providers. If the hospital and doctors treat the patient for less than the bundle, they keep the excess. But if their costs exceed the bundled payment, they must absorb the loss. In theory, bundled payments eliminate incentives to overtreat patients. But they can also create dangerous incentives to undertreat.

A hospital administrator might ask a physician, “Does Mrs. Smith really need the stronger, more expensive antibiotic that covers 99% of the bacteria? Or can she get by with the cheaper drug that only covers 85%? We’ve already burned through her bundled payment for this hospital admission, so anything we do now comes out of our pockets!”

The federal government has also proposed linking physician payments to “appropriate use criteria.” Such government practice guidelines may be appropriate for many patients. However, there will always be patients who don’t fit the guidelines. In those cases, doctors will have to choose between what’s medically appropriate for their patient vs. adhering to the government-approved treatment guidelines.

Suppose you see your doctor for a severe headache. He examines you and says, “Nope, you don’t need an MRI scan. Take two Tylenol and call me in the morning.” Is he acting in your best interests? Or is he being inappropriately swayed by government practice guidelines intended to limit MRI usage?

To cut costs, many Obamacare exchange plans also require “narrow networks” of providers, where patients may only receive treatment from a short list of approved hospitals and doctors. President Obama has repeatedly promised, “If you like your doctor, you can keep your doctor,” but many patients are learning the hard way that this isn’t true.

Such “narrow networks” also mean that many doctors will lose long-standing relationships with patients they’ve seen for years. Instead, doctors will be increasingly reliant on the government-run exchanges for new patients. This will create a powerful incentive for physicians to adhere to any treatment guidelines mandated by the government or by government-approved insurance plans.

Patients should also consider paying cash when appropriate. New federal regulations allow patients who pay cash to request that the details of their medical care not be sent to insurance companies. This frees your doctor to concentrate on doing what’s best for you without worrying that his treatment decisions might skew his practice statistics.

Some patients may also benefit from “direct pay” or “concierge” practices outside the standard insurance system. This allows the doctor to work for the patient, without interference from the government or government-controlled insurers.

Prior to Obamacare, a few unethical doctors have always been tempted to overtreat patients. The big unknown is how physicians will respond to new incentives created by Obamacare to undertreat patients. Obamacare will divide doctors’ loyalty between the government (which will increasingly control their salaries) and you, the patient. How exactly that loyalty will be split will depend on each individual doctor. As economists say, “Incentives matter.” Under Obamacare, you should take steps to make sure your doctor still puts your medical interests first.

Paul Hsieh
for The Daily Reckoning

Ed. Note: The Obamacare nightmare is just beginning. Only time will tell how bad it gets. Mr. Hsieh offers some sage advice above – which will certainly aid you in keeping the negative effects of Obamacare at arms length. But if you’d like to “opt-out” of it altogether, you need to read the free report “4 Ways to ‘Opt-Out’ of Obamacare,” which you can access by signing up for the FREE Laissez Faire Today email edition. Not only that, by signing up for Laissez Faire Today, you’ll also get expert commentary on liberty, freedom and how to live a life outside the prying eyes of the government – including regular chances to discover real, actionable profit opportunities. So don’t wait, you’ve got nothing to lose and a lot to gain. Sign up for FREE, right here.

Have the Neocons Gotten to Trump?

David Stockman wonders if the war hawks in the Trump administration have finally gotten to him. What’s really going on? Read on.

Paul Hsieh is a physician with long-standing interests in health policy, medical ethics, and free-market economics. He is also the co-founder of Freedom and Individual Rights in Medicine (FIRM).