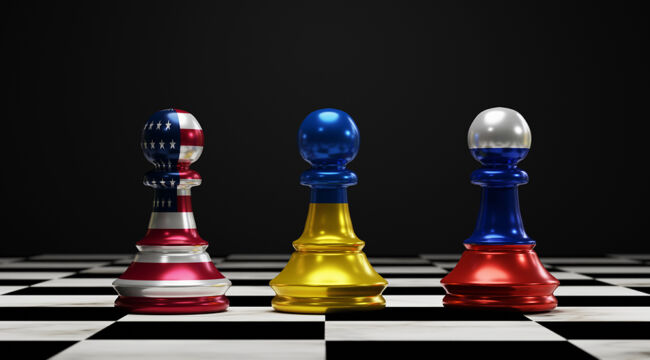 How Did the U.S. Lose Russia?

With all the world’s attention on the situation in Ukraine, today I want to focus in on the larger geopolitical picture involving the U.S., Russia and China.

Russia, China and the U.S. are the only true superpowers and the only three countries that ultimately matter in geopolitics. That’s not a slight against any other power. But all others are secondary powers (the U.K., France, Germany, Japan, Israel, etc.) or tertiary powers (Iran, Turkey, India, Pakistan, Saudi Arabia, etc.).

One of the keys to U.S. foreign policy in the last 50 or 60 years has been to make sure that Russia and China never form an alliance. Keeping them separated was key.

Playing One Player off Against the Next

One leg of the China-Russia relationship is their joint desire to see the U.S. dollar lose its status as the world’s dominant reserve currency. They chafe against the ways in which the U.S. uses the dollar as a financial weapon.

But ultimately, this two-against-one strategic alignment of China and Russia against the U.S. is a strategic blunder by the U.S.

The U.S. is the sucker in this three-way game of poker. The fact is Washington has squandered a major opportunity to turn it in America’s favor.

‘What Were They Thinking?’

When future historians look back on the 2010s they will be baffled by the lost opportunity for the U.S. to mend fences with Russia, develop economic relations and create a win-win relationship between the world’s greatest technology innovator and the world’s greatest natural resources provider.

It will seem a great loss for the world. Here’s the reality:

Russia is the nation that the U.S. should have tried to court and should still be courting. That’s because China is the greatest geopolitical threat to the U.S. because of its economic and technological advances and its ambition to push the U.S. out of the Western Pacific sphere of influence.

Russia may be a threat to some of its neighbors (ask Ukraine), but it is far less of a threat to U.S. strategic interests. It’s not the Soviet Union anymore. Therefore, a logical balance of power in the world would be for the U.S. and Russia to find common ground in the containment of China and to jointly pursue the reduction of Chinese power.

Of course, that hasn’t happened. And we could be paying the price for years to come. Who’s to blame for this U.S. strategic failure? You can start with the globalist elites…

All About Getting Trump

Yet the elites seized on this to concoct a story of collusion between Russia and the Trump campaign. The real collusion was among Democrats, Ukrainians and Russians to discredit Trump.

Whatever you think of Trump personally, the collusion story was always bogus.

So Russia became public enemy No. 1 because of politics. Ironically, the same people who were soft on the Soviet Union today are often the biggest Russia hawks.

Could Russia and China Circle Eurasia?

A strategic goal of the U.S. has been to ensure that no power, or combination of powers, could dominate the Eurasian landmass.

But Russia and China could be cooperating to do just that, to strategically encircle Eurasia. Here’s what I mean:

Much of the early exploration by Europeans of New England and the Canadian Maritime provinces was not based on a desire to settle and farm but was driven by a search for the “Northwest Passage.”

This was the name given to a hypothetical sea route from the Atlantic to the Pacific somewhere between North America and the North Pole that would allow direct sea transportation from Europe and Asia without having to navigate the Cape of Good Hope or Cape Horn around Africa and South America, respectively.

Early voyages up the St. Lawrence, Hudson and Delaware rivers were driven as much by the hope that explorers would find a Northwest Passage as they were by indigenous exploration.

The Northwest Passage was never found.

It existed on a map north of Canada, but that route is frozen most of the year and extremely dangerous because of ice and bad weather, even when it is not entirely frozen. But that was then.

Today, with some help from warmer temperatures, improved icebreakers and GPS navigation, vessels can now routinely make the passage.

China and Russia are now prepared to pick up where the 17th-century explorers left off.

Russia has its own Arctic passage between its northern territory and the Arctic Circle similar to Canada’s. It has also made strides in opening up its Arctic sailing routes through the East Siberian, Kara and Barents seas with connections to Moscow, St. Petersburg, the Baltic Sea and the ports of Europe.

Meanwhile, China has been building a new maritime “Silk Road” around South Asia, Africa and the Middle East that would facilitate Chinese trade with countries in those regions (and, not coincidentally, enhance the operational flexibility of an expanding Chinese navy).

The combination of an Arctic passage and China’s Maritime Silk Road would encircle much of the Eurasian continent by sea. That opens up potential for wealth creation (and military dominance) that early explorers could only dream.

The U.S. would largely have itself to blame.