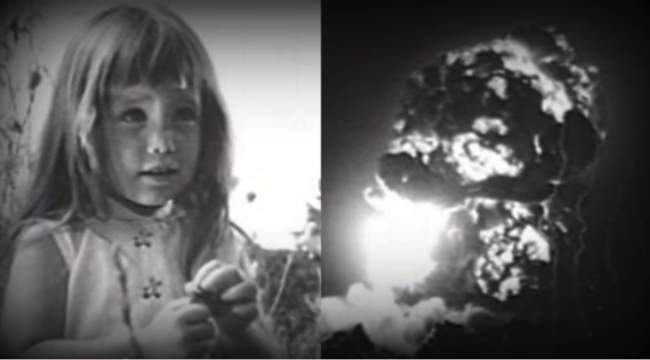 How Hillary’s Going to Beat Trump

In it, a little girl walks through a field and picks up a daisy…

She starts plucking its petals and innocently counting: “One… two… three…”

Then, a man’s doom-laden voice drowns her out and starts counting backwards: “Ten… nine… eight…”

The countdown ends. And the screen erupts in an atomic explosion.

Then you hear President Lyndon B. Johnson’s words: “These are the stakes… to make a world in which all of God’s children can live, or go into the dark. We must either love each other or we must die.”

The “Daisy Girl” ad aired only once… but it fundamentally changed the landscape of American politics.

In short, it showed how effective fearmongering could be…

Barry Goldwater made the mistake of saying he wanted to make it easier for the armed forces to use nuclear weapons if needed.

Regular readers are familiar with the Deep State, of which Johnson was a card-carrying member.

It’s the shadow government of elites, lobbyists, bureaucrats, politicians, cronies and military-industrial complex members who pull the levers of power behind the scenes.

It told us we needed to invade Iraq because Saddam Hussein had weapons of mass destruction. If we didn’t there’d be a nuclear mushroom cloud in Manhattan.

It told us we needed to bailout Wall Street in 2008 because the entire global financial system would collapse if we didn’t.

And it told us the NSA needed warrantless snooping on hundreds of millions of unsuspecting Americans in order to keep us safe from terrorism.

But all of those interventions just made the Deep State richer and more powerful… not the American people.

The fact is fear works. It touches on some of the deepest anxieties voters have about their own security.

Trump Will End the World

Clinton started her fear-based “hair on fire” attack on Trump with this gem: “This is not someone who should ever have the nuclear codes. It’s not hard to imagine Donald Trump leading us into a war just because somebody got under his very thin skin.”

Then she wheeled out Larry Summers to keep the fear train barreling down the tracks. If you recall, Summers was Treasury Secretary in her husband’s administration. He’s basically family.

Summers took to the Financial Times to warn that the economic consequences of President Trump would be “severe” and would start the “worst trade war since the Great Depression.”

See how they execute their game plan?

In Senator Elizabeth Warren’s book, A Fighting Chance, she recounts a dinner with Larry Summers.

Here’s what he told her…

“I had a choice. I could be an insider or I could be an outsider. Outsiders can say whatever they want. But people on the inside don’t listen to them. Insiders, however, get lots of access and a chance to push their ideas. People — powerful people — listen to what they have to say. But insiders also understand one unbreakable rule: They don’t criticize other insiders.”

Trump’s not an insider. And he’s made no bones about his desire to turn insiders like Clinton and Summers into outsiders.

Look, Clinton has been inside the Deep State’s corridors of power for decades. She and her intern-based husband have cashed in on those connections to make a $150 million personal fortune through phony Wall Street speeches and their “charity” slush fund bankrolled by third-world dictators.

And Summers has gotten rich making multiple passes through the revolving door of government and Wall Street.

They both need to keep the gravy train flowing.

Not surprisingly, they’ve played the fear card to annihilate Trump.

So be prepared for the ultimate Trump “Daisy Girl”-type ad soon to come from the Clinton camp. It’s guaranteed.

What Does This All Mean to You?

It means that instead of facing criminal charges for her server illegalities, Hillary is set to assume control of the White House.

That means the current American status quo, which is already off the rails, is about to go hyper-drive nuts.

And a new round of Clinton scandals led by her bored husband looking for a good time.

Sadly, millions of Americans will stand and cheer for the $12,000 Armani pantsuit as she launches this ambitious agenda to complete America’s transition to a full-blown idiocracy.

Meet your new President! She is here to help the downtrodden! Excuse me for a moment while I clear the vomit from my throat.

What are our options in the face of the Clinton blitzkrieg?

There is one option.

In the investment world, that means having a strategy that’s specifically designed to weather any storm and perform well in any type of market environment… like trend following.

Please send me your comments to coveluncensored@agorafinancial.com. Let me know what you think of the coming Clinton blitzkrieg.