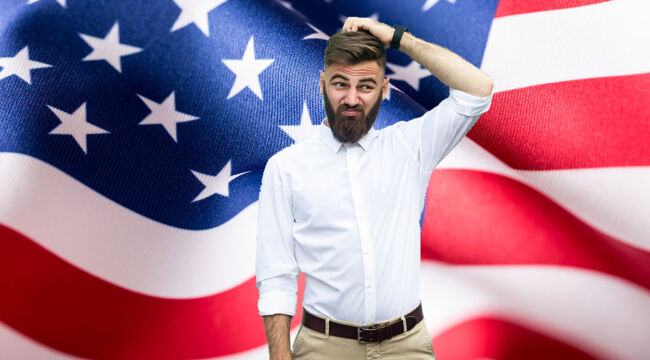 The American people have spoken. But what did they say?

We do not yet know.

The telephone connection was poor. Their message was garbled, jumbled, indecipherable.

The static may not clear for days… or even weeks.

Certain outlets have placed Wisconsin and Michigan in the Biden camp.

But the incumbent has demanded a recount in the Dairy State of Wisconsin. Why?

There have been reports of irregularities in several Wisconsin counties which raise serious doubts about the validity of the results.

As Josef Stalin probably never said… “It’s not who votes that counts, it’s who counts the votes!”

We allege no impropriety in the Dairy State of course. We retain the deepest faith in the pristinity of American democracy… and the saintly virtue of its election officials.

We merely state a truism.

The president has also challenged Michigan’s results, on identical grounds. He is preparing legal action in Pennsylvania should his present lead evaporate.

And he retains faith that Arizona is not yet lost.

The winner must fetch 270 electoral votes. Officially, Mr. Biden has 238 in his hip pocket — at least to our understanding. The president has 213 in his.

Thus the challenger enjoys a shorter route to victory.

A winner cannot yet be announced, it is true. Yet we can announce a definitive loser — or losers: Pollsters.

Many had Mr. Biden trouncing the president by high single-digits. Some yielded Trump perhaps a 10% chance of victory.

He may lose yet. The election nonetheless remains a nail-chomper, a near-run thing.

For months Jim Rickards has argued these polls to pieces, insisting they gave false positives for Biden. He stands vindicated in the overall.

It is true, Jim predicted a slender Trump victory. Yet he did grant the authentic possibility of a Biden win:

My models project that Trump will win, but I’d be the first to admit that the uncertainty factor is high, and a Biden victory is certainly possible. Too many variables are involved this year to draw a decisive conclusion. I was more confident of a Trump win in 2016 than in this election.

A cowardly hedge, an artful dodge, a craven yearning to have it both ways?

In our telling, no. Jim had to navigate hair-thin margins in key states. A nudge here, a jostle there could swing the entire vote.

But now the all-important question: What next?