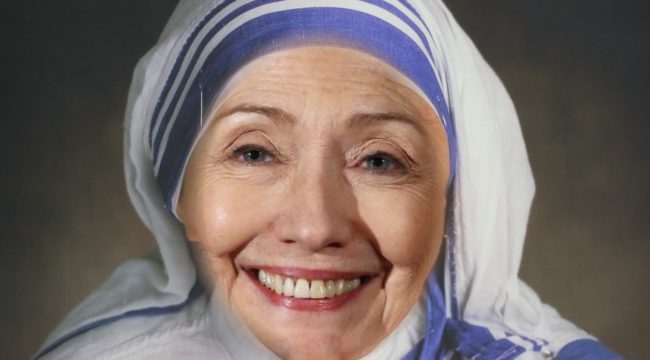 Hillary Clinton’s campaign website says her “commitment to public service and fighting for others – especially children and families – has stayed with her throughout her life.”

She’s such a selfless giver… just a sweet lady… a lovely heart of compassion… a gentle soul trying to make a difference in the world… dressed smartly as Kim Jong-Un’s doppelganger.

Hold on a second, I need to finish puking…

The dictionary defines “public service” as something that’s done to help people rather than to make a personal profit.

So how exactly has Clinton amassed a Gordon Gekko-style fortune of more than $150 million through her supposed self-sacrificing commitment to helping others?

From 2001 to when she launched her presidential campaign in 2015, Hillary and Bill Clinton were paid off a staggering $153 million.

Let’s recall how the “Clinton gets loaded” scheme works…

Hold on, what’s wrong with that? All that time spent in “public service” doesn’t pay $153 million no matter how you slice the cards. Plus, her girl-chasing husband wasn’t exactly managing a macro-event hedge fund during that span. And you sure don’t make that jack from a presidential pension.

So how did they get their hands on a sum of money that African warlords running weapons would respect?

It’s not that hard to do when you pimp out your office to crony capitalists, despotic Middle Eastern regimes and Third World monsters tied to human rights abuses… all to line your own pockets with gold.

Exhibit A: As Secretary of State, Hillary helped win approval for Russia’s state nuclear agency to buy a controlling interest in one of America’s largest uranium mines, despite the potential threat to U.S. national security.

Not surprisingly, just after that, Bill Clinton received a $500,000 speaking fee from a Russian investment bank with Kremlin ties.

You think that’s just a coincidence? Hell no. A job well done and she got paid ­– indirectly through Slick Willy, of course.

Exhibit B: The IRS was suing Swiss bank UBS to get the identities of Americans with secret accounts. Hillary intervened and arranged a settlement to UBS’ swift benefit.

Soon after, Bill, otherwise known as Lewinsky’s ex, received a tidy sum of $1.5 million to appear at a few UBS social events – to ostensibly chat up investment bankers about the optimal use of Tinder for dating younger women.

Just another freak coincidence you say?

Wait, it gets better.

Exhibit C: Hillary presided over State Department studies that said the Keystone XL pipeline would pose very few environmental risks, and that her department was “inclined” to support the project.

This enraged diehard environmentalists in Clinton’s own party who expected her to kill any pipeline.

But what they didn’t know was that the Clinton tag team had scored a boatload of speaking fees from one of the Keystone XL pipeline’s largest investors: TD Bank.

So was this just another wild coincidence? Only to someone who’s had a full-frontal lobotomy with an ice pick.

The bottom line is there’s a direct connection between Hillary’s “public service” and the immense growth in the Clinton family’s fortune – easily projected to exceed $1 billion in the years to come.

And it goes beyond just slushing millions upon millions directly into the coffers of Arkansas’ First Family.

Hillary also used her State Department “service” to obtain at least $2 billion in “donations” (read: kickbacks) to the Clinton Foundation.

If you recall, the Clinton Foundation began in 2001 with the purpose to “convene global leaders to create and implement innovative solutions to the world’s most pressing challenges.”

In reality, it’s just an international sovereign wealth fund the Clintons have used to cement their power and fund their jet-setting lifestyle – you know, the jet-setting where Bill flies around with convicted pervert Jeffrey Epstein.

Back to the nobility of the Clintons’ charitable efforts…

Their “charity” only gives out less than 10% of its donations in aid. And the bulk of its cash hoard has been used to pay for “F-you” travel expenses, salaries and bonuses ­– with the biggest cash payouts going to their family and friends.

I wonder if the Clintons have developed a special family cheer every time another million comes in for the poor kids? Or do they just go straight to the mall and load up on more Versace?

Why in the world would anyone donate to such a scam?

This headline from Vox tells you all you need to know…

“At least 181 companies, individuals, and foreign governments that have given to the Clinton Foundation also lobbied the State Department when Hillary Clinton ran the place.”

I’m sure there was no connection between the two. Those entities only donated to make the world a better place, save the oceans, cure diseases and feed starving children. They had zero interest in receiving any special favors from the Clinton “A Team.”

It’s all just another attack on the Clintons organized by the vast right-wing conspiracy, right?

In Service to Hillary

Readers often ask me how anyone could vote for Hillary knowing that her corruption rivals characters in Martin Scorsese’s “Goodfellas.”

My answer is quite simple…

Half the electorate is on welfare, dead broke and doesn’t care about anything except watching the next underage Kardashian parading her fake boobs across Instagram.

Doubt me? In a Fox News poll, 50% of those polled said Hillary should keep running for President even if she gets indicted for her email server scandal.

Don’t blame them. They just need the gravy train of social programs and entitlements to keep flowing or they will go zombie-style looting and rioting. (Oops, that’s their weekend either way.)

And to the big boys, the members of the Deep State bankrolling Hillary’s campaign, her corruption is actually responsible for her appeal.

When she wins, global elites who denigrate women, crony capitalists, dirty foreign governments and international dictators on the lam will want favors from the President of the United States… not just a cabinet official at the State Department.

That means shady global operations involved in forced labor, modern slavery, human trafficking and the worst forms of child labor will have a seat at the Clinton “commitment to public service” table.

Look, the Deep State is trading up and going all in to get Hillary elected. That means the Oval Office will be officially open for business, not that it makes a huge difference cause the Clinton camp has been open for a long time.

All of this is bad news for the country, but it’s freaking great news for the Clintons’ assorted offshore savings accounts.

Don’t ever forget the perverse Clinton definition of “public service” ­– all of us on bended-knee licking their boots. Because to the First Family of Arkansas, we should all be so lucky to provide them our service.