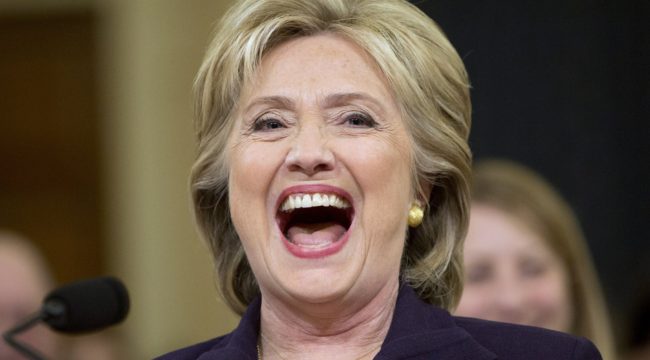 The Clintons are back, baby!

After the FBI let Hillary off the hook yesterday for illegally keeping classified material on her personal servers, Arkansas’ first family of con artists are strutting around like O.J. after beating his murder rap.

They’re untouchable now… and they know it.

This was the one that many thought would finally snag them. But they walked yet again.

No Longer a Nation of Laws

Let’s face it: The rule of law is for the little people of this world.

Consider that Federal code 18 U.S.C Sec. 793(f) makes it unlawful to send or store classified information on personal email. And that’s just what Hillary did.

He also confirmed that Hillary didn’t hand over thousands of her State Dept. emails, even though she swore under penalty of perjury she had done so.

You do those things and you’re wearing an orange jumpsuit making license plates for a decade. That’s what the law dictates.

But this isn’t happening for a Clinton under Obama’s Attorney General. That’s because there are two separate versions of American jurisprudence. One version is reserved for Deep State members like her. The other is served cold to the peasant class.

Just ask Bryan Nishimura, a former Naval reservist who was charged with having classified material on his personal device—the same as Clinton. He pled guilty to unauthorized removal and retention of classified materials. He was fined and his security clearance was stripped.

For Hillary’s “carelessness,” she’ll get a promotion to President and an upgraded security clearance.

Bottom line: It’s not a proud day to be an American. Many honest people on both sides of the aisle are sad and angry. But with the system hijacked, we are all bystanders to the slow-motion implosion of the United States of America.

What can we expect from the Clintons now that they know they’re completely unconstrained by law and loaded up with a $153 million dollar “speaking fee” fortune?

At the very least more of the same when they last occupied the White House. And that could mean having to teach the kids about Bill’s new definition of sex.

Nothing will surprise me, for it will be party time again at 1600 Pennsylvania Avenue.

And the White House will be open again for serious “get the Clintons richer” business too. But no small-scale renting of the Lincoln Bedroom like last time.

Through their “foundation,” the Clintons have gone global with their “pimp out the country” prostitution. They’ve perfected pay-for-play influence-peddling on such an epic scale that “House of Cards” scriptwriters must be seething with jealousy that the Clinton script is better than their fiction.

Let me be blunt: This means the power and prestige of the United States of America is for sale for the right price to Third World dictators.

I say, “Who’s going to stop them from getting paid?”

Look, yesterday, the Director of the United States Federal Bureau of Investigation said, “there is evidence of potential violations of the statutes regarding the handling of classified information.”

Do you really think it’s “possible” with the full force of the FBI investigating that they couldn’t figure out exactly whether or not a foreign hostile actor gained access to her server?

Comey knows. You know he knows. He knows he knows.

But the game is rigged.

Sadly, none of this will change until there is an implosion.

I can’t tell you exactly when or how that cleansing unfolds, but we all know the behavior personified by two grifters from Arkansas can’t win out in the long run if our country is to survive.

Please send me your comments to coveluncensored@agorafinancial.com. I want to know what you think of today’s article.