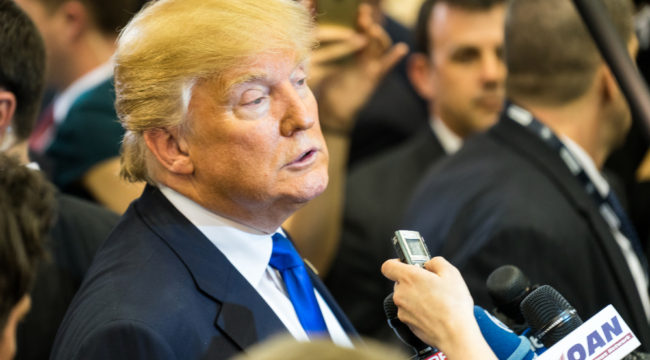 Here’s When the Trump Market Rally Will End…

The market’s been on a three-week upward tear since Trump’s election despite countless market “experts” who predicted a market collapse should he win.

And now those same geniuses are predicting an impending decline.

Here’s how to know if they’re right this time…

Odds are in favor of an interest rate hike at the Federal Reserve meeting in mid-December.

Analysts’ conventional wisdom says the market will crater like it did after the last rate hike in December 2015.

lowering their forward earnings guidance for 2017. Accepted wisdom says that bodes ill for stock prices in the near future.

Then there are valuations…

Mark Hulbert of Marketwatch reports: “Depending on which of six widely used valuation measures, the market currently is more overvalued than it was, at between 79% and 95% of the three dozen bull-market tops since 1900.”

What goes up must come down “they” say.

There’s also the threat of recession…

According to the National Bureau of Economic Research, the average post-World War II expansion cycle lasts less than five years. We’re now on 7 years without an official recession.

The bottom line is we’re overdue for the next rip-roaring downturn, the first signs of which should be a rally killer.

The chattering clowns spread across financial media tell us that all of these fundamental red flags point to impending stock market danger.

You get it: Be afraid, deathly afraid.

Don’t risk a penny on this predictive foolishness.

The herd tells you that the stock market will decline when rates go up. And it might in the short run… or it might not.

Studies show the S&P generally earns between 8% and 10% annually when interest rates are moving higher.

Or maybe you’re going to bet on a market decline because valuations are too high?

You’re told the market is “overbought” and has run out of steam, even though no one seems to know what the hell “overbought” means.

But let’s stay practical. Have a look at the chart below. It shows three large rallies over the past year. The red arrows highlight when the S&P 500 first became overbought. 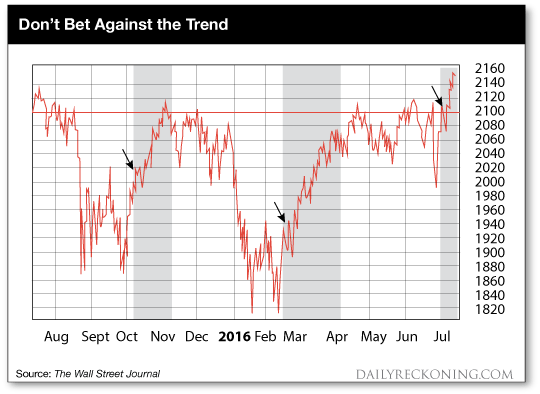 As you can see, the majority of the gains took place after entering overbought territory. This signals a market that’s still in an uptrend. If you followed conventional fear mongering advice and bet against it, you got burned.

Let me be blunt: You should never fight the price trend… especially not when based on “expert” analysis of what “should” happen – no matter how much your lizard brain thinks it makes sense.

Sure, any of these warning signs can kill the Trump rally… or not. It’s impossible to know what’s going to happen next.

But trying to outguess what the market price is actually doing will kill your account.

Bottom line: Ignore “expert” warnings like the plague. If you follow the trend you will know when the Trump rally is officially done.