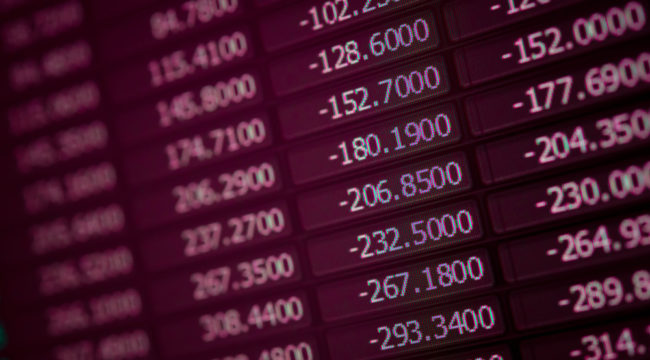 Here’s Where the Next Great Crisis Originates

All financial crises are the same and different at the same time.

They are the same when it comes to the dynamics of contagion, illiquidity, bank failures and the high-panic state in which everyone in the world wants his money back at the same time.

Yet each crisis is different in its specific causes.

The 1994 Tequila Crisis was caused by Mexico’s inability to roll over short-term unsecured debts. The 1998 Russia-LTCM crisis started in 1997 with Thailand devaluing its currency. That panic spread around the world through Indonesia, South Korea, Malaysia and Russia before finally landing in Greenwich, Connecticut, home of Long-Term Capital Management.

Wall Street, and Lehman Brothers in particular, would have been the next victims if LTCM had not been rescued by the same banks with the most to lose. Of course, the 2008 panic had its roots in subprime mortgages, but quickly spread to debt obligations of all kinds, especially money market funds and European bank commercial paper.

But what about the next crisis?

According to one recent Bloomberg article, the next crisis will begin in the private bank debt market.

The specific culprit is a kind of debt called “contingent convertible” debt, or “CoCos.” These bonds start out like ordinary debt, but a bank in distress could convert them to equity to improve its capital ratios.

The problem is that bondholders know this and start dumping the bonds before the bank can pull the trigger on the conversion clause. This can cause a run on the bank and trigger cross default clauses in other bonds. Far from adding safety to bank capital structures, CoCos can make banks more unstable by igniting panics.

This is just one more example of capital market complexity, and it signals the fact that the next crisis will be worse than the last.

The bottom line is that today, systemic risk is more dangerous than ever. Each crisis is bigger than the one before. Too-big-to-fail banks are bigger than ever, have a larger percentage of the total assets of the banking system and have much larger derivatives books.

New automated trading algorithms like high-frequency trading techniques used in stock markets could add to liquidity in normal times, but the liquidity could disappear instantly in times of market stress. And when the catalyst is triggered and panic commences, impersonal dynamics take on a life of their own.

These kinds of sudden, unexpected crashes that seem to emerge from nowhere are entirely consistent with the predictions of complexity theory.

The ability of central banks to deal with a new crisis is highly constrained by low interest rates and bloated balance sheets, which despite some movement in that direction still have not been normalized since the last crisis.

For now, it’s not clear which way things will break next. Markets are still in a precarious position and volatility is high. Regardless of which direction markets go from here, we cannot escape the risks hidden linkages pose to modern capital markets.

We’ve already had a correction this year. But the next correction could turn into a 30% or 40% crash.

I recommend you reduce your exposure to the stock market and move into cash, gold, Treasuries, land and fine art.

You might possibly miss out on some stock market gains, but you won’t have to worry about losing everything when the crash comes.