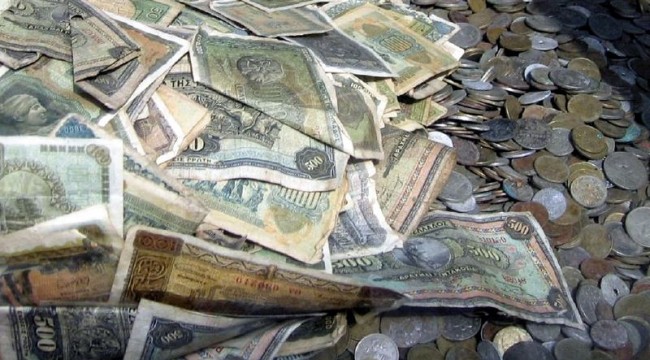 Greece's New Money Could Be Many, Not One...

It was easy to predict the eventual collapse of the one-currency-fits-all euro: indeed, many analysts explained why it was doomed before it was adopted as an integral part of the European Project, which broadly speaking calls for complete integration of the European economies.

I covered the many structural deficiencies in the euro five years ago:

When Debt-Junkies Go Broke, So Do Mercantilist Pushers (March 1, 2010)

The hard part is guessing what’s next. It seems one dynamic of “what’s next” is multiple currencies being used in Greece rather than one single currency: many, not one. As the U.K.’s Telegraph reports, companies are issuing private currencies to fill the void.

Despite assurances, the crisis is likely to escalate fast if there is no resolution early next week. Businesses in Thessaloniki and other parts of the country are already creating parallel private currencies to keep trade alive and alleviate an acute shortage of liquidity. Vasilis Papadopoulos, owner of the Maxi paper mill in Katerini, said the situation was becoming desperate for his industry.

“I have enough raw materials to last until July 14. If I don’t get any more pulp, I will have to close the factory. It is a simple as that. I have 183 employees and I will have to start laying them off,” he said.

His firm has reached an accord with regional supermarkets to accept coupons or private scrip money in lieu of payment as soon as next week. His workers will then be able to use this paper as a parallel currency at the supermarket to buy goods.

The idea that scrips, IOUs, letters of credit or indeed, notched sticks, can act as perfectly legitimate money is not surprising to anyone who has read David Graber’s marvelous history of credit and money, Debt: The First 5,000 Years or Fernand Braudel’s three-volume history of modern Capitalism:

The Structures of Everyday Life (Volume 1)

The Wheels of Commerce (Volume 2)

The Perspective of the World (Volume 3)

When exchange-money is in short supply, i.e. a liquidity crisis, various forms of currency arise to fill the need to grease commerce. Money has two basic purposes: to grease trade/commerce, and as a store of value.

Accounts of people in Greece buying crypto-currencies such as bitcoin strongly suggest that multiple currencies will serve as exchange-money. In its cash form, the euro will of course still be money, but there may not be enough of it in physical form to enable trade.

As I have often pointed out, the U.S. dollar acts as money virtually everywhere–especially when the local currency is depreciating or there is a liquidity crunch.

Gold and silver, traditional stores of value, can also act as exchange-money, though the principle that bad money drives out good money (Gresham’s law) holds that people will hoard gold and silver and use scrip, paper currencies etc. for exchange purposes.

What we may be witnessing is the first phase of a new era of widespread non-state currencies, that is, currencies issued by private parties rather than nation-states or central banks. These could be crytpo-digital currencies, gold-backed currencies or any number of other variations.

Nation-states and central banks are anxious to maintain their monopoly on money issuance, of course, because the power to issue money is (along with forced conscription and making war) the ultimate foundation of state power.

As correspondent Mark G. observes, the evolution of multiple forms of money speeds up in times of rapid transition:

Companies issuing private label currencies is probably not as one-off exceptional as people will tend to assume.

I personally have been anticipating that further evolution towards a more “Hanseatic” style economy will include the emergence of multiple exchange systems operating concurrently in parallel. These exchange systems will naturally develop faster during times of turmoil than when everything is quiet.

Breaking the grip of central-state/bank issued money will be a major evolutionary step forward for the global economy. Breaking free of the state’s power to depreciate our money at will is a major advance in human liberty and economic security.