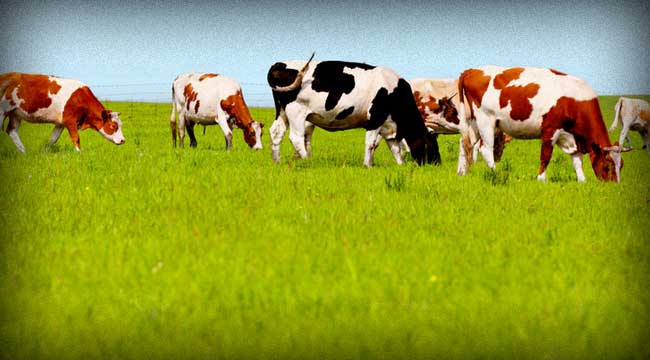 Woo-hoo! It is a wonderful thing when the good guys win one for a change. Well, it wasn’t a total win, but it gives hope.

In a case brought by the Wisconsin state government — with full cooperation from the federal government — a jury refused to convict Amish farmer Vernon Hershberger on all counts for distributing milk, cheese, and meat without a license. He did he end up with one conviction, for which he faces a year in jail, but that’s nothing compared with what might have happened.

Now, there are still many people who would read the above and say: Wait just a minute here. You mean to tell me that a farmer was hounded by bureaucrats for selling his own food to others who wanted to buy it?

Indeed. His farm was raided in 2010, and much of his milk and cheese was destroyed by the police. The conviction was based on Vernon’s desire to fulfill his commitments and distribute what remained.

The case is strange because everyone knows that the raid, the trial, and everything surrounding this case is related to raw milk and cheese. It has huge fans all over the country, people who claim that it is healthier than pasteurized milk and cheese. It is legal in 30 states to produce, buy, and sell. In Europe, no one thinks anything about it.

These raw products have fans all over the country. Even in my own community, there are devotees who swear by it and have to engage in all sorts of absurd twists and turns just to get it, and then pass it around like contraband.

Why is this? The U.S. has this extremely powerful dairy lobby. They use government regulations to maintain their monopoly control over production and distribution. That means excluding small startups like family farms, especially those that can cater to niche interests. The milk lobby will have none of it and cracks down wherever possible.

There’s nothing wrong with big business and nothing criminal about pasteurization itself. To each his own and all that. For my own part, I’m happy to buy my milk at the regular store. The problem comes when government is there to be used by industry as a cartelization device to boost and sustain market standing. The industry can go on all day about the health fears of raw products, but the real motivation is rather obvious.

What Hershberger was technically charged with was operating without all the proper licenses. The judge actually banned any discussion of the merits or nonmerits of his products. The jurors were told that their only job was to decide if this one farmer filled out all the right paperwork and paid all the correct fees you have to pay to sell stuff.

But wait a minute. Could he receive those licenses? Of course not, because he was not willing to comply with the regulations. In fact, had he complied, he would have lost all of his customers, who themselves were not just regular customers. They were part-owners of the farm itself — a strategy that many small farmers use to get around these crazy restrictions.

The jurors were actually behaving quite courageously in thinking for themselves. They must have looked at this good farmer in Wisconsin and wondered why he was even on trial at all. He was only doing what farmers have done since ancient times: producing food for people to eat. His client base was ridiculously small. We are talking about a few dozen people here, and a net income for Vernon that in 2010 was only $45,000.

Why was the government wasting its time on such nonsense as prosecuting small farmers for selling stuff? That’s a really good question. The answer is that this is what government does these days. Its main agenda is to stop people from getting together and exchanging things to their mutual benefit.

When you look at the problem this way, you can see that this is not a left-versus-right issue. It affects absolutely everyone, whether we are talking about raw milk or marijuana or medications or home appliances. The government’s got its hand in everything.

The main result of such an impulse is not to improve the world we live in. It is to prevent people from doing things that they believe amount to improvements of their own lives.

There is a special disgrace that comes with putting a milk and cheese farmer on trial in Wisconsin, of all places. This is the land that was built by exactly the sort of thing that Vernon was doing. That such activities are illegal and the people doing them are harassed for years and then put on trial is a stunning affront to freedom itself.

To regulate and ban anything ends up relegating perfectly legitimate activities to the sector of the criminal underground, a sector growing ever larger by the day. It operates like a parallel system to the legal one.

In the criminal underground, there exists the “darknet.” This free visible dark side of the Internet is easily browsable from your home computer provided you use the right tools. If you do happen to find yourself there, you’ll find the full range of human activity, from the upright and virtuous (making cheese and selling it) to the despicable and disgusting (assassination services) and everything in between.

The more laws we have, the more people are thrown into this sector, and all are clumped into this one category called criminal. This tendency really does begin to blur what is and isn’t wrong — as if morality has nothing to do with it and the only issue is what’s legal or illegal.

This thought occurred to me when on the same day that this farmer was acquitted, the U.S. government announced the shutting down of a money service in Latin America that prosecutors said had laundered some $6 billion in criminal money. But in all the news stories, there isn’t a word about prosecutions of actual criminals for whom the money was being laundered. It’s like they didn’t matter. Only the guys with the spreadsheets and websites got hit, even though they were only providing peaceful financial services.

Government can make all the criminals it wants. It can manufacture them the way McDonald’s makes hamburgers. All that needs to happen is to pass more laws and enforce them. Higher taxes, regulations, immigration controls, exchange controls, price controls — these end only in bolstering the sector that chooses to operate outside the law. The Breaking Bad segment, as they say in today’s parlance.

This will be one result of Obamacare, for example. It will fuel the expansion and sophistication of the informal sector of service and goods delivery within the health care sector. You think you don’t need it and won’t use it, but the time will come when it becomes a matter of life and death.

Already, some physicians are bailing out of the entire system — operating solely on fee for service and not accepting any insurance or government assistance at all. This probably cuts in on the bottom line, but it it allows them to avoid all the red tape, legal liability, and uncertainty of dealing with the coming regulatory onslaught.

I’m glad to see this, because there will come a time when we might end up depending on this new sector. In fact, every country with socialized medicine has these purely private solutions, mostly available only to the elite and those in the know.

It didn’t have to be this way, but this is the way things are going. And the reason is this: Government regulations and prohibitions never, ever work to achieve their stated ends. They only raise the costs of doing business. Some companies and individuals comply, and some do not, but the overall situation never improves because of the regulations themselves. Instead, the commercial sector just becomes stratified, and so does the society it serves.

Who is to blame for this sad situation? The government that creates it or the business people who find ingenious ways around the regime?

At least one jury in Wisconsin seems to have understood.