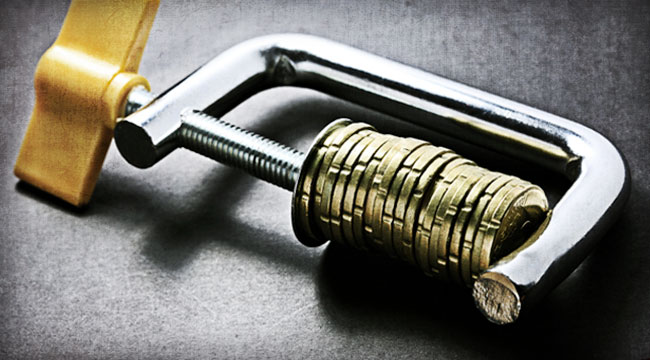 Whether it’s by coincidence or not, we don’t know, but gold has been very quiet ever since Deutsche Bank dumped its seat on the London gold fixing panel in late April.

For some time before that regulators were sniffing around the London gold ‘fix’…and something didn’t smell quite right.

The London gold fix is a process by which five investment banks set (errr…fix) the price of gold on a twice daily basis in London. It’s been going on like that since 1919 when NM Rothschild controlled the process.

But in January, Deutsche Bank announced that it would relinquish its gold fixing seat (under pressure from the German financial regulator). It hoped to sell its seat to another player, but curiously no one was interested. As a result, it resigned the seat in late April, giving two weeks’ notice.

At the same time, Deutsche resigned from the silver fix. Because the daily silver fix only had three participants, this move effectively killed the price setting process. The silver fix, which began in 1897, will cease in August this year.

So here we have a major player getting out of a supposedly venerable position very quickly. Then, just a few weeks later, the UK’s Financial Services Authority (FSA) fines Barclays Bank £26 million for manipulating the gold fixing process. Of course this was just an isolated incident, and the FSA also fined a Barclays ‘rogue trader’ £96,000 pounds for doing the manipulating. It’s not as if it’s systemic or anything…

Maybe that’s why the gold price has been remarkably quiet these past few weeks. The fixers know the regulators are watching. Everyone’s behaving. But it’s not going to stay like that for long.

The fining of Barclay’s… highlights what a degenerate racket the whole financial system has become.

The fining of Barclay’s for manipulating the gold fix highlights what a degenerate racket the whole financial system has become. It’s a great business model for banks and governments. Here’s how it works:

Governments and central banks ensure a constant policy of inflationism and easy money…money that flows to the large banks before it gets to anyone else in the economy. This torrent of cash is sure to corrupt the most upstanding citizen, because when it comes to money, you can always have more, right?

It goes without saying then that in such a system, you’re going to have errors of judgment, oversight, and outright deception and corruption. But do the regulators actually try to stop it?

No, they just impose fines to get their cut too. Fines don’t discourage bad behaviour; they are just a cost of doing business.

According to analysis by the Financial Times, global investment banks have paid $100 billion in US legal settlements since the financial crisis in 2008. Yet no senior executives of any bank have had criminal charges laid against them.

Our high school economics teacher once said: ‘Boys, if you’re thinking of going into the crime business, stick to the white collar stuff. They go easy on you.’ He was spot on…more so than he would’ve thought at the time.

Take a look at Barclays’ track record. The recent fine for gold fixing related to a period back in 2012, which came just days after the bank copped a record fine for manipulating the ‘Libor’ interest rate. Now, senior executives are under a probe by the UK’s Serious Fraud Office for dodgy dealings in Qatar during 2008. How’s the ‘culture’ at Barclays!

Don’t expect any of this to stop. It’s what happens in the latter stages of degenerate capitalism. Critics are quick to point out that capitalism is the problem. It’s not.

The chief problem is the constant manipulation of the rate of interest. By holding rates for a prolonged period below the ‘natural rate’ (the free market rate where the needs of savers and investors are balanced out) you create distortions on such a grand scale there is practically no fix apart from a system bust up.

In the meantime, bankers behaving badly, and regulators taxing this behaviour (but not discouraging it) will continue. It will lead to greater resentment and class warfare. The likes of Thomas Piketty and his Marxist schemes of wealth re-distribution will gain traction, and real wealth will diminish further as the genuine producers are taxed out of existence.

Getting back to the gold fix, you could well be seeing the beginning of an end of an era in London. The Financial Review reports today that:

‘China has approached foreign banks and gold producers to participate in a global gold exchange in Shanghai, people familiar with the matter said, as the world’s top producer and importer of the metal seeks greater influence over pricing.

The Shanghai Gold Exchange (SGE) got the go ahead from the central bank last week to launch a global trading platform in the city’s pilot free trade zone, a move that could challenge the dominance of New York and London in gold trade and pricing.’

That’s a big call, and it will take some time. But if China can demonstrate a more transparent pricing process than London, it’s on its way to usurping it as a major gold trading hub. The other major challenge for China is protecting private property rights.

Large holders of gold (think the Saudis) are happy leaving their gold in London because the UK is secure (it’s an island and difficult to invade) and they know authorities won’t confiscate their gold. It has a long history of protecting private property.

Would the Saudis feel as safe leaving their gold on the Chinese mainland? Not right now. But China can chip away at the UK’s competitive advantage by enacting property rights laws and upholding them in all circumstances.

At the very least, China wants to develop an Asian trading hub for the precious metal as well as other commodities that it’s a large consumer of. Wresting part of that role from London should improve pricing transparency and business. When it comes to trading hubs, liquidity begets liquidity and it could soon dominate the market, leaving London to become a deep storage unit for gold…not a very lucrative business.

Ed. Note: In today’s email edition of the Daily Reckoning — a completely FREE publication — there were many other insights on the horribly corrupted state of the financial industry besides this essay. However, that material is only available to subscribers of the email edition. In fact, by not subscribing, you actually miss out on 50% of all the material we publish each day. But there’s good news… You can sign up right now, for FREE, by clicking here. Don’t miss another issue or any of the incredible, potentially fortune building analysis you’ll only get with the Daily Reckoning email edition. Sign up for FREE, right here.