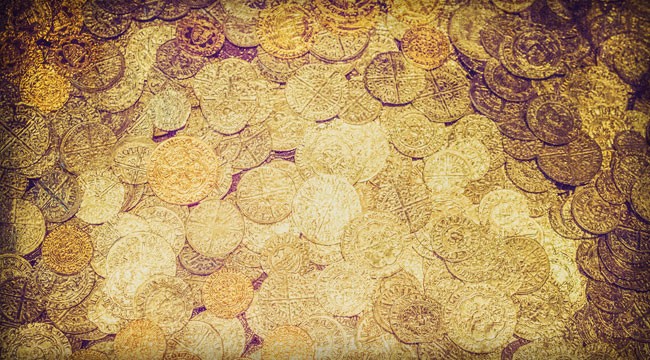 Gold is (Once Again) Money

“I only know of two men who really understand the true value of gold — an obscure clerk in the basement vault of the Banque de Paris and one of the directors of the Bank of England. Unfortunately, they disagree.”

“Money is gold, and nothing else.”

“Nobody really understands gold prices, and I don’t pretend to understand them either.”

These quotes illustrate the perennial challenge that investors face in deciding what role gold should play in their portfolios. Few understand how to value gold, and even fewer understand that gold is not really an investment — it is money. Of course, if you want a portfolio that preserves wealth, money is a good place to start.

Saying gold is not an investment may seem strange, especially since I recommend some gold in an investor’s portfolio. To illustrate this point, you can reach into your purse or wallet and pull out a dollar bill. You think of the dollar as “money,” but you do not think of it as an investment.

An investment has some element of risk, and typically has some yield in the form of interest, dividends or rent. Money can be turned into an investment by using it to buy stocks, bonds or real estate. But as a dollar bill, it is just money; it has no yield and will still be a dollar tomorrow or next year.

While gold is money, this fact is frequently ignored by investors. Gold often trades like an investment and is said to be “up” or “down” in dollar value, the same as a stock is said to be going up or down. Gold also trades like a commodity; in fact, the primary trading venue for paper contracts in gold is the Commodity Exchange, or COMEX.

That’s why the chart below is so fascinating. It compares the price of gold with the Continuous Commodity Index, an index of major commodities that has been maintained consistently since 1957. The index includes gold, copper, cotton, crude oil, natural gas and 12 other widely traded commodities.

Throughout 2014, the gold price closely tracked the commodity index, as might be expected. The price trend of both was downward, which reflected the strong deflationary trends that began to prevail last year. But in November, this correlation broke down and gold began to diverge sharply from the overall index. 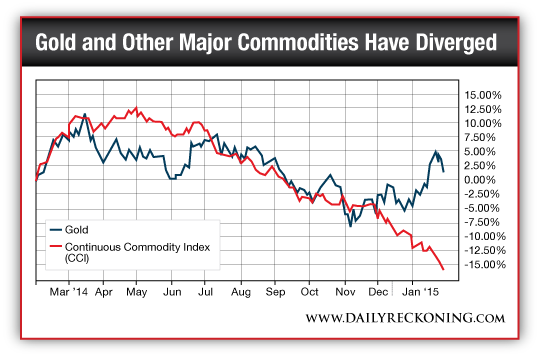 That was not the only significant development in gold late last year. As this chart shows, the pace of gold shipments out of the Federal Reserve Bank of New York increased sharply in October and November. Over 90 tons of gold were shipped out of the Fed to their rightful owners abroad in those two months alone.

That was more than half the total amount of gold shipped out for the entire year. Bear in mind that prior to 2012, almost no gold had been shipped from the Federal Reserve Bank of New York since the 1970s. 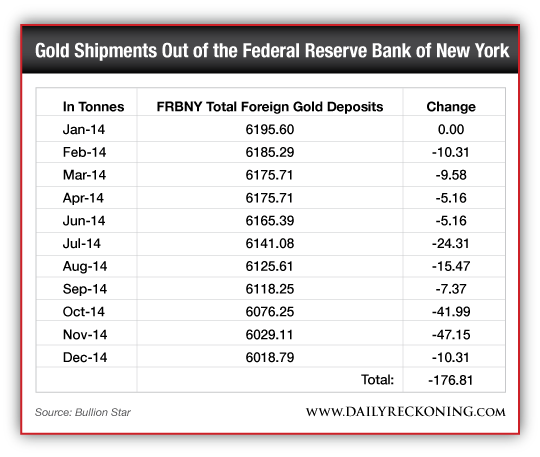 It’s a mistake to read too much into short-time series of data such as the gold/CCI correlation or the gold shipments from the Fed. Every analyst knows that correlation of factors does not prove causation. But these two charts do suggest that suddenly late last year, gold stopped trading like an investment or a commodity and started behaving like what it has always been — money.

Late 2014 was a period when commodities generally declined because of deflation and currencies generally fell against the dollar as part of the currency wars. The declining currencies were also a symptom of deflation because currency devaluation is a way to import inflation from trading partners in order to stave off domestic deflation.

Only three major assets went up strongly in the past six months: U.S. dollars, Swiss francs and gold.

The dollar/gold correlation was most striking because they had been inversely correlated since 2011 with the dollar getting stronger and gold getting weaker. Suddenly, gold and dollars were gaining strength together against commodities, euros, yen, yuan and most other measures of wealth.

Using our causal inference models, our tentative conclusion is that gold is behaving like money again. This could be an early warning of a breakdown in the international monetary system as a result of persistent deflation and currency wars. Investors are moving to safe havens, and dollars, gold and Swiss francs are at the top of the list.

However, our intelligence collections and inferential models suggest that something even more profound may be going on. Russian and Chinese gold acquisition programs have been going on for years; that story is well known to our readers. But those acquisitions have now passed the point that Russia and China need to have a seat at the table in any new international monetary conference.

Both countries have caught up to the U.S. in terms of the all-important gold-to-GDP ratio. Yet massive gold acquisitions by Russia and China continue. Can something else be going on?

For China, the hedge is simple. If the U.S. inflates the value of the dollar, China will lose on its debt holdings but will make large gains on its gold. Converting some portion of its dollar reserves to gold is a good way for China to hedge its exposure to dollars.

For Russia, the case is more convoluted. In the short run, Saudi Arabia is suppressing the dollar value of oil, which hurts Russian receipts, since Russian oil is also priced in U.S. dollars. But this deflation has also tended to keep gold prices low in recent years.

When Russia sells oil at a low dollar price, it immediately converts the dollars to gold, also at a relatively low dollar price. When inflation returns, the dollar price of Russia’s gold will soar, thereby compensating it for the “lost dollars” or the earlier sales of oil.

What China and Russia have in common is they are both protecting themselves against dollar and oil price manipulation by converting their export sales into gold. While investors may have missed this development, other central banks have not.

The withdrawals from the Federal Reserve represent efforts by central banks in Germany, Netherlands and elsewhere to take physical possession of their gold in advance of a systemic monetary breakdown.

The correlation of dollars and gold, the divergence of gold from commodities, the repatriation of gold from the Fed and continued large acquisitions of gold by China and Russia are all visible from the data.

The conclusions that gold is beginning to behave like money rather than a commodity and that Russia and China are using gold to hedge dollar exposures in oil and Treasury securities respectively are reasonable inferences using our models.

But is something else going on? Something that is not apparent in the data and for which the inference would be less certain? Could Russia and China be trying to corner the market in gold?

Leaving aside blatant government intervention such as FDR’s 1933 gold confiscation, there has not been a successful effort to corner the gold market since Jay Gould and “Big Jim” Fisk tried it in 1869. Even that corner was broken when the U.S. Treasury unexpectedly sold large quantities of gold after Fisk and Gould had been assured by insiders that the Treasury would not do so.

The Hunt brothers infamously tried to corner the silver market in 1979 and 1980. That corner was broken by a combination of scrap silver flooding the market in the form of tea sets and silverware and changes in exchange regulations that increased margin requirements and hurt the Hunts’ ability to maintain their leveraged futures positions.

A Russian corner of the gold market would not be leveraged on futures exchanges, because Russia is a cash buyer of physical gold. Russia is also immune from U.S. regulation; the U.S. has no enforcement powers in Russia.

As in the cases of Gould, Fisk and the Hunt brothers, patience and stealth are needed at the beginning of a successful corner. Russia has both.

We will watch this story closely in the future and use our causal inference and inverse probability models to test the thesis. As signs emerge of a possible corner of the gold market by Russia, our readers will be among the first to know.

In the meantime, investors who have not already allocated some portion of their portfolio to gold still have time to make the allocation at an attractive entry point.