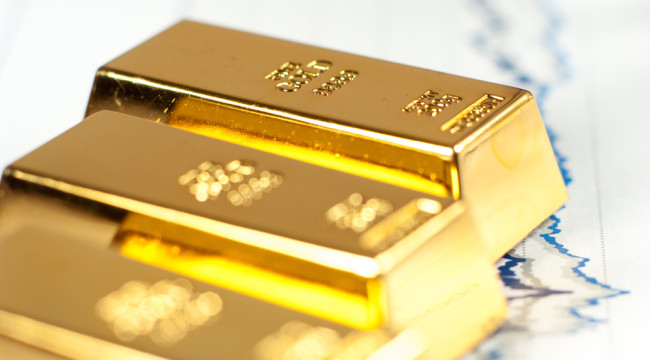 “It makes a great deal of sense to own gold. Other investors may be finally starting to agree. Investors have increasingly started processing the fact that the world’s central bankers are completely focused on debasing their currencies.”

“[Gold’s] traded for 5,000 years and for the first time has a positive carry in many parts of the globe as bankers are now experimenting with the absurd notion of negative interest rates,” he said. He added, “Some regard it as a metal, we regard it as a currency, and it remains our largest currency allocation,”

These fellows must be reading Jim Rickards.

“Money managers boosted their net long positions to the highest since 2011, when gold prices surged to a record,” reported Bloomberg yesterday.

Meanwhile, the World Gold Council — and yes, such a thing exists — reports today that global investment demand is up 122% since this time last year.

Returning to Greg, it’s worth noting that he’s neutral on gold. He’ll dump it quick as a wink if he thinks it’s going down. Greg caught holy hell from some of his readers back in 2013 for advising them to get out of gold. One of them — apparently one with a sizable gold position — went so far as to call him the “Antichrist.”

Turns out the Antichrist was right. The bottom proceeded to fall out on gold, which only found its footing earlier this year.

“I know we’re dealing with what feels like a record amount of insanity in the markets these days. But the charts don’t lie. Gold and precious metals miners have broken free of a bear market that has held these stocks back for years… I foresee many new opportunities to trade gold’s comeback move in the coming weeks and months.”

And the charts are telling him to buy gold and select gold miners right now: 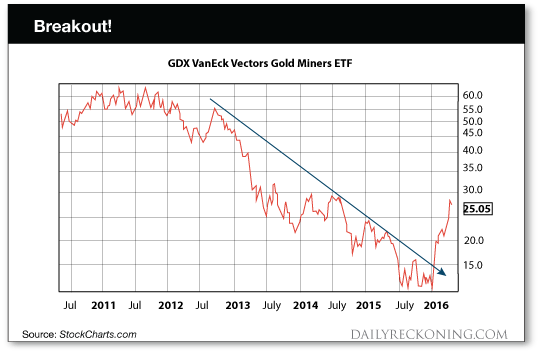 “If you traveled back in time to December and told the average investor that gold would be the best-performing asset of 2016, they would have laughed in your face. And gold certainly wouldn’t have earned a spot in the finance section of any major newspaper,” adds Greg.

But they say it’s darkest just before the dawn. And a golden dawn has broken.

In his article, “trend trader” Michael Covel shows you why he’s all-in on gold stocks right now. Like Greg, he’s agnostic on gold. But his own charts are showing a major bull market is gathering steam. Read on…

P.S. The Federal Reserve might reduce rates again or launch another round of QE to stimulate the failing economy. And gold should soar on the weaker dollar. That’s why we’ve produced a FREE special report called The 5 Best Ways to Own Gold. We’ll send it to you when you sign up for the free daily email edition of The Daily Reckoning. We break down the complex worlds of finance, politics and culture to bring you cutting-edge analysis of the day’s most important events. Click here now to sign up for FREE and claim your special report.