It’s Time to Get Back into Gold Stocks

Göran H., a reader from Sweden, recently sent me a note asking the following…

“When did your system trigger a sell signal on gold stocks? And have you been close of getting a buy signal since 2011?”

But before I answer, I want to warn you…

If you’re a gold bug who thinks gold can only go up… well, I think you won’t be too happy with what I have to say. But I tell it like it is. So let me start by telling you a little story…

At the time, they were running commercials on TV and radio nonstop, telling people they should buy gold coins – often marked up by a huge margin over the actual price of gold (they ended up in a government investigation and settlement).

So when I started talking to one of their salesmen on the phone, I asked the simple and straightforward question: “If I buy gold, when do I ever sell it?”

Their answer was pure comedy. “Gold has never crashed,” the salesperson said. “If gold was to go again from $800 to $200 you would have plenty of warning to sell.”

I wonder if they called all their customers when gold started to crater in 2011. Please, don’t get me wrong.

I’m all for buying physical gold as a way to diversify a portfolio and hedge against a possible collapse of our monetary system.

In fact, I recently had a call with my friend and legendary investor Jim Rogers. He told me he thinks that collapse is very possible. And as a Daily Reckoning reader, you probably know Jim Rickards has a similar thesis.

In many ways, buying and holding gold bars and coins might make perfect sense. It’s very hard to trust currencies. And central banks can be damaging to say the least.

But holding physical gold as a wealth protection strategy is one thing. Speculating in gold ETFs and gold stocks is something completely different.

If you want to make money from trading gold and gold stocks, it makes no sense to “buy and hold.”

In fact, buying and holding commodity investments may be one of the quickest ways to lose a fortune.

The Dumbest Strategy Ever?

Commodities are famous for their boom-and-bust cycles. It’s really hard to make money if you’re simply buying and holding, instead of trading.

Look what happened with gold stocks after 2011.

In 2011, when gold was trading at an all-time high, I warned many of my clients that just buying gold ETFs with no exit plan in place was a recipe for disaster.

I told my readers, “Is there a lot of swimming naked in gold markets today? You bet.” Instead of following the trend, most people just used the “buy and hope” strategy.

They bought and hoped gold stocks would continue to move higher — with no exit strategy. And that’s why most people lost a lot of money. Something similar happened with silver.

For the following two years, silver kept moving higher. A lot of investors thought the sky was the limit for silver — and that it had to go up.

At the time, one market commentator said, “Folks, silver is going to go to $400.” And CNBC featured a money manager saying, “Silver could peak at $620 per ounce.”

But in 2011, while everyone was dreaming about making a fortune in silver, the trend suddenly changed.

Most people, however, didn’t have a strategy to sell when the trend turned.

People like Donna B., a 55-year-old retiree in Florida. She was so certain that silver would rise that she put 60% of her net worth in it.

When silver started moving lower in 2011, she said…

“I don’t believe the correction will last long. Silver will hit $100 before the end of this year. I have never felt so sure in my life about something.”

Another investor who lost money in silver said, “I don’t understand. Silver is supposed to do very well this year.”

Here’s the cold hard truth: the market doesn’t care about what you, I, or any financial talking head “expert” thinks.

When it moves in one direction, you either get on board on the right side of the trend or you get killed. Guaranteed. That’s life.

Is It Time to Jump Back In?

That brings me to the question asked by Göran, one of my readers from Sweden. He wants to know how my proprietary system acted in 2011, and what’s it saying today about gold stocks.

Let’s take a look at the chart of GDX, the most popular gold miners ETF. To answer Göran’s question, my system triggered a sell signal in late 2011. 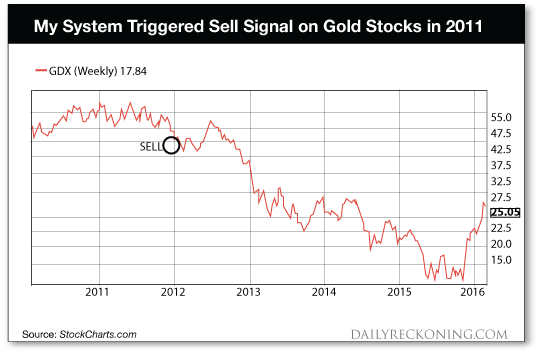 A few weeks ago, one of my readers asked me if it was time to jump back into gold and gold stocks.

To me, that’s all useless information. Instead, my answer was based on the only piece of information you’ll ever need in order to make money…

I’m talking about the price action. Two weeks ago, my system had not triggered a buy signal. But now we have a different story…

My system has just triggered a buy signal on both gold and gold stocks.

Why are gold and gold stocks finally rallying? Is it because China and Russia are buying massive amounts of gold? Is it because physical gold supplies are drying up? Or because investors are losing confidence in central banks?

Maybe all of these are true. But I don’t know why exactly. And frankly, I couldn’t care less.

All I know is that, based on the recent price action, this could be the beginning of a new long-term trend.

Einstein once said, “Everything should be kept as simple as possible, but no simpler.” That’s why trend following wins.

It filters out all the noise of the financial markets and focuses on the only thing that matters: trends.

In fact, you could make money from trend following even if you were on a desert island. All you would need is one piece of information: the price…

After such a big move recently, this could be the beginning of a major bull market in gold.

P.S. The super wealthy have always owned gold to preserve their wealth. But there’s no reason why you shouldn’t also. That’s why we’ve produced a FREE special report called The 5 Best Ways to Own Gold. Don’t buy any gold until you see it. We’ll send you your report when you sign up for the free daily email edition of The Daily Reckoning. Every day you’ll get an independent, penetrating and irreverent perspective on the worlds of finance and politics. And most importantly, how they fit together. Click here now to sign up for FREE and claim your special report.