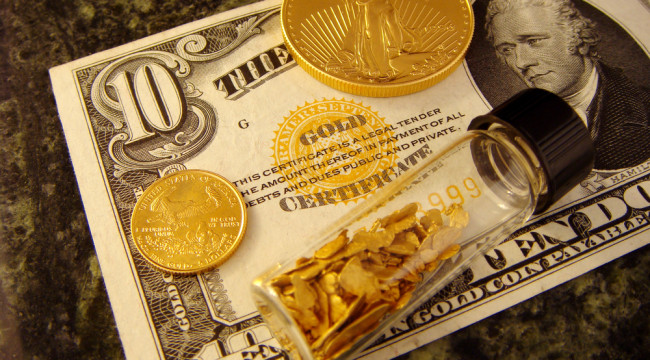 Gold Breaks Out of Short-Term Downtrend

The news that dominated the week was the eleventh-hour decision by the Republican Party to back down from its game of chicken against the President over Obama-care, the budget and the debt ceiling. The debate now continues facilitated by the debt ceiling being temporarily abandoned until February, when presumably the game of chicken will be run for a second time if nothing has been agreed. Understandably gold, along with other markets, was victim to rumour and counter-rumour emanating from Washington with few traders prepared to commit themselves until Thursday morning.

Within this context, the previous Friday (11th Oct.) someone clumsily dumped a big sell order on the futures market ahead of the US opening, which drove the price down $25 to $1262. On Monday this price drop was fully reversed before the market drifted lower again under persistent selling of futures to a low point of $1252 on Tuesday. On Thursday morning, just before 9.00AM UK-time gold suddenly took off, gaining $40 as the US dollar moved sharply lower, in a considered response to the suspension of the debt limit the night before. That sale a week ago, insofar as it has not been closed out is now showing a large trading loss.

This could turn out to be a major turning point, illustrated in the chart below. There is little doubt that the bears, having failed to see selling materialise on the opening mark-down of $4 on Thursday, suddenly realised how exposed they were when the US dollar suddenly weakened. 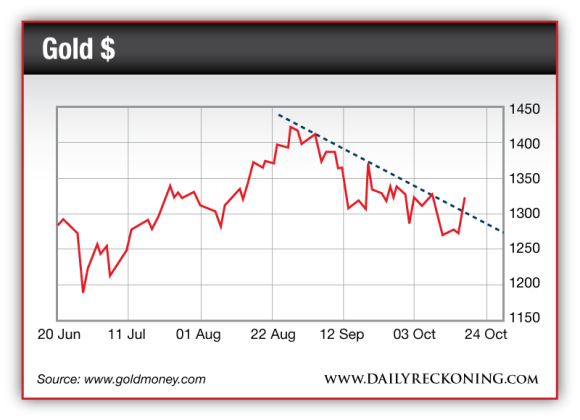 The result is gold has now broken up out of its short-term downtrend (the dotted line). More importantly, the bears failed to push gold down below the June lows under $1200; so gold looks like it has established two rising low-points, confirming that gold is in an uptrend. This being the case, after a brief consolidation gold has the potential to move swiftly higher to challenge the $1350 level and above.

Behind this turn of events is a weaker dollar. There is little doubt that as a brand the US dollar has taken a beating. Not only did the US suffer the indignity of airing its washing in public, not only did a ratings agency threaten to downgrade US Government debt, but also the Chinese through their official news agency Xinhua are calling for an end to dollar and US supremacy. They have backed this up by freezing New York out of the internationalisation of the renminbi, choosing London instead. The full implications of all this have not yet been reflected in financial commentary and will no doubt be debated in the coming weeks.

This is generally bad for the dollar and good for gold.

P.S. If you’re not subscribed to The Daily Reckoning email edition, you’re only getting half the story. Click here to sign up.