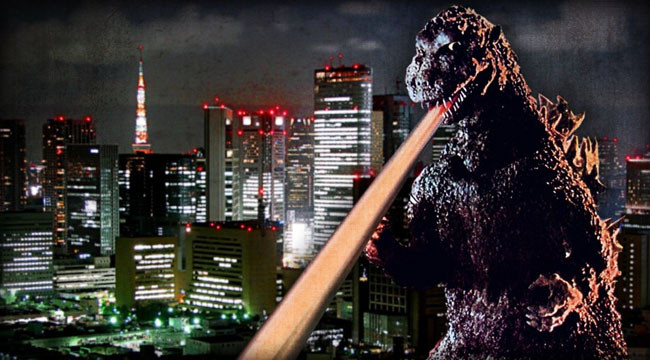 Godzilla Vs. the U.S. Debt Monster

“The villagers came running up the hill to help the boy drive the wolf away. But when they arrived at the top of the hill, they found no wolf. The boy laughed at the sight of their angry faces.

“‘Don’t cry “wolf,” shepherd boy,’ said the villagers, ‘when there’s no wolf!’ They went grumbling back down the hill.”

T-minus six days until the Federal Open Market Committee (FOMC) begins its September meeting. If you’re a skittish trader, we’ll skip to the end of the story: The Sept. 18 release and press conference will bring welcome news. Ben Bernanke will not taper.

[A moment for you to digest…]

Gold took a $10 dive this morning… but regained its footing. As of this writing, the yellow metal is hovering just above $1,368 per ounce. If you’re looking for a “safer” investment, you can earn 2.92% per year this morning in the 10-year Treasury. (Of course, that yield isn’t indexed for the “official” 1.9% inflation. It gets uglier if you use the unofficial 9.62% inflation rate John Williams calculates at ShadowStats.com.)

Stocks pulled back before noon after several days of gains. The Dow is still up, but the S&P 500 and Nasdaq are in the red. Apple shares appear to be taking a drubbing — down 6% so far. The company planned to release a cheaper iPhone, one that emerging market consumers could afford. The latest price tag… $733.

Continuing on, we see emerging markets, which produce nearly half of global output, rising after strong manufacturing data come out of China. Yet the “taper” pall hangs over their heads too.

“It was Fed tightening and a rising dollar that set off Latin America’s crisis in the early 1980s and East Asia’s crisis in the mid-1990s,” writes Ambrose Evans-Pritchard in The Telegraph last month. “Both episodes were contained, though not easily.”

Emerging markets are increasingly borrowing in their own currencies. That gives them a bit more padding against Fed’s impact on the dollar. However, when you account for half the world’s output, your problems become the world’s problems.

The Fed says it will act in the U.S.’ best interest no matter the global impact.

In the meantime, the U.S. government continues to wrestle with its demons. A recent study published by the Bipartisan Policy Center (sic) warns the U.S could default on its debt as soon as Oct. 18, 2013. That doesn’t mean it won’t pay any bills… it just won’t pay some of them. For example, Social Security payments due Nov. 1 could be delayed by two weeks.

Meh. Not like anyone’s counting on those checks anyway…

At some point, in some form, the U.S. will default on its obligations. But not while there’s still recourse to raise the debt limit. Not while politicians’ careers are on the line. And that is the post-Sept. 11 legacy, 12 years on: debt, debasement and Godzilla-sized government.

Today we featured a classique from Daily Reckoning co-founder Bill Bonner, titled The Dark Years.” It was written Sept. 12, 2001, from our office in Paris. The NYSE didn’t open that day. Neither did the Nasdaq.

In fact, they wouldn’t open for another five days for fear of a crash. It was the longest shutdown since 1933. When the markets finally opened again, the NYSE nose-dived 684 points — for a record 7.1% decline.

When the first plane hit, we were sitting in our office overlooking Le Paradis cafe in Paris’ fourth arrondissement on rue de la Verrerie. We were just about finished writing The Daily Reckoning, very much like we’re doing at this very moment. At first, it seemed as if a small private airplane had made a grave navigational error… the ensuing hours would reveal it was much worse.

We continued to scribble away in our Parisian post while the West geared up to invade Afghanistan.

“American battle casualties, including dead and wounded, have mounted to 55,216 since the United States launched a war in Afghanistan 11 years ago,” writes David Wood for the HuffPo. The cost since 2001? $657 billion, according to the National Priorities Project.

Then, of course, came “shock and awe” in Iraq. Reuters’ Daniel Trotta attempts to tabulate that affair: “When security forces, insurgents, journalists and humanitarian workers were included, the war’s death toll has risen to an estimated 176,000-189,000.” He also notes, “The U.S. war in Iraq has cost $1.7 trillion, with an additional $490 billion in benefits owed to war veterans.

Trotta’s calculation will likely prove to be a conservative one. Debt ceiling debate be damned.

“The final cost of the Iraq and Afghanistan wars” writes Jeremy Herb for the Hill, “will be between $4 and $6 trillion — and most of those costs have yet to be paid, according to a new study out of Harvard University.” He’s referring to veterans’ medical bills that will have to be paid in the future. Total U.S. casualties in both wars, according to antiwar.com: 6,755.

“Twelve years after we were attacked by al-Qaida,” Sen. Rand Paul (R-KY) in a YouTube rebuttal to the president’s speech yesterday, “12 years after 3,000 Americans were killed by al-Qaida, President Obama now asks us to be allies with al-Qaida [in Syria].”

P.S. If Jeremy Herb’s estimate for the wars in Iraq and Afghanistan are accurate, the U.S. still has a whole lot of spending to do. And most of that is sure to come straight from your wallet. In any event, you should take steps to safeguard your wealth. That’s why we write The Daily Reckoning. In each issue of The Daily Reckoning email edition, you’ll find opportunities to protect and even grow your wealth, no matter what happens. Signing up is completely free, and only takes about 30 seconds. Take a moment to sign up right here.