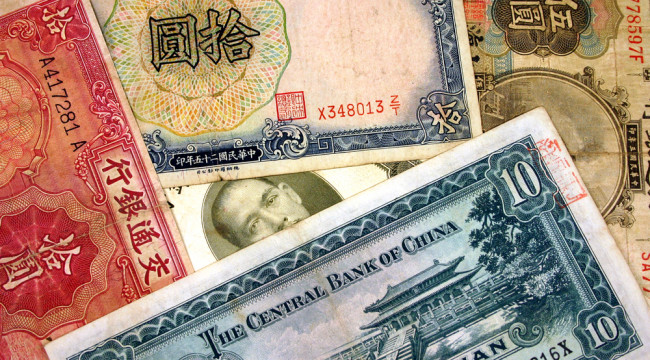 Four Profit Opportunities from the Secret “Shanghai Accord”

Seven weeks on, the “Shanghai Accord” thesis is looking stronger than ever. And it could mean up to 276% gains before year-end. Just for starters.

Back on Feb. 26, finance ministers and central bankers from the “G-20” nations gathered in Shanghai.

The “Shanghai Snoozer” we called it, because it made absolutely no news, despite pleas from the International Monetary Fund for “bold multilateral actions to boost growth and contain risk.”

But a month later, Jim Rickards informed us of a “secret side meeting” involving the United States, Europe, Japan, China — representing more than 70% of the global economy — brokered by the IMF.

With the hindsight of three more weeks, Jim now tells us, “The Shanghai Accord is the most powerful coordinated foreign exchange intervention by major financial powers since March 2011.”

That’s when the G-7 nations stepped in to weaken the yen after the Fukushima earthquake-tsunami-meltdown in Japan.

The trigger for this latest intervention wasn’t a natural disaster that set off a man-made one. “China needed currency devaluation to give its economy a boost,” Jim explains. “The last two times China did this (August 2015 and January 2016), U.S. stock markets tanked. The problem was how to devalue China’s currency without sinking U.S. stocks (and potentially other markets around the world).”

Key to this solution is a basic fact, one that too many Wall Street “experts” and financial bloggers overlook: Currency wars are a zero-sum game.

[They can all devalue against gold, but that’s a story for another day… Heh.]

Jim has an analogy, one we’ve shared before, but it’s a good one to revisit. “Think of the countries in a currency war as four soldiers fighting on a hot day. They’re tired and thirsty and they decide to take a short rest. But they only have one canteen of water to share among the four of them. What do they do? They pass the canteen.

“Each soldier is thirsty and wants to drink the whole canteen. But they’re all in the battle together; they need each other. So each one takes a sip and passes it to the other. Somehow, they all survive.”

“Passing the canteen” has been the story among the globe’s four biggest economies since 2010:

2010: An undervalued Chinese yuan. Recalls Jim: “Remember all of the complaints about ‘currency manipulation’ by the Chinese coming from Treasury Secretary Tim Geithner?”

2014–15 : Europe took its turn, first with negative interest rates and then with its own version of “quantitative easing.” The euro bottomed around $1.05 twice last year.

But how do the powers that be manage to weaken both the yuan and the dollar at the same time?

Jim described the essence of the Shanghai Accord here last month: Weaken the yuan by strengthening the euro and yen. With the yuan loosely pegged to the dollar, the dollar will likewise weaken.

It’s all a theory — again, no one strode before the cameras to make an announcement — but everything that’s happened in the last seven weeks has reinforced the theory. The European Central Bank signaled it was done with easing measures. The Bank of Japan delivered less “quantitative easing” than markets expected. 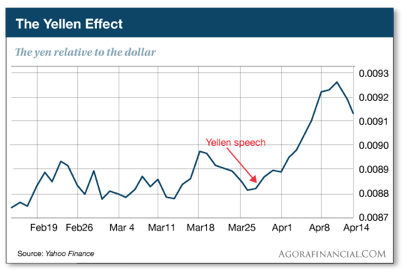 “What’s most significant about this latest twist in the currency wars is that the effect will be long lasting,” Jim concludes.

“The strong dollar episode lasted over four years (2011–15). The weak yen episode played out over three years (2012–15). This new episode of strong yen, strong euro matched by a weaker dollar and weaker yuan has just begun.

“We could see the yen trade through 100 to the dollar and the euro trade through $1.20 before it’s time to pass the canteen again. That’s plenty of leeway for you to profit from the currency wars.”

Indeed there is — and you don’t have to play the risky and complicated forex markets to do it, either. On Tuesday, readers of Currency Wars Alert were clued in to a way to generate “Shanghai Accord” gains of up to 276% before year’s end. And three more related trades are on the way between now and Memorial Day.