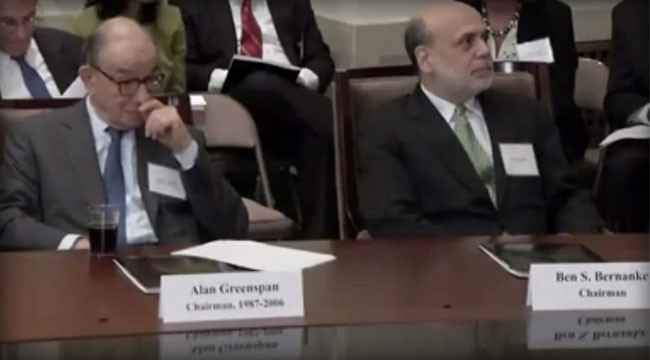 The scene: Monday, inside the ornate board room of the Federal Reserve’s Eccles building on Constitution Avenue. Thirty-four years’ worth of Fed chairmen were present — Paul Volcker, Alan Greenspan and Ben Bernanke. The occasion? The celebration of 100 years since the signing of the Federal Reserve Act. We watched the whole hour and four minutes on YouTube so you don’t have to.

Each chairman spoke in turn, nary uttering one ill or critical word of their counterparts:

“In my time,” boomed Paul Volcker first, “interest rates were at 20% and we were preoccupied with inflation. Chairman Bernanke is ready to leave office with interest rates at zero.”

The Fed is going to let the dollar die at the hands of the Chinese far before the next century is over.

After him was current chairman Ben Bernanke, who began his last FOMC meeting today. (We could hardly…*sob*… hold back the tears as we watched him speak. Seven years feels like just yesterday…)

“Given the well-known difficulties that economists have in forecasting even the next few quarters,” he said ironically to a roomful of laugher, “I will happily point out one important advantage in making a 100-year forecast, which is that I won’t be around to explain why the forceast went wrong…”

Then, in the spirit of “forecast season,” Bernanke made a 100-year prediction:

“I can venture one prediction that I don’t think is too bold,” he said. “The values that have sustained and served the Federal Reserve at its best and have permitted it to make critical contributions to the economic health of our nation during the past century will continue to serve it and the nation well in the century ahead.”

Really… We’ll take the other side of that bet, thank you very much.

In fact, we’re going to cut Bernanke’s forecast off at the ankles. Here’s our own bold prediction: The Fed is going to let the dollar die at the hands of the Chinese far before the next century is over.

Let’s back up a bit…

Our forecast, like most economic forecasts, traces its roots back to a dead economist. This one’s name is, rather, was Robert Triffin. Mr. Triffin prophesied China would tank the dollar — way back in 1960. Back then, he issued a stark warning to Congress all but foretelling the demise of the dollar’s role as the world’s currency of choice. Triffin prophesied that any reserve currency was ultimately doomed… at the time he cited the cracks he’d already observed in the foundation of the Bretton Woods system established after World War II.

“As the global economy expanded,” Reuters columnist John Kemp gives us a head explaining, “demand for reserve assets increased. These could only be supplied to foreigners by America running a current account deficit and issuing dollar-denominated obligations to fund it. If the United States stopped running balance of payments deficits and supplying reserves, the resulting shortage of liquidity would pull the global economy into a contractionary spiral.

“But Triffin warned that if the deficits continued, excess global liquidity risked fueling inflation. Worse still, the buildup in dollar-denominated liabilities might cause foreigners to doubt whether the United States could maintain gold convertibility or might be forced to devalue.”

In a nutshell, this economic conundrum is known to academics, policy wonks, arm-chair economists, cranks and financial newsletter editors as “Triffin’s dilemma.”

For most of the ensuing 53 years, Washington has chosen the latter of the two options, flooding the world with dollars. Triffin prophesied the inevitable result, in four stages…

In Stage 1, the Bretton Woods system would collapse as other nations traded in their dollars for gold, draining the U.S. Treasury’s gold stash. Sure enough, President Nixon “closed the gold window” in 1971 and cut the dollar’s last tie to gold.

Then, the dollar’s drop in value would accelerate and U.S. exports would decline dramatically. Sure enough, “Japan Inc.” gave the world cheap electronics and cars in the ’80s and early ’90s while buying up choice U.S. real estate like Rockefeller Center.

After that, the U.S. would run massive budget deficits in the third stage, egged on by Federal Reserve money printing, ultimately triggering a financial crisis.

Let’s see… hmmmm…yeah, check…. that was the Panic of 2008. The detritus from which we’re still coping.

Well, China’s been quietly setting it. It’s allowing the yuan to strengthen gradually — 30% over the last eight years. Most recently, China’s central bank announced it will stop increasing its dollar reserves, allowing its currency to strengthen even more. At the same time, the government is silently building a huge stash of gold to back the yuan. The goal is to have a yuan that’s “fully convertible” to other world currencies by 2015.

During the last two years, seven of the world’s top 12 economies have moved to bypass the dollar in their transactions with China. Even Japan is in on the act: Despite a wicked border dispute between the two governments, plans are in the works to trade directly in yen and yuan.

What happens when the rest of the world no longer needs dollars to do business? For a sneak peek… we observe some political wrangling on the opposite side of the globe and forecast new intrigue in 2014 known colloquially as “the pivot”. You can read the whole assessment, right here: Looking For Enemies in All the Right Places

Ed. Note: Only time will tell whether the US dollar maintains its status as world reserve currency. But, as Addison points out, the dollar’s days are certain to come to an end eventually. And when that happens, you’ll want to know exactly how to protect yourself — specifically your wealth and the wealth of your family. So stay informed. Soak up as much information as you can, in fact. It’s one of the only weapons you have against an uncertain future. We suggest you start by signing up for The Daily Reckoning, for free, right here.