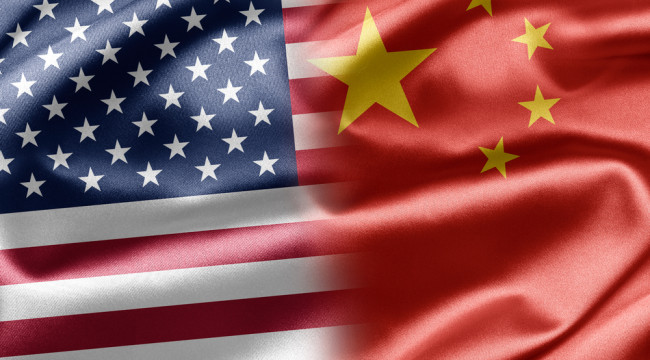 Looking For Enemies in All the Right Places

The year 2013 is ending much the way we described it at the start: China and Japan holding a urination match over some tiny uninhabited islands — with the United States in the, um, line of fire.

Fortunately for the lives of those soldiers who have sworn to uphold their leaders’ promises to engage, that’s all it’s amounted to. But as we noted in January and again in early October, the threat of hot war is ever-present. And the United States is obligated by treaty to side with Japan.

As for a “new enemy,” it took more than 20 years of stumbling about for Washington to find a suitable one. Saddam Hussein was a placeholder for a while. There was also the amorphous “terror,” which is no longer deemed worthy of a “war on,” but merely designated as “overseas contingency operations.”

Enter China: “Since the disappearance of the Soviet Union,” writes James Dobbins at RAND Corp., “China has become America’s default adversary, the power against which the United States measures itself militarily, at least when there is no more proximate enemy in sight.”

Thus is the United states “the most intrusive outside actor in China’s internal affairs,” write Andrew Nathan and Andrew Scobell in Foreign Affairs, “the guarantor of the status quo in Taiwan, the largest naval presence in the East China and South China seas, the formal or informal military ally of many of China’s neighbors and the primary framer and defender of existing international legal regimes.”

And that’s with “the pivot” barely underway. In November 2011, when Hillary Clinton was still secretary of state, she declared, “The United States stands at a pivot point” — withdrawing troops from Iraq and Afghanistan and shifting attention to East Asia. The D.C. wonk class has spoken of “the pivot” ever since.

Two years on, we daresay history might well look upon this moment as the formal declaration of a new Cold War.

According to former CNN journalist Mike Chinoy, the pivot entails the Navy locating “60% of its assets” in the Pacific Ocean. “It will involve deploying six aircraft carriers, destroyers, littoral combat ships, submarines and an increase in military exercises and port visits.” 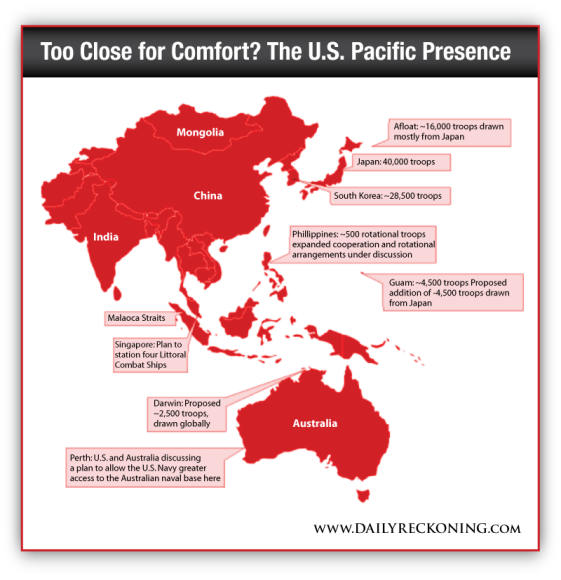 Nor does it end there. “One means of improving the prospects for direct defense and reducing the risk of escalation,” writes RAND’s Dobbins, “is for the United States to enable the capabilities and buttress the resolve of China’s neighbors.

“Such a strategy,” he adds, “should not be — or be seen — as a U.S. attempt to encircle or align the region against China, lest it produce greater Chinese hostility.”

Too late: No sooner did Clinton declare the pivot than the Center for Strategic International Studies forecast “a shift in Chinese foreign policy based on the new leadership’s judgment that it must respond to a U.S. strategy that seeks to prevent China’s re-emergence as a great power.”

“Buttressing the resolve” of China’s neighbors is only the beginning of U.S. strategy, however. The Pentagon has formulated a strategy called Air-Sea Battle (ASB).

The aim is to sprinkle so many bases and airstrips around the region that China would be too hemmed in to safely attack if conflict broke out.

“Stealthy American bombers and submarines would knock out China’s long-range surveillance radar and precision missile systems located deep inside the country,” reads a Washington Post scenario. “The initial ‘blinding campaign’ would be followed by a larger air and naval assault.”

Could such a strategy backfire? “Some Asia analysts worry that conventional strikes aimed at China could spark a nuclear war,” the Post goes on. Other critics “see a dangerous tendency toward alarmism that is exaggerating the China threat to drive up defense spending.”

The Pentagon insists ASB — and the pivot in general — is not aimed at China. For the moment, the Chinese are playing along with the pretense. After a meeting with Defense Secretary Chuck Hagel in August, China’s defense minister, Gen. Chang Wanquan, said, “China is a peace-loving nation. And we hope that [America’s] strategy does not target a specific country in the region.”

The reality is rather different. “China will be much more discreet throughout the entire region because U.S. power is already there, it’s visible,” says Anthony Cordesman from the Center for Strategic and International Studies. “You’re not talking theory. You’re already there in practice… As part of this rebalancing to the Pacific, you have to show people it’s real at a time when so much of U.S. power is increasingly questioned by our budget debates.”

And indeed, the effort can be made without spending (much) more money. “We’re not gonna build any more bases in the Pacific,” says Gen. Herbert “Hawk” Carlisle, commander of all U.S. Air Force resources in the region. But existing bases will be expanded and abandoned bases will be reopened — including the airstrip on the island of Tinian where the Enola Gay took off with its atomic payload destined for Hiroshima.

Indeed, the very notion makes Gen. Carlisle almost misty-eyed with nostalgia. “Back in the late, great days of the Cold War, we had a thing called Checkered Flag: We rotated almost every CONUS [Continental United States] unit to Europe. Every two years, every unit would go and work out of a collateral operating base in Europe. We’re turning to that in the Pacific.”

Asia is the main theater of the brewing U.S.-China war. But the “security guarantees” aren’t only for Japan. In October, Secretary of State John Kerry met with Philippine Foreign Minister Albert del Rosario. “I want to emphasize the strength of our relationship,” said Kerry, “and the bilateral ties that we have that are literally unbreakable.” Like Japan, the Philippines are locked in a dispute with China over a handful of islands.

Washington insiders, reading between the lines of Kerry’s remarks, saw the implication that “the U.S. has a direct interest in resisting Chinese territorial claims in the South China Sea” — as the words of the Washington Assessment and Analysis Service phrased it.

“It is not premature,” the briefing adds, “to detect a hardening of U.S. resolve not to accept Chinese assertiveness in the region without a challenge.”

Put it another way: Washington is bound and determined to intervene in a messy dispute over islands in the South China Sea. The spaghetti-looking lines on the map nearby represent the competing territorial claims of not only China and the Philippines, but three more nations as well. The long U-shaped line is China’s claimed domain. 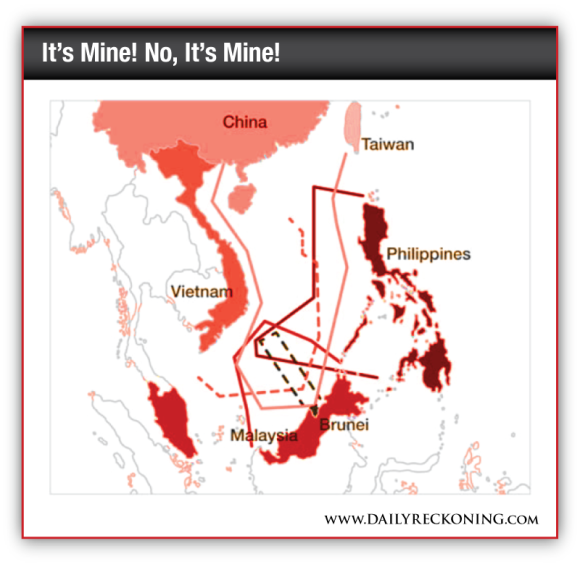 It’s as if the United States were arguing with Mexico, Cuba, Jamaica and the Bahamas over some islands in the Gulf of Mexico… and China asserted a “vital national interest” in the dispute, backing up that assertion with the presence of warships.

As we said, the empire has a logic all its own. “America,” writes Independent Institute foreign policy scholar Ivan Eland, “is now borrowing money from China to subsidize the defense of rich East Asian allies in their quest to militarily counter… well… China.”

There’s nothing you or I can do to stop the madness. So we seek to follow the money and help you channel some of it to your own pocket, reclaiming your lost tax dollars.

Ed. Note: By “following the money,” Addison has given his readers regular opportunities to live wealthier and happier than most Americans realize is possible. It’s the reason he co-founded The Daily Reckoning more than a decade ago, and what fuels his writings to this day. If you want to be ahead of the curve in your quest for wealth and freedom, your best bet is to subscribe to the FREE Daily Reckoning email. It contains multiple chances to discover real, actionable profit opportunities every single day. And it’s sent straight to your email inbox, completely free. So you’ve got absolutely nothing to lose. Don’t wait. Learn how to sign up, right here.