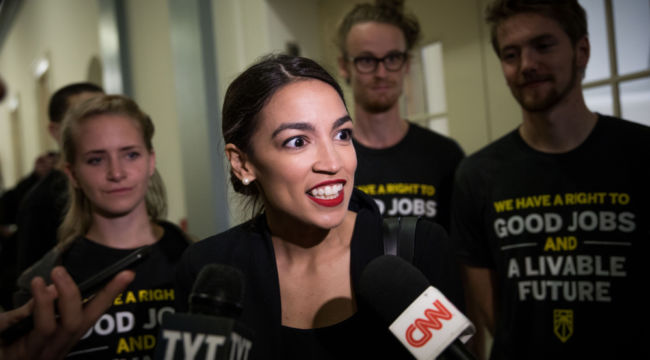 We took command of The Daily Reckoning fully aware of the bodily risk, reduced here to words by our co-founder Bill Bonner:

In our trade as newsletter publishers, hardly a day passes without a good laugh. Our only occupational hazard is a rupture of the midriff.

Sometimes — though rarely — they combine in the form of a single person.

The trouble with them all is that they are vastly amusing. Hence the constant threat of an abdominal tear.

For there she was on 60 Minutes, the latest political sensation, Alexandria Ocasio-Cortez — AOC from here forward.

A former waitress, AOC was serving food 1.5 years ago. As the newly installed representative of New York’s 14th Congressional District, today she is serving notice…

That every American is to be guaranteed productive employment…

That Medicare for all will cure the nation’s ailments…

That free college is as elemental a right as life itself…

And that the ultra-rich will pay all the freight.

AOC’s solution is a 70% tax on all income exceeding $10 million per year.

“There’s an element where, yeah, people are going to have to start paying their fair share in taxes,” said she in the Queen’s English.

We have no objection to a man paying his fair share.

But what is fair? And who decides?

“Render unto Caesar what is Caesar’s,” said Jesus our Lord.

But He never specified precisely what was Caesar’s.

For the United States government, the answer was 7% when the income tax went upon the law books in 1913.

This was the top combined tax rate for those earning $500,000 or more.

But America is a much fairer society today.

It is such a shame the AOC plan will never make it ashore.

It is fatally holed below the waterline… like the Titanic by its iceberg.

Any third-rater can see there aren’t enough super-rich to fleece.

What is the tax haul once the 70% rate kicks in?

According to Mark Mazur, former Treasury Department official now laboring for the Tax Policy Center — some $72 billion annually when all factors are considered.

But how will a slight $72 billion bump substantially fund a Green New Deal… jobs for all… universal Medicare… free college tuition?

And that is assuming the rich sit still, waiting for the tax man to seize them by the collar.

But the rich are moving targets

They tuck into loopholes within the tax code. They dodge into overseas tax shelters. They hide under shell companies.

Who knows how much money the tax would haul aboard once the accountants are done with it?

And as anyone who has looked at it honestly knows — the great broad middle class is where the real tax money is.

“That’s where the money is.”

But the fact is best not mentioned in polite company… or at campaign rallies.

Ah, but the great and the good have leapt to AOC’s defense, including Paul Krugman — winner of the Nobel Memorial Prize in Economic Sciences:

Peter Diamond… in work with Emmanuel Saez — one of our leading experts on inequality — estimated the optimal top tax rate to be 73%. Some put it higher: Christina Romer, top macroeconomist and former head of President Obama’s Council of Economic Advisers, estimates it at more than 80%.

But how would they know?

Have any of them ever earned over $10 million per year?

If they did… might they think of better things to do with their millions than hand them off in taxes?

But our enthusiasts will counter that the top tax rate exceeded 90% during the 1950s — when Eisenhower’s America bestrode the world like an economic Colossus.

It was obviously to no detriment whatsoever, they say. To the contrary in fact.

Yes, but misguided roosters claim credit for the dawn…

We might remind the 70%-90% crowd that the United States industrial machine was unscratched by WWII.

Meantime, much of the industrial world remained under rubble in the 1950s.

Thus America stole a lovely march on the competition. How could it be other than first?

The 8th Air Force likely explains the business far better than any tax on America’s rich.

And American economic kingship gradually yielded as Europe and Japan rebuilt the factories.

But to return to our budding young democratic socialist…

Its objectives include “eliminating greenhouse gas emissions from the manufacturing, agricultural and other industries” and “meeting 100% of national power demand through renewable sources.”

But if you think its purpose is to simply lower a global fever, you are far off the facts.

The Plan for a Green New Deal shall recognize that a national, industrial, economic mobilization of this scope and scale is a historic opportunity to virtually eliminate poverty in the United States and to make prosperity, wealth and economic security available to everyone participating in the transformation.

Was any Soviet five-year plan one fraction so ambitious?

The communists could never get a handle on their own steel, iron and rubber.

But AOC and her fellows would command Nature herself… and dictate her temperature across all four corners of Earth.

And eliminate poverty into the bargain!

This much is certain:

It would be a “green” New Deal in one sense:

Loads of green would fall into the pockets of the clean energy industry.

It cannot go on its own without massive taxpayer subsidies.

Thus the corporations AOC normally thunders against would get their buckets in the stream, their snouts in the trough… and their hands in taxpayer pockets.

There is a term for it: crony capitalism. Endorsed, no less, by a socialist.

Let it never be said that politics lacks ironies.

If you happen to believe the plan is radical, you are in excellent company. AOC herself:

“If that’s what radical means, call me a radical”

We have nothing against radicals. In fact, we much esteem them.

They are far more interesting to listen to than members of the rotary club… or dentists… or presidents of banks.

Those who actually believe the absurdities issuing from their own mouths take on additional fascination.

We suspect AOC is pleasant enough off duty.

In her personal life she may be amiable, engaging and — like most people — reasonably sane.

But put her in power, put a nightstick in her hand… and you have unleashed a public menace.

She becomes the humanitarian with the guillotine.

As the great Mencken styled it:

“The urge to save humanity is almost always a false front for the urge to rule it.”

A nation can survive its fools, argued writer Taylor Caldwell — but not its traitors.

But we begin to suspect it’s the other way around…

The fools are far more common. And much more likely to succeed.

But what spectacle it all provides, what theater, what circus. And we enjoy a front-row seat to the entire show.

We would not give it up for all the perfume of Arabia.

A man in our seat is truly a man enthroned…

Despite the occupational hazard of a ruptured midriff…