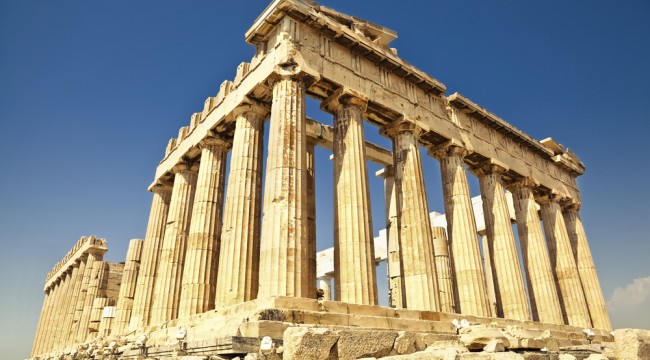 Eurozone to Greece: You've Got 3 Days

This should go well. Reuters reports:

“Greece has three days to reassure Europe and the International Monetary Fund it can deliver on conditions attached to its international bailout in order to receive the next tranche of aid, four eurozone officials said on Tuesday.”

Per the usual, Greece is expected to have a hard time delivering. The hilariously short time frame likely won’t help. The deadline hinges on budget reforms, which Greece has largely failed at. Reuters warned that Greece’s failure to deliver on time could mean the eurozone’s tenuous stability “could unravel at a time when tensions are rising in other countries on the region’s periphery.”

Investors are balking… the Athens Stock Exchange General Index (ASE:IND) is down 27.59 points, about 3.4%.

That’s not all. When the deadline passes, predicts Zero Hedge, the “Cyprus model” is going to be expanded:

“If, indeed, the troika is set on purging Greece,” explains Zero Hedge, “it can only mean one thing: Cyprus part 2… With the Cyprus bail-in failing to lead to epic chaos and a financial collapse, the troika’s confidence appears raised that what worked in Cyprus can work just as well in Greece.”

If the Greek government does bail itself in to meet the IMF’s demands, we could be in for a wild ride. “As citizens and account holders in Cyprus are quickly learning,” Matt Insley said back in March, “the monetary world that we’re used to can change on a dime… the monetary plague doesn’t stop at Cyprus.”

Bitcoin took off during the last bail-in fiasco, so it may be worth keeping an eye on.

P.S. Finding creative ways to protect your wealth is getting more important as governments find more creative ways of stealing it. And Daily Reckoning readers have a leg up in that regard. Click here now to start receiving The Daily Reckoning email edition for regular opportunities to preserve and even grow your wealth before the government can take any more of it away from you.

As the U.S dollar fades behind after a muddled Trump-trade, the euro gains investor attention. Here’s why “More Europe” will be the economic policy for months and years to come… Discover what’s ahead for Europe…