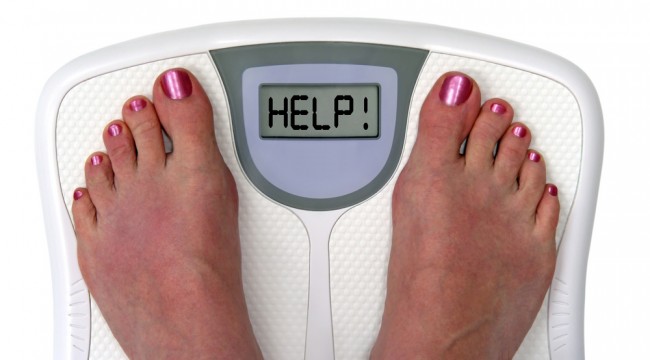 Eradicate an Epidemic - and Make 400% Gains in the Process

“Not one country has reduced its obesity rate in 33 years,” says this morning’s New York Times.

The story is buried on Page D5. Which means few people will see it. And fewer still will make the connection to a once-in-a-lifetime profit opportunity set to break two weeks from today.

“Nearly 30% of the world’s population is overweight or obese,” says the Times story, drawing on a new “meta-study” published in The Lancet, mashing up three decades of figures from 188 countries.

The study is full of cocktail-party curiosities. The highest obesity rates turn up in South Pacific nations like Tonga and Middle East nations like Kuwait. Koreans are generally slender, whether they live in the backward North or the prosperous South.

The United States? Americans account for less than 4.5% of the world population… but 13% of the world’s obese.

But again, the common factor is that not one nation among the 188 studied has seen its obesity rate fall since 1981.

“I spent my entire life… feeling so self-conscious that… I didn’t even go to my senior prom, or have my first real kiss,” writes a 23-year-old who goes by the online pseudonym Meg Kane.

Her blog, Diary of an Obese Girl, is at times a plea for a normal life. “I want to be happy… I want to run around and play, even though I’m 23 — I want to be a kid again.”

Her blog was first brought to our attention by our investment director Paul Mampilly. “According to the Centers for Disease Control,” he explained, “one out of every three people in the United States is obese like Meg Kane. In other words, if you gather 100 people into a room, 33 of them are going to be obese.

“Our obesity epidemic began when the U.S. government approved the use of a chemical called aspartame to be used as a sweetener,” Paul went on.

“It’s a factory-made chemical — like bleach or battery acid. Except food companies dump this chemical into what you eat.”

Aspartame came on the market in… drumroll please… 1981.

Suddenly, your editor’s cluttered memory started kicking in. Aspartame — aka NutraSweet, or simply “the blue stuff” — was developed by the former G.D. Searle & Co., now a part of Pfizer. Searle’s CEO at the time was the former — and future — secretary of defense Donald Rumsfeld.

Aspartame’s arrival on the market was a revelation. The following year, Coca-Cola used it to introduce Diet Coke. It was Aspartame that made Diet Coke taste kinda sorta like real Coke and not like the gag-inducing Tab. 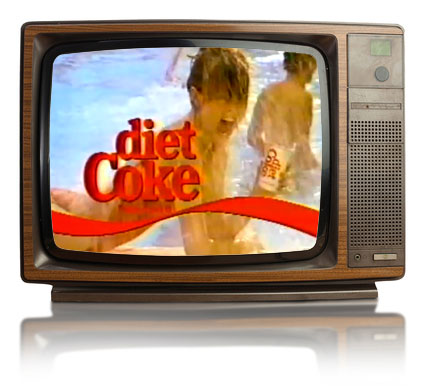 “Just for the taste of it” was the original slogan…

“So why,” asked Paul, “would a food company use such a nasty chemical to sweeten food? What’s in it for the food company?

“The benefit for a food company is that aspartame is 200 times sweeter than sugar,” said Paul, answering his own question. “That means it can be millions of dollars cheaper to use than sugar.

“Now, if natural sugar and aspartame were truly the same, then Meg Kane could live a normal, healthy life. And 33 people in every room would not be obese.

“The ugly truth is that engineering our food to substitute aspartame for sugar and calling it ‘sugar free’ allows you to think you can eat as much of it as you want.

“So we eat more and more and more… until now we’re waking up and realizing that you and those like Meg Kane are being infected by this manufactured, chemically induced disease called obesity.

“We have Frankensteined our food, and it’s made us obese and sick,” Paul went on. The typical American consumes the equivalent of 65 tablespoons of artificial sweeteners every day.

Then he pointed us to the percentage of people who are obese, based on a study called the National Health and Nutrition Examination Survey. “Obese” in this case means a body mass index (BMI) of 30 or greater. (Yeah, we know, BMI is a problematic measurement that labeled Michael Jordan in his prime as borderline obese. But that’s not the point here…) 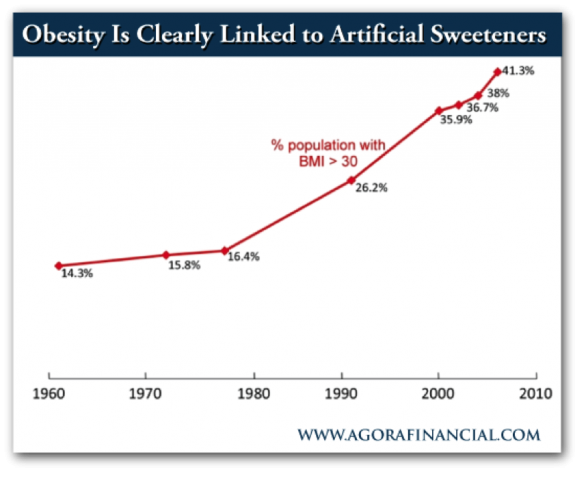 “You see how that red line rockets upward?” said Paul. “It happened right after the introduction of the aspartame chemical as a sweetener.”

Sure enough, another “meta-study” from Yale in 2010 found clear links between artificial sweeteners and obesity. Paul summed up the findings as follows…

As Paul explained all of this, your editor’s eyes started glazing a bit. “Even if we all stopped consuming chemical sweeteners tomorrow,” we asked, “what about the people who are already obese?”

The answer, said Paul — and remember, biotech is his forte — lies not in a drug, but a device.

“It’s the size of a small watch,” he explained, “weighs about a pound and is implanted in the left chest area through a procedure that takes a couple hours. You go home the same day after the procedure is complete.”

The biggest clinical trial to date was phenomenal: Patients who got the device lost 25% of their excess weight. “No other kind of obesity therapy even comes close to these results,” said Paul. “The best weight loss drug on the market right now can help you lose only 9%.”

What’s more, “78% of the patients who got this company’s medical device are choosing to keep it after 18 months. Why would anyone keep using something that doesn’t work? They wouldn’t, and that’s the point.”

P.S. The FDA is due to issue its preliminary verdict on the device June 17. Paul figures that would be good for a quick 150% gain. Final approval would then goose the gains as high as 400%. Readers of today’s issue of The 5 Min. Forecast were given an opportunity to discover the company that holds the key to this device. I’ll be back tomorrow with another chance at this discovery. Find out how to sign yourself up to get it, right here. But hurry… June 17 is just two weeks from today. If you’re interested, now’s the time to bone up on how the device works… and the immense profit potential. Click here to learn how to get started.