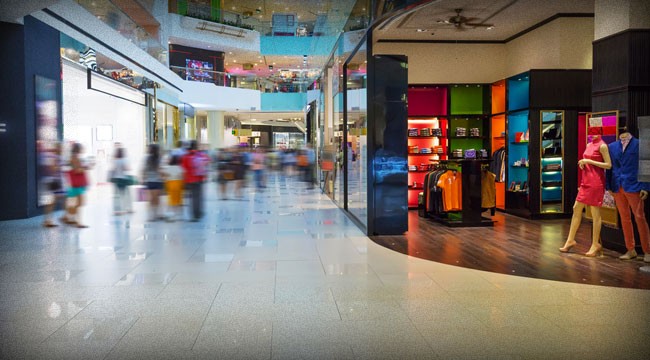 The Federal Reserve is in denial.

The only mystery was how the Fed would justify it in the face of the latest economic numbers — which, by and large, are weak. The Fed opted to declare the weak numbers are temporary.

The Fed seemed especially keen to squelch the notion that the mighty American consumer is withering under the load of accumulating debt — as suggested in numbers we shared here both Friday and Monday. “Household spending rose only modestly,” said the Fed statement, “but the fundamentals underpinning the continued growth of consumption remained solid.”

The mighty American consumer is “impaled on Peak Debt,” our own David Stockman begs to differ.

“Debt-encumbered American consumers are terminal. They are dropping, not shopping, because this entire so-called recovery has been wasted. That is, consumers can’t spend energetically, because there has been no significant deleveraging since the 2008 crisis.”

Indeed, American households are back in hock to the same extent they were just before the Panic of ’08… 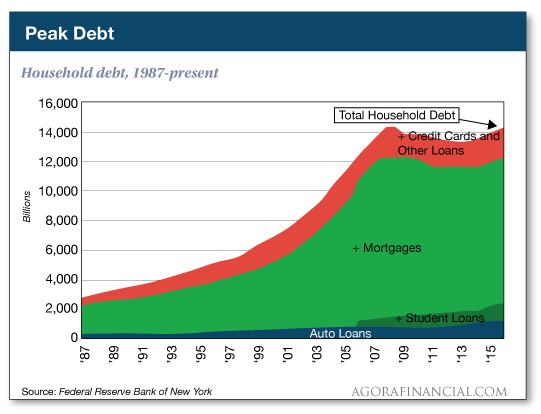 Let’s take each of those categories one by one…

Oh, let’s not forget auto loans — an area where the major banks are seriously pulling in their horns.

Auto loan originations at Wells Fargo are down 29% from a year earlier… and WF is one of the biggest auto lenders. Similar numbers are showing up at other lenders, too.

Fewer loans are translating to fewer auto sales. Detroit’s Big Three reported their April sales numbers earlier this week, and they were dismal.

“The declines are mostly occurring in lending to riskier borrowers, in particular those with low credit scores, where lending had ramped up for years,” says this morning’s Wall Street Journal. The subprime auto bubble, which we spotted here in The 5 3½ years ago, is finally bursting.

The tapping out of the American consumer couldn’t be happening at a worse time for U.S. retailers.

Some more numbers, courtesy of David Stockman: “Reported sales at general merchandise stores in February were no higher than they were 30 months earlier, in August 2014 — and we do mean ‘nominal’ sales. Since the CPI is up 2.8% during the last year alone, inflation-adjusted sales are actually already well into recession territory.

“More importantly, the plunge in department store sales — which comprise the anchor and driver of 70% of mall traffic — has not abated in the slightest. As of the most recent reading, the monthly sales rate was down 30% from the pre-crisis peak.

“Everywhere,” David goes on, “retailers are slashing prices, upping merchandising and promotion expenses and plowing money into renovation, upgrades and conversions to service and entertainment venues — owing to the massive collision of Amazon/e-commerce with the nation’s hopelessly overbuilt brick-and-mortar retail infrastructure.”

Ah, yes, the overbuilding: As David told us here on Monday, there’s about 50 square feet of retail space for every man, woman and child in America. That contrasts with about 10 square feet per capita in Europe.

We recall two years ago telling the story of a coffee-table book called Black Friday — a collection of striking photographs depicting malls already in a state of decay. On the cover is the husk of the Rolling Acres Mall in Akron, Ohio — which closed in 2008: 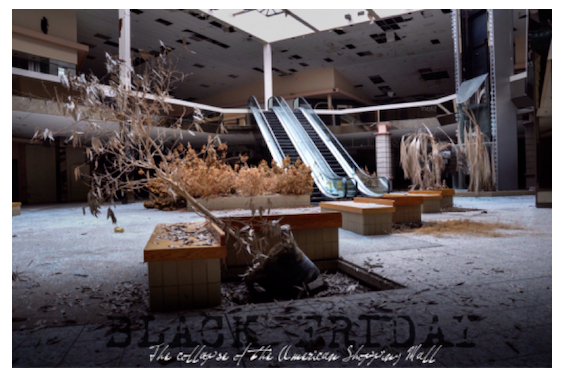 Two years on, the story is reaching critical mass. It’s no longer a phenomenon in only “Rust Belt” cities like Akron. It’s going to happen nearly everywhere… and Wall Street still hasn’t caught on.