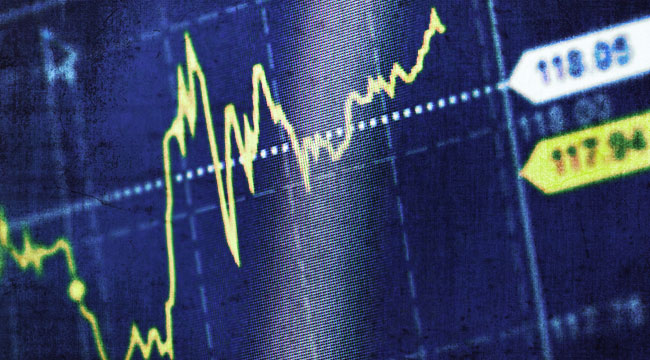 A new meme is spreading in financial markets: The Fed is about to turn off the monetary spigot. U.S. Printmaster General Ben Bernanke announced that he might start reducing the monthly debt monetization program called “quantitative easing” (QE) as early as autumn 2013, and maybe stop it entirely by the middle of next year.

He reassured markets that the Fed will keep the key policy rate (the fed funds rate) at near zero all the way into 2015. Still, the end of QE is seen as the beginning of the end of super-easy policy and potentially the first step toward normalization, as if anybody still has any idea of what “normal” was.

Fearing that the flow of nourishing mother milk from the Fed could dry up, a resolutely unweaned Wall Street threw a hissy fit.

So far, so good. There is only one problem: It won’t happen.

Now, I am the first to declare that the Fed SHOULD abolish QE. Not in autumn of this year or summer of next, but right now. Pronto. Why? Because a policy of QE and zero interest rates is complete madness. It distorts markets, sabotages the liquidation of imbalances, prohibits the correct pricing of risk, and encourages renewed debt accumulation. It numbs the market’s healing powers by enabling more “pretend and extend” in the financial industry. And it adds new imbalances to the old ones that it also helps to maintain.

[Ed. note: Debt deflation is the idea that the market contracts and corrects itself as the overall level of debt decreases.]

QE is nothing but heavy-handed market intervention. It is destructive. It doesn’t solve the underlying problems. It creates new ones.

However, none of these objections even registers at the Fed. The Fed has a completely different perspective: This policy was a roaring success, and as it has worked so well, it can now be faded out. Soon there will be no need for it.

Most analogies are somewhat poor, but this one is particularly inept. Ironically, though, the reference to mechanics captures beautifully the logic of Keynesians and other interventionists: The economy is like a physical object moving through space and is occasionally in need of a little push to get moving again at an appropriate speed. Policy provides the push.

Bernanke doesn’t use these terms, but his thinking is similar. He explained QE to the American public in 2010 by announcing that his job was to occasionally manipulate interest rates and asset prices to encourage lending, borrowing, spending, shopping, and other healthy economic activities. Once his machinations had stimulated enough of those activities, the economy would again enter a virtuous cycle (his words) of self-sustained growth. Escape velocity restored.

I think this is nonsense, however appealing it may sound to many laypersons. The economy is not an object that needs a push, a machine that needs to be jump-started, or a lazy mule that needs a gentle slap on its behind to get going again. The economy is a complex process of coordination. An elaborate tool that allows an extensive and diverse group of actors with different and frequently conflicting goals and interests to cooperate with one another peacefully toward the best possible realization of their own material aims.

A crisis is a failure of that coordination process. It is a cluster of errors. The only explanation for the occurrence of such a cluster of errors is a systematic distortion of the market’s coordinating properties. This occurs when monetary expansion distorts interest rates and other relative prices and leads to imbalances that unhinge the economy.

The economy went into recession because of massive financial deformations. Easy money led to excessive indebtedness, a housing bubble, and dangerous levels of leverage. The problems were these distortions, not the lack of momentum. The real question isn’t whether the GDP statistics exhibit the right velocity. Rather it’s whether the underlying dislocations, which cannot be easily ascertained from the macro data, have now dissolved.

The Fed believes it’s healed an economy that was sick from easy money with more easy money. The patient is feeling better and can soon be released from intensive care.

In my view, the patient is still sick and now suffers from a dangerous addiction, to boot. The “feeling better” might just be a lingering drug high from Dr. Bernanke’s generous medication. Withdrawal symptoms may surface soon. If they do, Dr. Bernanke will simply open the medicine cupboard again. Don’t forget only a few weeks ago, the man appeared on TV and tried to talk up the Russell 3000 stock index.

I do not doubt that, if measured by overall GDP, the U.S. economy is presently doing better. I would be foolish to take on the Fed regarding this point. The Fed has a staff of 200-plus economists, most of them, I assume, from America’s finest universities. This doesn’t mean they are good economists, but they are, at any rate, probably good statisticians. If they say there are signs of life in the economy, that’s good enough for me.

Where I disagree is on the narrative. The deformations are largely still there. How can they not be, given the enormous policy effort to suppress the very market forces that would have exposed and liquidated these deformations in a free market? They are still visible, among other indicators, in high degrees of indebtedness. And they matter. That is why I am distrustful of the Fed’s projections.

Their theories compel them to believe in virtuous cycles and “escape velocity” and to disregard imbalances and distortions. Any sustained removal of super-easy money will allow these deformations to resurface and immediately cloud the short-term cyclical outlook.

According to my worldview, this should be allowed to happen, as it is part of the essential healing process. But it runs counter to the Fed’s worldview and the Fed’s view of its mission.

The one institution that lacks “escape velocity” is the Fed. It will remain hostage to the financial monsters it created and the dangerous misconception of its own grandeur.