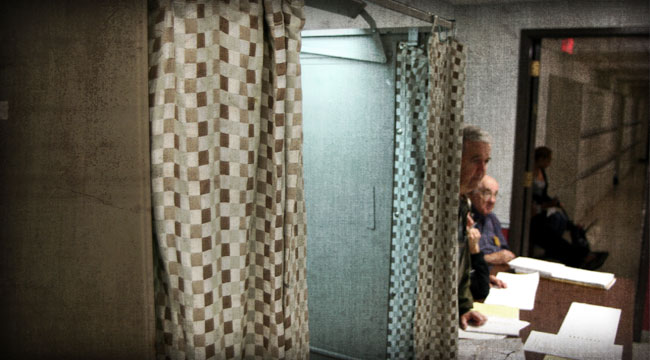 Hmmm… If hackers tampered with Alaska’s online voting, it didn’t make any difference.

As we mentioned in yesterday’s episode, “Cyberattack: How to Rig an Election in the 21st Century”, the North Star state allows any registered voter to cast a ballot online… and the system is easily hacked. With a close Senate race there, it was possible that control of the U.S. Senate would hinge on a contest in which hackers would get the final say without anyone knowing.

The Alaska race is still undecided as we write, but it won’t make any difference as far as which party controls Congress — Republicans won a Senate majority before the clock struck midnight on the East Coast.

The parallels between the 2014 mid-terms and the midterm election of 2006 are eerie — up to and including the possibility we’ll be in another full-blown financial crisis two years from now.

Think about it — an unpopular second-term president, unable to motivate his base to vote against the other guys, much less vote for his own side.

And both times, wage growth was on a downward slide, perhaps fueling the apathy. “Income continues to follow upon a much lower trajectory than anything seen in the postwar era,” writes Jeffrey Snider of Alhambra Investment Partners, in a post on former White House budget director David Stockman’s website. 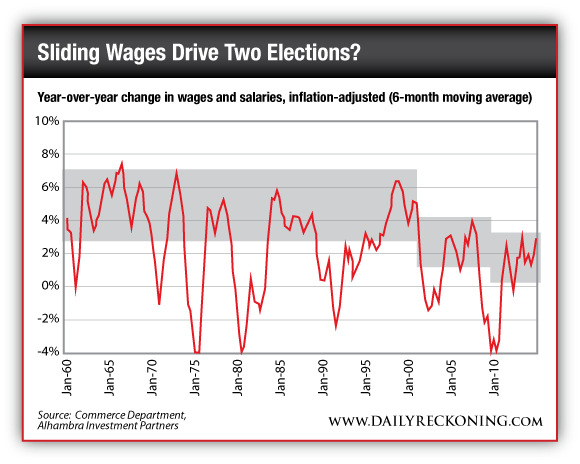 “The range of sustained income growth,” says Mr. Snider, “has diminished in each cycle going back to the dot-com bubble era.”

What’s more, “the latest ‘improvement’ in wages and salaries looks far more like late-cycle behavior than anything of a sustainable and accelerating, full recovery,” Snider adds.

“Late-cycle behavior” is economist-speak for “Look out, it’s probably only going to get worse from here.”

How much worse? Mr. Snider won’t be drawn on that… but if you’ve been with us the last six weeks, you know our own Jim Rickards anticipates a crisis “worse than 2008.” The snowflakes are building one by one toward a financial avalanche.

And there’s no way of knowing which snowflake — a sudden bank failure? Credit crisis in China? A “yes” vote on the Swiss gold referendum? — will set it off. “The financial system is so unstable,” says Jim, “at any moment, it could come crumbling down — there won’t be any warning.”

P.S. If you missed out on our “Prophesy 2015” project with Jim, we suggest you sign up for The 5 Min. Forecast. Once inside, you’ll be first in line for the next opportunity to access Jim’s actionable advice — specific names and ticker symbols he doesn’t share during TV interviews or on his Twitter feed. Click here to sign up now and secure your chance to get Jim Rickards’ Strategic Intelligence as soon as it’s available.

The Next Financial Crisis Is Right on Schedule (2019)