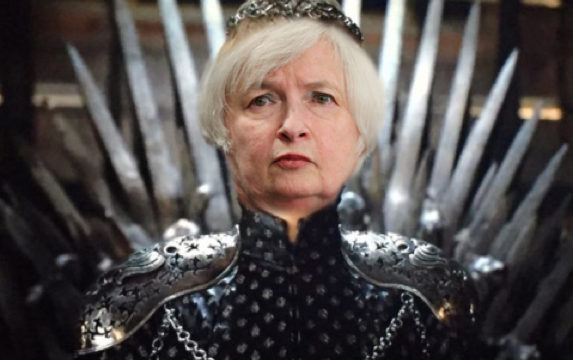 Don’t Get Caught in the U.S-China Crossfire - Game of Thrones Part I

“When you play the Game of Thrones, you win or you die.” – Cersei Lannister

I was late to Season 6 of Game of Thrones (while buried in writing my next book Artisans of Money.) If you have never watched Game of Thrones, a) do so immediately and b) here’s the nutshell. The show, based on the book series, depicts a land in which several kingdoms are duking it out for the Iron Throne, the symbol of absolute power. Think the board game “Risk” except with dragons, magic, an army of the dead, and lots of blood.

While I was watching the show, I couldn’t help realizing that this backdrop is a dead ringer for central banks’ strategy. The Fed clings to status quo. Other central banks are vying to knock it down. But the Fed behaves as if it has no idea there are other powerful central banks in the world that want to grab and harness its power. It carries on refusing to acknowledge that there may come a time, sooner rather than later, where its power is attacked.

The ramifications of such an attack will impact the standing of the U.S. in the world and your investments. The Fed can carry on being oblivious, but you need to be prepared. Game of Thrones is the perfect illustration for the struggles we see playing out right now.

In the Game of Thrones world, an emerging queen, Daenerys Targaryen is biding her time and building and army. She is creating alliances in Meereen, an ancient powerful country in the East (her awesome fire-breathing dragons in tow). She’s figured out how to play the long game and is strategically planning when to elevate the fight against the ruling power in the West, Cersei Lannister.

The most important part of Daenerys’ story is not that she is determined to rule the seven kingdoms and take possession of the Iron Throne. It’s that she knows she can’t do it alone. So she aligns reinforcements, smaller power bases.

These smaller partners may or may not have allegiance to her based on the legitimacy of her claim to power — but they have all been wronged by the Lannister’s. This family, currently led by Cersei Lannister, is extremely wealthy and powerful, but hasn’t managed to lead the western kingdom, Westeros, to wealth and power. In fact, the people in Westeros are becoming increasingly frustrated and scared of their rulers. (You see the similarities?) 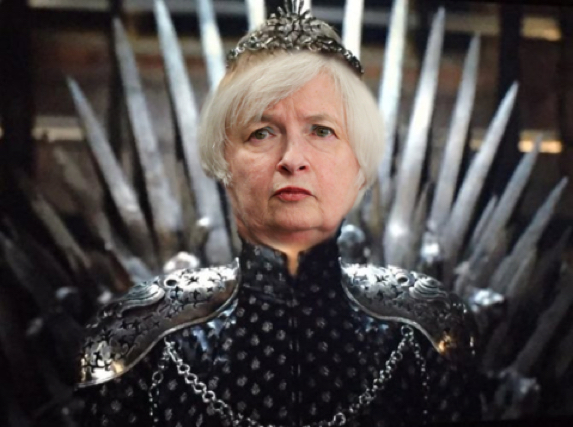 Not only has Cersei managed to create enemies out of the smaller families that surround her, she recently massacred a large portion of the city she rules to protect her own interests. She is losing her power domestically and globally, but continues to think and act as if she will rule forever. We’ll see what happens next season.

Obviously in this situation, the Lannisters are representing the U.S. and the Fed specifically. The Fed remains in denial about the true state of the domestic and global economies. In its realm of hubris, it has no idea of the steps other central banks are taking, or want to take, to reduce their exposure and reliance on not just the U.S. dollar, but on U.S. political, monetary, financial and regulatory policy in general.

Case in point. The Dow dropped 250 points on September 9th. On September 12th, Asian markets nose-dived on the possibility that the Fed might raise rates (though it said nothing of the sort — the “rate tease” is a manifestation of deliberate Fed obfuscation and media boredom). This is a pattern that plays out every month, with varying degrees of intensity, or volatility.

Enter three of the Fed’s giants, led by Lael Brainnard. During her speech at the Chicago Council on Global Affairs, she backtracked on any tightening talk saying, “the case to tighten policy preemptively is less compelling.”

That calmed markets. That day. It reminded them nothing is changing any time soon. U.S. stock markets rejoiced. Bubble-baiters bought. The Dow soared 1.3%. Elsewhere in the world though, no one wants their market whipsawed by Fed speak. Certainly not the People’s Bank of China.

The PBoC’s approach has been to send out anti-Fed policy sound-bites through elite officials. These clips are picked up by national and international media and then spread to the general public.

On September 13th, for instance, Yi Gang, a deputy governor from the PBoC, told a central banking conference in Vienna, “We’re still very cautious on this (zero-interest rate) monetary policy.” He added going in for the kill, “We have to be very careful and look at the limitations and uncertainty of a zero-interest rate policy, because in China we still have a decent growth rate.” Subtle. What he basically said was “the Fed’s policy is a joke and we’re not laughing.”

In The Game of Monetary Policy, the Fed whacked the idea of “free markets” in the face. The ECB chucked an arrow in its heart. The BOJ sliced off its head. Markets are sustained artificially. The Fed has become, as you’ll read more about in my book, the chief Artisan of Money. Central banks are bankrupt of new ideas to keep the system afloat.

Or are they? While the Fed cut rates to zero, bloated its book to $4.5 trillion, and pressed the rest of the developed world to follow, global skepticism bubbled over. First the Chinese, then Latin America. Then the IMF. Then the Chinese again.

Central bank elite took turns bashing Fed policy and calling for an alternative to the U.S. dollar associated with it. This is the equivalent of financial warfare. The U.S. and Fed struck first. It will take time, but the blowback is in motion.

The U.S. dollar was attached to a financial crisis fueled by big bank recklessness and Fed apathy, followed by a Fed policy that devalued money itself. Many other countries had no choice but to follow the Fed’s lead and directives, but that doesn’t mean they were happy about it. As in Game of Thrones, the choice going forward is to forge strategic alliances with other houses or be slaughtered.

The IMF is one of the houses who will be a crucial player in the new power constructs.

The IMF, created by the U.S. and Europe, has been seeking a broader role in the monetary politics wars. For all the media dissection of every word Janet Yellen utters about rates, the IMF knows the Fed is lost. Its policy hasn’t worked. It ignored this and raised rates last December, despite warnings from managing director, Christine Lagarde.

Market punishment was swift and the damage was global. It caused renewed fear and anger from nations that had already suffered at the hands of the Fed and the U.S. banks it sustains.

The U.S. has the largest voting block within the IMF, which is located blocks away from the White House, but IMF leadership understands how the winds of change are blowing. If the BRICS and a few more developed states were to act as a voting block (or increase their voting power, as they’re attempting), they could potentially dislodge the strong influence that the U.S. has within the IMF.

It was the U.S. voting block that gave Lagarde her job in 2011, and allowed Europe to maintain its 70-year stronghold on the IMF. As a result, Lagarde’s opposition, Augustin Carstens, head of the Central Bank of Mexico, lost that country’s first bid for the role.

In Game of Thrones, this is the story of Tyrion Lannister. He’s Cersei’s brother, but has been loudly critical of her leadership. Originally, he tried to guide his sister towards better practices. She didn’t listen to him.

Now, he has joined forces with Daenerys and is helping her rise to power. His loyal alliance with Daenerys has led him to ascend the ranks again, from another angle. He is well-connected throughout the seven kingdoms. He is strategic. He knows the strengths and weaknesses of all the players. He is formidable despite his size (or in central bank terms, the volume of reserves).

This is the Fed and the IMF. That entity was spawned to augment U.S. central bank and government power in the wake of WWII. Powerful, but not as powerful.

Since the financial crisis, the IMF has been strategically chipping away at the Fed’s power base. Like the PBoC, the IMF has been both criticizing and warning about the impact of Fed policy on other nations. By disparaging the Fed, it is amassing its own power. Its international influence has never been higher.

Under Lagarde, the IMF is doing more than funding development projects and supplying overall currency directives to the world, as was its original mandate. It is reconstructing new alliances amongst countries not involved in its creation. In doing so, it is building its own power by elevating their allies.

On October 1, for the first time in 43 years, the IMF will add China’s currency, the Renminbi (denominated in yuan), into its Special Drawing Rights basket (SDR), or world money. In doing so, the IMF, at the zenith of its own power, has tipped the scales away from the U.S. and the Bretton Woods crew that created it in 1969.

The expanding SDR basket (new world money) is as much a political power play as it is about increasing the number of reserve currencies for central banks.