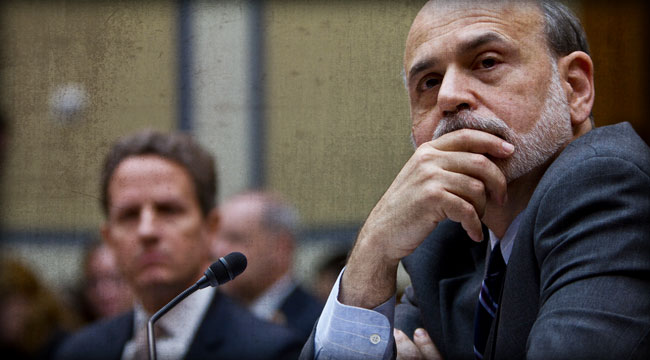 Disproving Richebacher: The Job of Every Fed Chairman

Here’s a smattering of yesterday’s headlines…

From The Financial Times: “U.S. Stocks Slide to 3-Month Lows…”

And from Bloomberg: “Dollar Weakens on Signals of U.S. Economic Slowing…”

As we glanced at them we wondered: Would our late friend Dr. Kurt Richebächer have laughed or cried at what’s going on in the world today?

“All downturns caused by tight money,” he wrote in these pages back in 2006, “were followed by vigorous recoveries. A downturn happening despite low interest rates and loose money seems to us the most worrying kind.”

“I think it’s the job of each Fed chairman to try to prove Richebächer wrong.”

It seems now, more than ever, that worried investors need Dr. Richebächer’s clarity and candid insight.

He left us on Aug. 24, 2007, at age 88 — exactly one week after the Fed announced it was slashing the discount rate “to promote the restoration of orderly conditions in financial markets”… and the housing and credit crisis he forecast was underway in earnest.

In 2005, when Alan Greenspan was telling Congress that the U.S. long-term prospects were bright, Kurt was crying, “Hogwash!” The U.S. is “the sickest economy in economic history,” he told us.

“It suffers from a lack of business investment, a lack of savings, endless credit expansion, a collapse in its manufacturing sector, a massive employment problem, an enormous trade deficit and an enormous boom in the carry trade.”

We can only imagine what he would say in the face of today’s so-called “recovery.” Many of the things Dr. Richebächer predicted send chills up our spine when we read about them now. He was so right on about what was happening with adjustable-rate mortgages, mortgage-backed securities and what he called a balance sheet recession among the banks, which was already underway in 2006.

Fortunately, Dr. Richebächer left us a rich legacy and vivid memories in his wake. As chief economist of Germany’s influential Dresdner Bank for nearly two decades, he had a habit of saying things that antagonized people in high places — and earned the grudging respect of others. At his retirement party in 1982, Federal Reserve chief Paul Volcker paid tribute by saying, “I think it’s the job of each Fed chairman to try to prove Richebächer wrong.”

Even before he left the bank, Kurt began publishing a newsletter read by the world’s most sophisticated investors — The Richebächer Letter. It was our privilege to be its publisher during the final decade of his life. His readers remember him kindly too.

“Dr. Kurt Richebächer!” reminisces one reader. “I remember reading his newsletter, and I was so impressed with his knowledge of economics. I have thought of him often lately and wondered how he would have handled this mess all of us are in. He was the last of the great thinkers of that era that lived in Germany pre-Hitler time. Wish he were available now…”

He was a strong, temperate soul… an old-world gentleman — literate, well traveled, intelligent and critical. And despite all the difficulties he’d seen in his lifetime — war, depression, illness and many long years after his wife passed away — he still enjoyed a good wine, a fine meal and a challenging conversation.

At times, we remember he’d punctuate that conversation by pounding his silver-tipped cane on the floor.

“They don’t look at the data!” we remember him sternly saying of his fellow economists who failed to see what was glaringly obvious to him. That was during a memorable visit to his seaside condo in Cannes, France.

With that complaint and his fiery spirit firmly in mind… we take the pulse of the U.S. economy in this week’s Daily Reckonings. This comes five years after the mainstream insisted a “recovery” got underway. To do so, we’ll draw on the very data Dr. Richebächer found most useful in constructing his forecasts.

Our efforts to carry on his legacy are earnest… but any conclusions we draw are entirely our own. Heh. Stay tuned for more.

Ed. Note: Yesterday, in addition to the above essay from Addison, we featured Bill Bonner’s essay “Channeling Kurt Richebächer…” in The Daily Reckoning email edition. Not only that, but readers were also treated to 3 specific chances to discover real, actionable profit opportunities. If you’re just now reading this, you’re not getting the full story. Sign up for the Daily Reckoning, for free, right here.