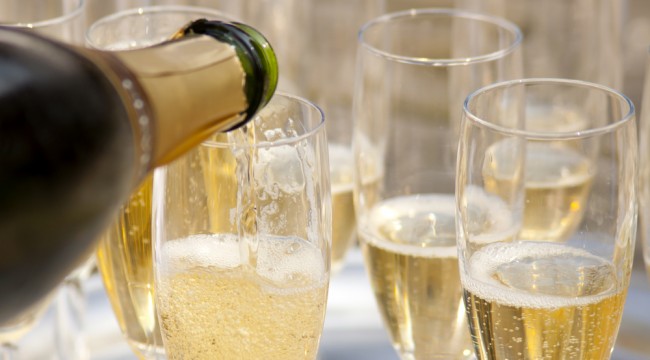 I recently attended an event where one of the speakers suggested that investors should buy “happiness stocks”, examples of which include luxury goods companies such as LVMH (Moët Hennessy Louis Vuitton), L’Oréal, Prada, and Tiffany (he also extolled high-end pleasure boat manufacturers), as well as Nestlé (because it manufactures and distributes chocolates). According to this consumer goods expert, people all around the world are trying to buy happiness, and these companies are suppliers of “happiness goods.”

Personally, I find this concept of “happiness stocks” quite bizarre, as everyone has a different concept of what makes them happy, depending on their socioeconomic status. Low income earners might consider themselves happy if they have enough money to buy food, pay their rent, purchase other necessities of life, and have something left over to buy cigarettes, booze, candy, movie tickets, lottery tickets, consumer electronics, clothing, etc.

…“happiness” comes in a variety of packages, depending on the consumer’s preferences.

Wealthy people, on the other hand, might consider that happiness lies in having enough money to purchase a luxury home or yacht, an expensive watch, fine wines, high-end fashion brands, art and collectibles, etc. In both cases, each purchase will give the buyer some initial satisfaction (happiness), irrespective of whether it is a luxury product or a necessity.

Moreover, happiness products differ depending on age group. A child will generally be far happier eating at a McDonald’s than in a high-end restaurant, where they are likely to feel bored. Younger people tend to enjoy trendy, noisy restaurants, where the quality of the food is secondary to their wish “to see and be seen”; whereas the elderly are likely to feel happier in quieter, more traditional places, where they won’t have trouble hearing the conversation around the table.

In other words, “happiness” comes in a variety of packages, depending on the consumer’s preferences. But I understand what the speaker at that event was driving at. Hundreds of millions of people around the world are joining the middle class, with luxury brands being a prime beneficiary of this social trend. I have some sympathy for this view, albeit with some serious reservations.

In the last few years, the demand for luxury goods has largely been driven by consumers in emerging economies (notably China) who have purchased these testaments to their improved social status either in their own markets or while travelling abroad in the more developed markets of the West. Therefore, if we assume that there was — and still is — a malaise in the emerging economies, a slowdown in the demand for luxury goods is almost a certainty.

Such demand is also driven by asset markets. Rising stock and property markets have a favourable impact on the demand for luxury goods but no discernible effect on the demand for necessities such as food and energy. Conversely, declining asset markets influence luxury sales more negatively than sales of necessities. So, assuming that the great asset inflation will at some point come to an end, a cautious (or negative) stance towards the luxury sector seems warranted.

I should also mention that competition among branded products is fierce, and that some brands may have over-expanded in terms of opening stores in very expensive locations. That all is not well in Luxuryland is evident from the recent performance of the stock prices of numerous luxury goods companies. LVMH Moët Hennessy Louis Vuitton is below its 2012 high, and L’Oréal is lower than it was in 2011. In the meantime, Coach has imploded. 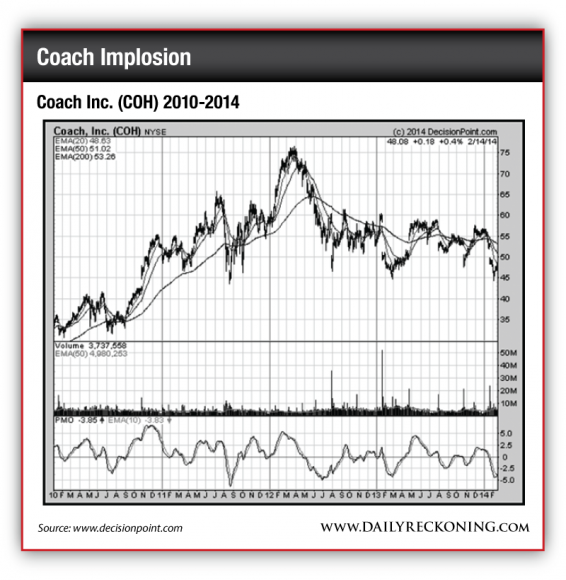 There is another point to consider. In most countries around the world, we are seeing an increase in wealth and income inequality. In order to appease the majority of people whose incomes and wealth failed to rise much, taxes on capital gains, assets, and luxury goods are likely to be increased. Take Singapore as an example. According to the Financial Times of February 6, 2014:

Sales of supercars in Singapore have crashed by up to 90 per cent to their lowest levels in years after government measures aimed at tackling growing social inequality started to take their toll. The Asian city state’s growing population of billionaires has been a magnet for carmakers including Maserati, Lamborghini and McLaren. The British marque opened its first showroom in Singapore last year. But the government, increasingly concerned about a yawning [gap] between rich and poor Singaporeans, introduced two measures in last year’s budget aimed at making the luxury cars less affordable. One measure raised the upfront tax on vehicles, while the other increased the proportion of cash downpayment that drivers require to buy cars using loans. Those measures have sent sales of top-end cars plummeting, with Ferrari registrations down by 92 per cent in the second half of last year, compared with the first half.

Now, I am not suggesting that taxes will rise on Hermès scarves, L’Oréal cosmetics, Chanel dresses, Louis Vuitton bags, and Ralph Lauren polo shirts, but our interventionist governments could easily increase capital gains taxes on the “1%” in order to tackle growing social inequality. Moreover, if the social climate deteriorates, wealthy people may choose to curtail their displays of opulence.

I have mentioned the luxury (high-end) sector of the economy once again because it is likely that we are in the midst of a colossal high-end sector bubble (properties in Mayfair, The Hamptons, Manhattan, and Newport Beach, watches, wines, entertainment venues, fashion stores, cosmetic surgery, prestigious hotels, private jets, sports franchises, art and collectibles, etc.), which is extremely vulnerable to the rats occupying tax offices around the world and the resentment of the bottom 50% of households.

Furthermore, everywhere I go, I hear about how foreigners (mostly Chinese, Latin Americans, Middle Easterners, and Russians) are buying up, or will buy in the future, these properties, that artist’s paintings, those luxury watches, that prestigious car, etc. Considering the meaningful slowdown in emerging economies as well as their weakening currencies, and the “mother of all credit bubbles” in China, I would be far less sanguine about the luxury (high-end) sectors around the world. In fact, how correlated the high-end sector is to asset markets is visible from the performance of Sotheby’s stock price. 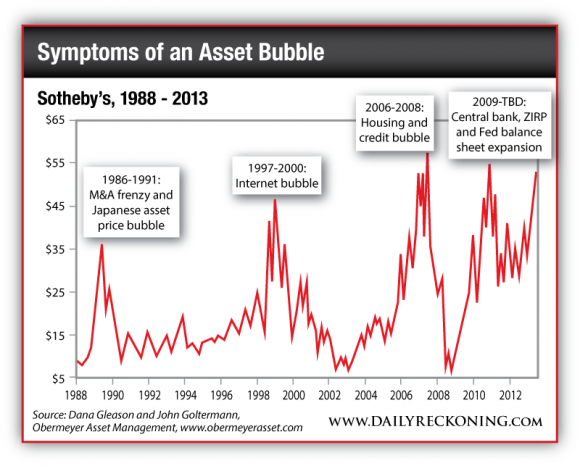 Ed. Note: No matter how you categorize them, the only “happiness stocks” you need to invest in are the ones you’re confident will make you money. That’s what happiness means to us, and it’s why we give readers of The Daily Reckoning regular chances to learn about a plethora of great investment opportunities. Every single day, readers are treated to commentary and analysis from the best names in the financial world, and given a unique shot at real, actionable stock picks in the process. Make sure you never miss another great opportunity like this. Sign up for The Daily Reckoning, for FREE, right here.