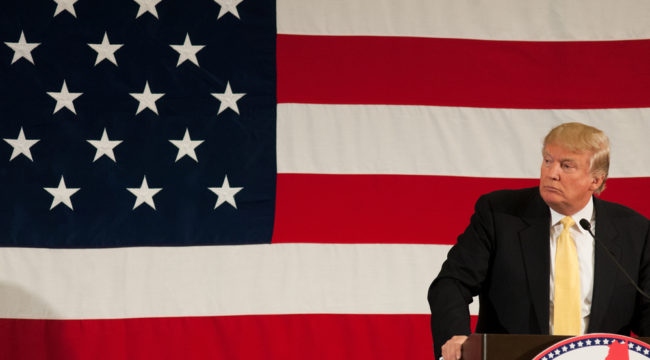 Look at their reaction to his plan to reduce the national debt, which re released this spring. The Washington Post, which is owned by a Deep State member, said it was “reckless.” Wall Street blowhards called it “absurd.” And a former senior U.S. Treasury Department official called it “insane.”

I just referred to a “Deep State member.” What do I mean by the term “Deep State?” It’s a massive conglomerate of insiders comprising government bureaucrats, lobbyists, crony capitalists, Wall Street “banksters” and national security agents. It’s basically a shadow network of institutions that run the country no matter who is in the White House… and without the consent of voters.

So what exactly did Trump propose to get assorted card-carrying members of the Deep State so worked up?

In an interview with Deep State mouthpiece CNBC, Trump said he’d be open to negotiating the U.S. national debt down. He proposed cutting a deal with debt holders so that they take less than the full amount they are owed.

Critics whine his plan is a de facto U.S. debt default that will cause a global economic calamity.

That’s the story the media is breathlessly reporting. But, as usual, the true story is buried deeper.

And it explains why the establishment wants to destroy Trump with all deliberate speed.

So why did the dealmaker Trump look to cut the deal of his lifetime with the national debt? Because he’s focused on something that the Deep State’s candidate, Hillary Clinton, won’t say in public… even though she knows it’s a ticking economic time bomb.

“We’re paying a very low interest rate [on the debt],” he said. “What happens if that interest rate goes two, three, four points up? We don’t have a country. I mean, if you look at the numbers, they’re staggering.”

Historically, interest rates for U.S. government debt have ranged between 4 to 6%. Just before the Great Recession they were between 4.5 and 5.25%.

If interest rates returned to those normal levels, the cost of servicing the debt would rise to roughly $1 trillion per year.

If rates go up to historically normal levels, just paying interest on our debt would cost as much as we spend on the U.S. Departments of Defense, State, Health and Human Services, Education, Homeland Security, Housing and Urban Development, Justice — the list goes on.

And because the government borrows the money to make interest payments, this starts a vicious chain reaction of paying interest on money borrowed to pay interest. Analysts estimate this spiral would cause the national debt to increase more than $60 trillion in less than 20 years.

In other words, we’d be penniless peasants deployed to work on Deep State-owned rice farms. So Trump wants to kick the Deep State in the teeth, so to speak.

Now, let me be clear…

This isn’t an endorsement of Donald Trump. And it’s not an endorsement of his proposal to deal with our massive debt problem. My analysis is to help you see beyond hyperventilating headlines that the establishment feeds you daily.

They want you afraid. Scared. They want you to only think that Trump is outrageous. Remember when they used to portray Ron Paul as a lunatic? They’re trying to do the same thing with Trump… just because he’s anti-establishment.

They want you to think that anything beyond Deep State control is damaging to you. But, whatever your current understanding, make sure you pay attention to the real issue: debt is the lifeblood of the Deep State…

They get rich and powerful while they bankrupt our nation. The last thing they want is to reduce the addiction to debt. They don’t care if our exploding debt ends up ruining millions of Americans in an epic financial collapse.

Productive industry has been replaced by the financial sector’s rise, which has led to trillions in new debt and risky financial derivatives as far as the eye can see — fattening the wallets of the well connected members of the Deep State… but doing little for the rest of us.

That’s why Trump’s statement is viewed as blasphemy. And that’s why the Deep State will do whatever it can to make sure Trump doesn’t get in the White House.

For the past few decades, it hasn’t really mattered who was in the White House. Presidents are mere marionettes controlled by the Wall Street bankers, the big corporations and the military industrial complex.

They give orders. Our elected “representatives” obey… then check their bank accounts for their snack money. In recent decades, this incestuous relationship has produced scores of new regulations, subsidies, privileges and payoffs that ignore the needs of average people while benefiting the elites.

And as each year has passed, more money and influence has flowed from the productive working classes to the Deep State.

So Trump isn’t just up against Hillary. He’s also up against the immensely powerful Deep State. The establishment would rather have Hillary in the White House. She’s a safe bet for the shadow government. Even noted libertarian Charles Koch is touting her. She has been vetted by the Deep State and has amassed a massive fortune for her loyalty.

Trump is a wild card. Nobody knows if he will take orders from the Deep State. And the powers that be are clearly concerned Trump might take their power levers. And now many Americans are finally waking up.

The American people know the game is rigged, which is why Trump has been filling arenas across the country. His message strikes at the heart of the rigged system. And millions of Americans are listening closely. They want to tear it all down. But they’re up against very powerful forces fully invested in getting Hillary elected. And if the Deep State wins?

With the “devil” as the President, we can expect to keep piling trillions of debt on top of debt with no end in sight, until it all comes tumbling down. Then they take what you have left in the name of saving the country.

Don’t you find it strange that the mainstream media never reports on how much money Hillary has been paid by the Deep State?

It’s $153 million and counting over the last 15 years. Don’t you find it odd that if you were the United States Secretary of State and left national secrets on an email server stored in a bathroom that could easily be hacked from Romania, you would be in jail for life… yet she’s on the cusp of becoming President?

Even little kids know this is wrong. They know it’s crooked. And yet, the media focuses the majority of its time on how irresponsible and non-presidential Trump is.

So next time you hear hyperventilating voices from the Deep State railing against Trump and his “dangerous” ideas, just remember… they’re right.

Trump’s ideas are very dangerous… to the wealth and power of the Deep State. And that’s why they want him stopped.