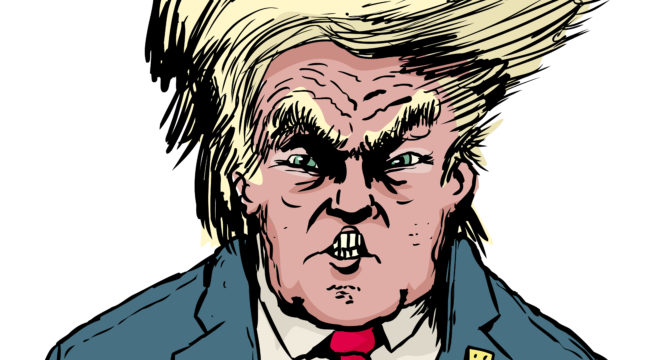 The Deep State Moves on Trump

I began yesterday’s post with a warning about the ludicrous complacency rampant on Wall Street, and that its days were numbered. And that was before the New York Times’ incendiary story about Comey’s butt-covering notes on his alleged conversations with the Donald:

The Deep State has just dramatically escalated its war on President Trump but the Wall Street revilers apparently couldn’t care less. Indeed, when the machines tagged 2402 on the S&P 500 yesterday, it was surely a historic case of “look ma, no hands!”

So here follows some ruminations on why the gamblers will rue the day, and soon…..

Needless to say, it appears that the rueing has already begun.

The overnight media feeding frenzy has finally struck Wall Street in the manner of a two-by-four landing squarely between the eyes.

The Dow has actually dropped 373 points and the VIX “fear index” has shot back way above 11 for the first time after dwelling a record three weeks in the sub-basement of history.

To be sure, this latest “bombshell” is just another installment of the Deep State’s campaign to remove the Donald from office based on the trumped-up Russia meddling story. In this case, it’s even focussed on the thinnest aspect of the entire cock-and-bull narrative.

So if Flynn had the good sense to suggest that Putin not respond in kind because the adults would be arriving in the Oval Office three weeks hence — more power to him. And if that gesture was meant as a first step toward peace with Russia that Trump had advocated during his successful campaign — that would have been all the better.

But alas, the Deep State was having none of it. It was not only wire-taping the calls of the national security council director-designate, but also concocting the ridiculous story that Flynn was now susceptible to Russian blackmail because he had not told VP Pence every word from the unmasked transcripts.

The idea that the Russians could exert undue leverage on Flynn after the inauguration because of these brief conversations is just plain loony. It only makes sense if you assume that Russia is a dangerous world-scale enemy and that peaceful relations amounts to treason.

In fact, Russian is a pipsqueak economy only 7% as large as the US, and has no military capability whatsoever to threaten the safety and security of the American people. It has only one ancient, smoke-belching aircraft carrier tied up in the Eastern Mediterranean and would therefore need to invade the New Jersey shores in a fleet of fishing boats.

At the same time, Washington confrontated Russia at every turn. Even an uninformed outsider with a 140-character attention span like Donald Trump could see that Washington’s Russian policy needed a drastic makeover.

But all of this was beyond the pay and grade of Sally Yates, the nightmare refugee from Hillary’s Harpies that someone in the Trump organization made the mistake of appointing as acting Attorney General.

But the political greenhorns on Team Trump did not recognize that Yates was a career apparatchik of the Deep State, and had been commissioned by the DNC to set them up.

Don’t get me wrong. I think General Flynn was essentially a dangerous nutcase and militarist, but at least he was right about Russia. What Trump should have done was to launch his own witch hunt to identify and prosecute the Obama officials who had authorized the wire-tapping of Flynn and other members of his campaign staff in the first place.

As it happened, the Donald really had no clue why he had hastily fired General Flynn because the man had done exactly nothing wrong. He actually praised him effusively at the very moment he lowered the boom.

In any event, since there was no reason for the FBI’s Russia investigation in the first place. It was patently a political Trojan horse left behind by the Obama/Clinton Democrats. And the Donald apparently made a fatal human gesture of remorse.

That is, after an Oval Office meeting with national security officials the day after he fired Flynn, Trump asked Comey to stay behind apparently to relieve his guilty conscience:

And now 90 days after that surely innocent request, we are suddenly on the doorstep of Watergate. Just ask one of the Deep State’s most insidious operators, Senator McWar of Arizona.

His response to the New York Times story tells you all you need to know about how far the Imperial City has come off the rails of sanity:

“I think we’ve seen this movie before. I think it appears at a point where it’s of  Watergate size and scale… the shoes continue to drop, and every couple days there’s a new aspect,” McCain told Bob Schieffer, the legendary former host of CBS’ Face the Nation, at a dinner where McCain was receiving the International Republican Institute’s Freedom Award.

That’s rich. The Republican Institute is a taxpayer funded propaganda arm of the Warfare State, which is a huge waste and has nothing at all to do with freedom. In fact, its purpose is to fund the same kind of bellicose war-mongering in which Senator McCain specializes.

Nor is McCain alone in his senility and vengeful war-mongering. According to the leading propaganda outlet for the permanent Congressional ruling class, The Hill, the GOP establishment is already losing it nerve, too.

“A whole new door has opened,” said a well-known Republican operative who has worked to help the Trump White House. “A week ago, we were talking about the agenda grinding to a halt,” the Republican said. “Now, the train is going down the hill backwards.”

Yes, and tumbling down the drain with it is Trump’s purported pro-growth Fiscal Stimulus.

Likewise, any prospect whatsoever that Washington can avoid an endless bloodbath on the budget front has surely now been deep-sixed, to reintroduce a term from the Nixon era now upon us.

That is, raising the debt ceiling will be practically impossible. And keeping the Washington Monument open will entail repeated shutdown battles over short-term continuing resolutions.

Still, it is not the exceedingly dim prospects of the ballyhooed Trump Tax Cut that constitutes the real two-by-four about to land upside the head of Wall Street.

What will really send the stock averages plummeting is the accompanying evidence that the so-called recovery since July 2009 is entirely phony and unsustainable. The U.S. economy is tottering precariously on a foundation of economic rot.

I have warned repeatedly that the business cycle has not been abolished by the Fed. And that at nearly 100 months, the current expansion is exceedingly long-in-the-tooth and exposed to every headwind from both domestic and global developments.

To be sure, the rot which will bring on the next recession has been hiding in plain sight all along. But it was Wall Street’s expectation of perpetual stimulus that kept it obscured.

But with the Fed resolutely on the path toward policy normalization and Washington plunging into the nightmare of impeachment, the evidence won’t stay in the shadows for long — even in the deep canyons of Wall Street.

Today’s market bloodbath suggests that the message is finally getting through. But there’s plenty more to follow.