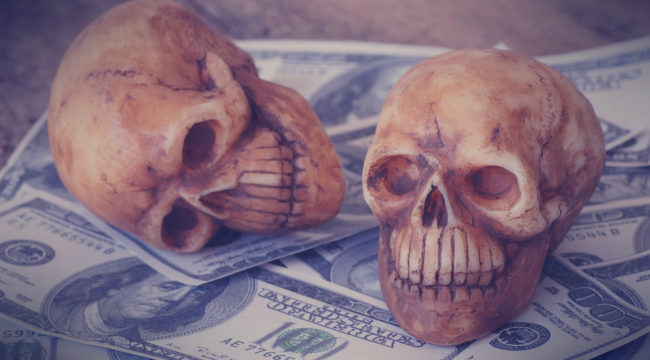 The Day The Dollar Died Part I

Will history record September 4th, 2016 as the day the dollar died? Before continuing, let me make it clear that you aren’t going to wake up on September 5th to find anything noticeably different…

The dollar won’t lose its reserve currency status overnight. It won’t be instantaneously inflated into worthless piece of currency, and we aren’t going to see immediate 90% hyperinflation. None of these things are going to happen.

What I mean is that in the not-too-distant future, maybe five years, maybe three years, maybe less, we’ll look back and say, “That was the date when everything changed. That was the turning point for the dollar and we didn’t see it at the time.” But those who know what to look for will understand the significance of that date.

It all has to do with the International Monetary Fund (IMF) and something called the Special Drawing Right, or SDR for short. World money is another term for it. The SDR is a kind of world money issued by the IMF, based in Washington. The U.S. Federal Reserve has a printing press to can print dollars. The Bank of England has a printing press to can print Sterling. The European Central Bank (ECB) can print euros. That said, the IMF can print SDRs.

When I say print, of course, the money is digital and you won’t be using it to buy groceries or gasoline. SDRs will be digitally created and handed out to member states to serve as a new form of world money. I simply use the word “printing” and “paper money” as shorthand.

On September 4th, does the dollar disappear, replaced overnight by SDRs? No. We are not there yet. But it will be a significant turning point. Before getting to the significance of September 4th, let’s look back in history a bit to frame the context…

Let’s say, pound sterling, if you were sitting around the government ministries in London in June of 1914, you would’ve looked around the world and said, “All is fine with the world.” It was the height of the British Empire.

Pound sterling was backed by gold issued by the Bank of England. It was the world money at the time. You could use a British gold sovereign, a one-ounce British gold coin, virtually anywhere in the world. And everything looked like it would maybe stay that way for the next hundred years.

Then in a very quick sequence of events from the end of June to the end of July, the Archduke of the Austro-Hungarian Empire was assassinated by a Serbian terrorist backed by Russia. That event set in motion the events that led to World War I and the ultimate decline of the British Empire.

When the war started, markets around the world crashed because the belligerents were liquidating their assets to raise money. The U.S. started shipping a lot of gold to the U.K. and Europe because Europeans were selling U.S. stocks to raise cash, convert it to gold to ship it back to Europe. It’s a fascinating story in and of itself. The point is, within a few months, gold was flowing out of New York to the U.K. because England initially sold U.S. securities to get gold.

Today the gold has primarily been going from London to China. But in the summer and fall of 1914 it was going from New York to London and other parts of Europe who needed the gold to finance the war effort. Gold was flowing out of the United States at enormous rate. But by November 1914 it turned around because now the U.K. was desperate for war material. It needed to buy agricultural produce, cotton, steel, weapons, whatever the U.S. could produce. In those days of the classical gold standard, nations had to pay for it with gold, or with paper that could be redeemed for gold.

Suddenly the gold started flowing back to the United States. By the late 1920s, the U.S. was the leading gold power in the world. Britain lost its world standing, unthinkable in June 1914. By the time of Bretton Woods in 1944, the U.S. had about two-thirds of all the official gold in the world because it had been a major manufacturing powerhouse and a major export powerhouse while the rest the world was fighting.

At Bretton Woods in 1944, the U.S. dollar was enshrined for the next 30 years as not only the number one reserve currency in the world, but the only currency that was convertible to gold. All the other currencies were pegged to the dollar and the dollar was pegged to gold. The dollar became from then on the dominant reserve currency of the world up until today. Now that role is in doubt.

Now here is the point: many people look at Bretton Woods and say, “That was the day the dollar replaced the sterling. From then on the dollar was the leading reserve currency, the U.S. had all the gold. Sterling went into a long decline.”

That’s not what happened…

The actual turning point was 1914, was 30 years earlier. You can look at the entire 30-year period from 1914 to 1944 as a long, slow displacement of sterling by the dollar. At the end of the process, the dollar was King and sterling was a very weak currency that couldn’t backup its obligations. It had been given to Commonwealth Trading Partners, but they didn’t want it. By 1944 the U.K. economy was flat on its back because of the war. But the process started in 1914 when the gold started flowing to the U.S.

Nothing that happens on September 4th, 2016, will produce an overnight calamity for the dollar. But it’ll be a key turning point, not unlike November 1914 when the gold flow reversed out of England to New York. Then the dollar began its long ascent and sterling lost its dominance. If you had been a large investor in the U.K. and had seen that turning point, you would have gotten out of sterling assets and converted to dollar assets. You would’ve made a fortune and avoided enormous losses.

The point I’m making about September 4th is that it could be one of those dates in history that people will point to as a similar turning point. Except this process probably isn’t going to take 30 years. It could take 10 years or less. No one knows exactly what’s going to happen. We do know enough to say this will be one of those times when a very small number of astute individuals will know it at the time.

They’ll be able to look at September 4th and see it for what it is, the end of the dollar. 10 years from now it will become apparent that this was the time to get into gold, energy, silver, hard assets, land, fine art, and other assets that will preserve value. It won’t be apparent to most people until years into the future.

Another good example of a turning point that not many recognize at the time is Pearl Harbor. The U.S. suffered thousands of casualties and a good percentage of its Pacific fleet was destroyed or badly managed. It was enormous setback for the United States. But an astute observer would have concluded that, given our vast resources and manufacturing capability, it was just a matter of time before we would overwhelm the Japanese Empire.

A sharp analyst could have said, “No, this is a turning point in world history. This is the end of the Japanese Empire, this is the rise of the American Empire.” It would have been the perfect time to bet on America and against Japan. But few people were thinking in those terms when the U.S. Pacific fleet was in ruins on December 8th, 1941. It’s important to see these historic turning points for what they are.

Tomorrow, I’ll look specifically at September 4th and why I think it’ll be one of those historical dates few will recognize for what it is. But I want to give you the chance to understand exactly what’s going on. The dollar replaced sterling over a 30-year process. Now we’re looking at the process of replacing the dollar with SDRs. And it could start September 4th.

Tune in tomorrow for part II.