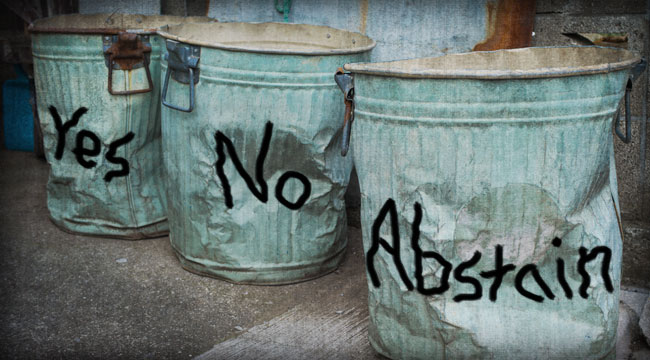 Cyberattack: How to Rig an Election in the 21st Century

“If the Republicans take control of the Senate,” says Independent Community Bankers of America president Camden Fine, “two words for the Federal Reserve: Watch out.”

Ah yes, it’s that day — a momentous day, a potentially game-changing day, a…

Oh, hell, whom are we kidding? 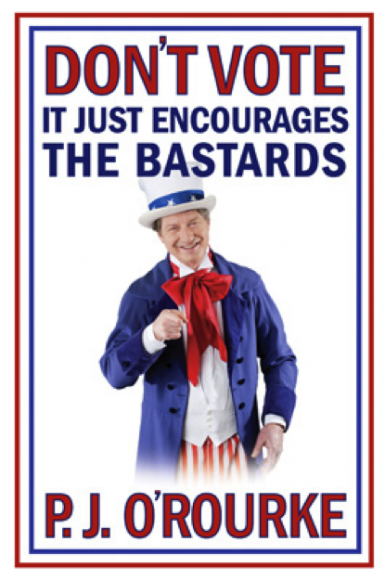 Among other “news” items we see this morning — really, nothing more than the media engaged in self-pleasuring speculation — the Dow Jones Newswires tries to make it sound as if GOP control of both the House and Senate will mean more scrutiny of the Fed. Maybe even — gasp! — “reform.”

Reading stories like this, we’re reminded of a passage from Tragedy and Hope, the massive 1966 tome by Georgetown poli-sci professor Carroll Quigley — whose most famous student was Bill Clinton.

“The argument that the two parties should represent opposed ideals and policies, one, perhaps, of the Right and the other of the Left,” Quigley wrote, “is a foolish idea acceptable only to the doctrinaire and academic thinkers.

“Instead, the two parties should be almost identical, so that the American people can ‘throw the rascals out’ at any election without leading to any profound or extreme shifts in policy.” 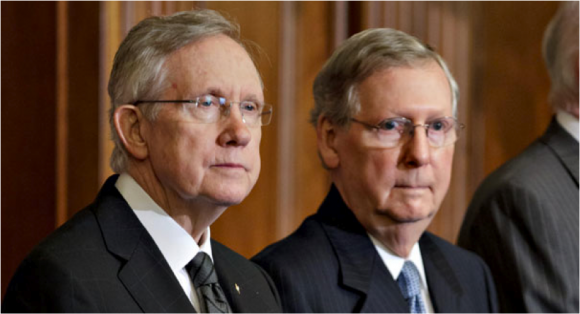 Reid and McConnell (or is it McConnell and Reid?)

But there’s no shortage of people who think the midterm elections are “high stakes”… including, maybe, hackers determined to change the outcome.

“Hackers Could Decide Who Controls Congress Thanks to Alaska’s Terrible Internet Ballots,” says an eyebrow-raising headline at The Intercept.

Two years ago, Alaska became the first state to allow all voters to cast a ballot online. They can mark it on their computers using a Web interface, save the ballot as a PDF and return it to the county clerk.

But wait! There’s fine print that warns, “When returning the ballot through the secure online voting solution, your are voluntarily waving [sic] your right to a secret ballot and are assuming the risk that a faulty transmission may occur.”

Cybercrime experts tell The Intercept the system could be duped from anywhere in the world. “Malware that already resides on many personal computers could be activated to alter votes, PDFs could be altered as they travel from the voter’s computer to that of the elections department, servers could be hacked and insiders could change vote tallies — all without anyone ever knowing.”

Then again, the most powerful defense against hacked elections turns out to be… the paper ballot.

Electronic voting machines are vanishing from polling places across the land, says the D.C.-insider rag The Hill. “Nearly 70% of voters will be casting ballots by hand on Tuesday, according to Pamela Smith, president of election watchdog Verified Voting.”

After the “hanging chad” debacle of 2000, the feds blew $3 billion on electronic voting machines… then left it to the states to maintain and replace them. Whoops, many states say they don’t have the money for that.

So it’s back to the old-fashioned way, and not a moment too soon: Touch screens were a fiasco from the get-go, and they were once again during early voting this year: Votes for Democrats in Texas flipped to Republican, while votes for Republicans in Illinois flipped to Democrat.

[Helpful advice if you insist on voting: This comes from blogger Brad Friedman, who’s done more than anyone else to expose the scandal of “black-box voting” for the last decade.

If you experience a flipped vote on a touch screen machine, “The most important step you can take,” he says, “is to avoid the problem altogether by voting on a hand-marked paper ballot. If you are not allowed to do so on Election Day in your jurisdiction (and you may want to check, because many states and counties allow it but don’t go out of their way to tell voters), then vote on paper with an absentee ballot if you still can. Then deliver it on Election Day to your precinct, rather than mail it in.

“That’s the best way to optimize the chances of your vote actually being counted, and in the way that you had intended.”

There, don’t say we never did anything for you…]

Ed. note: Skeptical as we are that elections mean anything, these developments certainly put a new spin on the cyber-security story we’ve been following for nearly two years: A foreign power, determining control of the U.S. Senate, and leaving no fingerprints? Crazy. And investable. Even as we write, millions of federal dollars are about to flow to tiny cyber-security players that can outsmart the hackers. I gave my 5 Min. Forecast readers a chance to discover which of these companies has the most profit potential – and how to make huge gains because of it. Click here now to sign up for The 5 Min. Forecast and I guarantee you’ll be able to see opportunities just like this in every single issue.