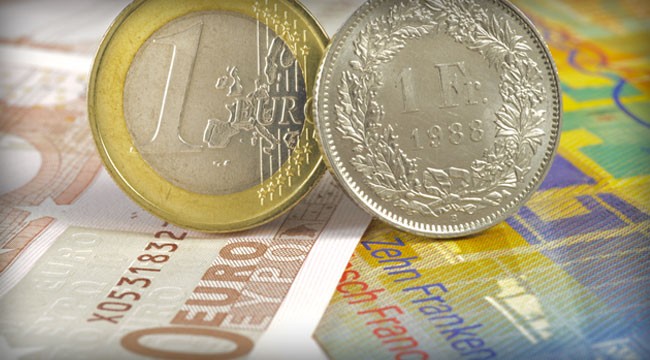 The most dramatic battle yet in the currency wars took place last Thursday. It was the financial equivalent of a Pearl Harbor sneak attack…

“I find it a bit surprising that he did not contact me,” IMF Director Christine Lagarde told CNBC’s Steve Liesman that day, “but, you know, we’ll check on that.”

Thomas Jordan:“I thought you were going to tell her…”

Mario Draghi: “Wait, I thought you were!”

Switzerland had just abandoned its peg of the Swiss Franc to the Euro. The result was mayhem with an immediate 30% drop in the value of the Euro against the Franc, and billions of dollars of trading losses by banks and investors around the world.

Several foreign exchange brokers went bankrupt because their customers could not settle their losing trades. The Swiss operated in total secrecy.

But there is nothing new about the Swiss National Bank’s move. It’s the latest salvo in the currency war that President Obama started in 2010 and it won’t be the last. It was in 2010 that the president announced his National Export Initiative designed to double U.S. exports in five years.

The most dramatic battle yet in the currency wars took place last Thursday.

The only way to do that was with a cheaper dollar, so the president’s policy amounted to a declaration to the world that the U.S. wanted other countries to let their currencies go up so the dollar could go down. Ten months later, the Brazilian Finance Minister, Guido Mantega, shocked global financial elites by publicly proclaiming what everyone knew, but no one would say — that the world was in a new currency war.

The problem with currency wars is they last a long time; sometimes even fifteen or twenty years. The reason is they have no logical conclusion, just back-and-forth devaluations and revaluations as countries retaliate against each other.

The surprise revaluation of the Swiss Franc on Jan. 15 will not be the last such surprise. There are many important pegs left in the international monetary system they are vulnerable to being broken. Right now the Hong Kong dollar and the major Arab currencies are all tightly pegged to the U.S. dollar.

The Chinese Yuan is loosely pegged to the U.S. dollar, too. If the U.S. raises interest rates this year as the Fed has warned, the stronger dollar may force those countries to break the peg because their own currencies become too strong and hurt their exports.

If the Fed does not raise interest rates, the result could be a violent reversal of current trends and a weaker dollar as the “risk on” mantra causes capital to flow out of the U.S. and back to the emerging markets. Either way, volatility is the one certainty.

The other problem with the currency wars is what the IMF calls “spillover” effects, also known as financial contagion. Many mortgages in Poland, Hungary, and other parts of Central and Eastern Europe are made not in local currency but in Swiss Francs. The stronger Swiss Franc means those borrowers need more local currency to pay off their mortgages.

This could lead to a wave of mortgage defaults and a mortgage market meltdown similar to what the U.S. experienced in 2007. This shows how a decision made in Zurich can wipe out a homeowner in Budapest. Financial contagion works just like Ebola. Once an outbreak begins, it can be difficult to contain. It may not be long before the Swiss Franc sneak attack infects investor portfolios in the U.S.

We’ll be monitoring the danger on your behalf. Financial contagion can also be a two-way street. It not only creates dangers, it creates opportunities for investors who can connect the dots in the currency wars. The easiest conclusion you can draw and act on is this simple truth: Do not believe government and central bank lies.

This maxim is not without historical precedent. You’ve probably heard about Franklin Roosevelt’s own sneak currency attack. In 1933, President Roosevelt devised a plan to increase the price of gold in dollars, effectively a dollar devaluation. But he had a problem. If he increased the price of gold while Americans owned it, the profit would go to the citizens, not the U.S. Treasury. He knew that he had to lie to the American people about his intentions in order to pull off the theft of the century.

So Roosevelt issued an emergency executive order confiscating the gold at about $20.00 per ounce, and then revalued it to $35.00 per ounce, with the Treasury getting the profits.

The lesson of history is that citizens should own some gold, store it safely, and don’t believe government and central bank lies. In fact, we could see more investors fleeing to the safety of gold in the coming months as trust in central bankers wanes.

P.S. I gave Daily Reckoning email subscribers a way to access my brand-new Currency Wars Alert. It’s just one of the many benefits of being a Daily Reckoning subscriber. It’s free to sign up — simply click here and you’ll get our team’s insights each day the market’s open.