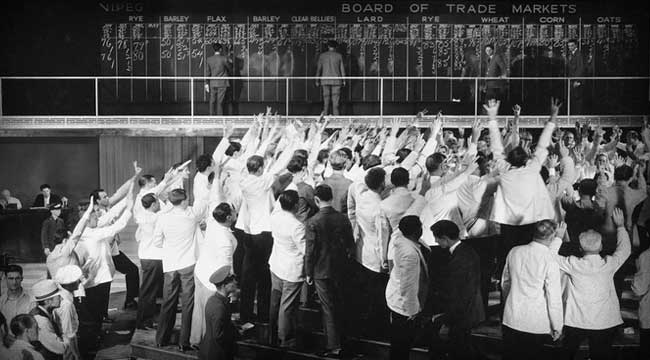 The study of crowds has always fascinated people in finance. It’s not hard to understand why. Markets can go to crazy extremes, extremes no one can make sense of. So, one favorite way to explain it away is to say that crowds do dumb things that individuals, upon cooler reflection, would never do. In a sense, a crowd become its own kind of organism — stupid, clumsy, emotional, etc.

This is basically the thesis of a longtime classic of the genre, The Crowd: A Study of the Popular Mind by Gustave Le Bon (1841-1931). The book came out in 1895. It seems to never be out of print. Financial people love to quote from it, probably because it flatters their worldview. If you have unpopular opinions, Le Bon makes you feel as if you are above the rabble.

I have a copy of the book, and it is still a pretty good read. If you’ve never read it, you probably should get a copy and give it a go. It is mildly stuffy in the way 19th century books are stuffy. It is certainly not politically correct. It is a bit repetitive. Yet there are a number of pearls. Here is a marked passage:

“By the mere fact that he forms part of an organized crowd, a man descends several rungs in the ladder of civilization. Isolated, he may be a cultivated individual; in a crowd, he is a barbarian — that is, a creature acting by instinct. He possesses the spontaneity, the violence, the ferocity, and also the enthusiasm and heroism of primitive beings, whom he further tends to resemble by the facility with which he allows himself to be impressed by words and images — which would be entirely without action on each of the isolated individuals composing the crowd — and to be induced to commit acts contrary to his most obvious interests and his best-known habits. An individual in a crowd is a grain of sand amid other grains of sand, which the wind stirs up at will.”

Not a bad little nugget.

H.L. Mencken wrote about Le Bon’s thesis in Damn! A Book of Calumny. Mencken, as is often the case, is pretty funny about it all:

“[Le Bon’s] theory is probably too flattering to the average numskull. He accounts for the extravagance of crowds on the assumption that the numskull, along with the superior man, is knocked out of his wits by suggestion — that he, too, does things in association he would never think of doing singly. The fact may be accepted, but the reasoning raises a doubt.”

People act goofy in crowds, Mencken says, because their suppressed goofiness can now function safely in a crowd. But not everyone loses their cool. And here Mencken doubts Le Bon’s thesis. There is always an intelligent minority. “They usually keep their heads,” Mencken writes, “and often make efforts to combat the crowd action.”

Now I turn to two who have definitely not lost their heads. They are excellent investors: Seth Klarman at Baupost Group and Paul Singer at Elliott Associates. I had peeks at the quarterly letters both published at the end of April. And both are full of warnings.

“Investing,” Klarman writes, “when it looks easiest, is at its hardest.” He points to the long list of fundamental challenges that make this environment risky — the crisis in the EU, recession in Japan and a slowdown in China. Beyond this, the Fed is juicing the market and keeping interest rates low. The only way anyone can get any yield is in the stock market. Hence, there are all kinds of distortions as investors hunt for yield. You can see the stretching in the valuation of some master limited partnerships, real estate investment trusts and other yield vehicles.

Yet, being patient and picky probably means you’ve trailed the market a bit. Klarman has so far. It doesn’t bother him. He knows that short-term underperformance is sometimes the price you pay for long-term outperformance.

So, you should continue to do the right things. Avoid leverage. Buy only undervalued securities. Hold fewer stocks and bigger concentrations of what you like. All these can lead to underperformance in the short term… but pay off in the end. Klarman’s letter was all about the importance of maintaining discipline and patience in the face of markets like these.

While Klarman wrote a taut 5-page letter, Paul Singer released a 21-page treatise. (He’s trailed the market this year, too.) But the themes were remarkably similar. The markets are too optimistic. And there are many risks and problems out there. Singer took lingering and dark looks at the EU, the Fed’s policies and more. I will spare you the details. Safe to say, Singer doesn’t like what he sees.

Singer was almost apologetic in talking about these things. “We are not whining,” he writes, “just describing an environment beset by thoroughly confused investors, severely distorted by government policy, and driven by money flows chasing hyperbolic news reports and brokerage firms ‘themes-of-the-day.'”

These gents have very long track records of success in markets. Reading over their letters had a salutary effect on me. It was like a sanity check. I also see the market as too optimistic. I see that bargains are hard to find. I see stocks that I didn’t buy because they were too expensive now soar ahead.

But I will continue to be picky in this market and look for low-risk ideas. When I can’t find them, we’ll sit on our hands. I would warn you, too, not to get swept up in the party atmosphere of the stock market.

By the way, the Mencken piece on Le Bon is part of a book called Three Early Works. It includes The Book of Prefaces, with an outstanding essay on Joseph Conrad that is worth the price of admission by itself. It also includes Damn! A Book of Calumny, made of many witty shorter pieces. (Check out “The American Philosopher,” where Mencken eviscerates Williams Jennings Bryan in a paragraph that will leave you laughing). It also has The American Credo, which begins with a lengthy and perceptive essay on American habits of thought at the time.

Building up a retirement savings that can last 20, 30, or 40 years is indeed a challenge. But there’s a group that has redefined retirement planning by sacrificing today so they can have a better tomorrow…