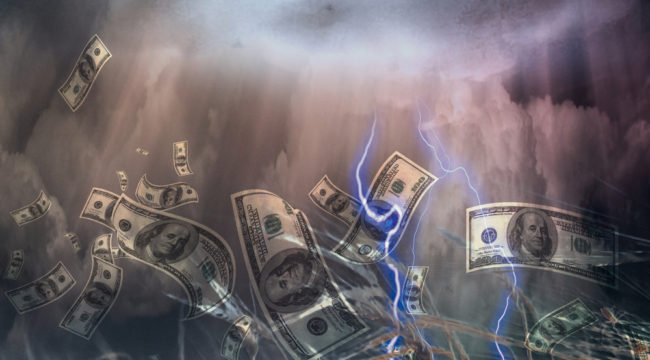 The Crash Will Be Violent

[Ed. Note: To see exactly what this former Reagan insider has to say about Trump and specifically what he believes must be done, David Stockman is sending out a copy of his book Trumped! A Nation on the Brink of Ruin… And How to Bring It Back out to any American willing to listen. To learn how to get your free copy CLICK HERE.]

It is almost impossible to overstate the level of unhinged mania in the stock market, but still the robo-machines and knucklehead day traders just can’t seem to let go.

They are essentially 12-year-olds on a bicycle defiantly screaming, look ma — no hands and a blindfold, too!

Worse still, these daredevils have been indulged by the Fed and other central banks so long that they surely have come to believe flying blind is completely safe. After all, we can count at least 60 “dips” since March 2009 that resolved to the upside over and again.

Altogether the S&P 500 now stands at 3.4X its post-crisis low, having generated an 18% annual return (including dividends) for nearly eight years running.

To be sure, in an honest free market that very fact would be a flashing red light, warning that exceptionally high gains over an extended period necessitate a regression to the mean in the period ahead.

But we have a central bank medicated market, not a free or honest one, so at the end of the day fundamentals don’t count. Instead, on the margin the stock market is driven by momentum, central bank liquidity and trader presumption that it will never be withdrawn.

The reflexive dip buyers have ratcheted the market higher 45% without any plausible or sustainable case for it. Economic growth rates are deflating, productivity has slumped and corporate earnings have been sinking for nearly eight quarters.

Even the central banks themselves concede interest rates are intended to eventually normalize. Their radical experiment in zero interest rates (ZIRP) and bond yield repression of the last nine years was designed to force interest rates temporarily to unnatural lows in order to jump start the economy.

The implied channel of monetary policy transmission, therefore, would have been a temporary spurt of GDP expansion (back to the “potential” GDP path) and earnings growth. That didn’t happen, of course, because quantitative easing (QE) stimulus never got outside the canyons of Wall Street. It did nothing for main street.

In so doing, the Fed has destroyed honest price discovery, and therefore the market has no braking or correction mechanism. It will drift higher on pure buy-the-dips momentum until it hits a sharp object.

Stated differently, this is the most dangerous market mutation to have ever been confected by state policy.

It has destroyed two-way trade, short-sellers and the other mechanisms of free market discipline. What is left is robo-machines that all buy the dips together, but will also sell the coming crash just as quickly.

So never mind the fact that the ostensible reason for the post-election Sucker’s Rally — the mythical Trump Stimulus — has already bitten the dust on Capitol Hill.

According to Speaker Ryan, they are not going to even take up tax reform until they dispose of the GOP’s Obamacare “repeal and replace” pledge, but even Trump now says that may take until next year.

Likewise, any corporate tax reform that does happen will be done on a roughly deficit neutral basis, meaning that the average effective corporate tax rate is not going to change much at all.

That is to say, the effective rate today is about 23% overall and 15% for profitable big cap S&P 500 companies. A deficit neutral reform will leave the average effective rate where it is, even if the statutory rate is reduced to around 20%.

Therefore, there will be no growth coming from corporate tax reform.

And don’t take my word for it. Here is what one of the most outspoken fiscal responsibility champions in the House GOP had to say:

“You’re not going to be able to grow your way out of this one. It’s too big,” says Rep. Tom Cole (R., Okla.). He expresses worry about relying on rosy growth projections, through the use of so-called dynamic scoring, to assume tax cuts would stimulate the economy to materially offset upfront revenue losses. “I worry we’re so in love with dynamic scoring, and it never works out the way the tax gurus tell us it’s going to.”

Moreover, there is not a chance that a significant infrastructure stimulus will pass, either. That’s because a meaningful slice of GOP conservatives in both houses are properly against it and Trump has no chance of forming a coalition with Democrat spenders.

That’s because co-President Steve Bannon does not understand that the White House’s bombastic anti-immigrant campaign is toxic on the Democratic side of the aisle. After all, the Democrats have become the “sanctuary party” of contemporary politics, meaning the two sides will not be joining hands any time soon.

What will be coming soon, however, is the mother of all debt ceiling crises — an eruption of beltway dysfunction that will finally demolish the notion that Trump is good for the economy and the stock market.

The debt ceiling holiday ends on March 15, and it appears that the rudderless Treasury Department — Mnuchin has not yet been approved as Treasury Secretary and there are no Trump deputies, either — may be engaging in a bit of sabotage. That is, the cash balance has run down from a peak of about $450 billion to just $304 billion as of last Friday.

Unless reversed soon, this means that the Treasury will run out of cash by perhaps July 4th rather than Labor Day. After that, all hell will break loose.

Washington has been obviously dysfunctional for years, but the virtue of the Great Disrupter is that his tweets, tangents, inconsistencies and unpredictabilities guarantee that the system will soon shut down entirely.

Consequently, the first half of the year will be consumed in nasty partisan battles over cabinet appointments, the Gorsuch nomination, interminable maneuvers over the travel ban and follow-on measures of extreme vetting and the Obamacare repeal/replace battle.

Then, the second half of 2017 will degenerate into a non-stop battle over raising the debt ceiling and continuing resolutions for fiscal year (FY) 2018 which begins October 1. That will mean, in turn, that there is no budget resolution embodying the Trump/GOP fiscal agenda, and therefore no basis for filibuster-proof “reconciliation instructions” on the tax cut.

This latter point, in fact, needs special emphasis. The frail GOP majorities now in place will be too battered and fractured by the interim battles to coalesce around a ten-year budget resolution that embodies the $10 trillion of incremental deficits already built into the CBO baseline — plus trillions more for defense, veterans, border control, the Mexican Wall, an infrastructure bonanza and big tax cuts, too.

It will never happen. There is not remotely a GOP majority for such a resolution.

But without an FY 2018 budget resolution, inertia and the K-Street lobbies will rule. Without a 51-vote majority rule in the Senate, a material, deficit-neutral cut in the corporate tax rate would be absolutely impossible to pass. Yet that’s exactly what the casino is currently pricing-in.

In short, it is only a matter of time before the robo-machines start re-programming themselves for the fact that the Great Trump Stimulus has gone missing.

When that happens, the stock market will not be a pretty sight.The S&P 500 has now reached the highest ratio to worker earnings in recorded history. It will descend into a bidless free fall when eight years of buying the dip finally unwinds.

The historic mission of the Whirling Dervish in the Oval Office is to bring the “big fat ugly bubble” that has resulted from 30 years of exploding debt and rampant money printing to a thundering halt.

That much the Donald will certainly accomplish.