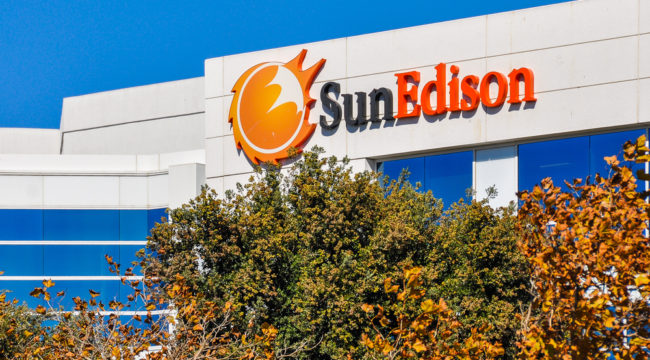 How to “Crash Proof” Your Portfolio

Want to hear a great story? It’s a modern-day fairytale…

It’s about SunEdison, a renewable energy company whose shares skyrocketed in recent years.

SunEdison was the darling of the world’s most successful hedge fund managers, including multibillionaire David Einhorn of Greenlight Capital. They plowed billions into it.

The media joined in with the circus hype too. It “reported” that the company was a “magic money machine” whose revolutionary business plan was throwing off hordes of cash.

SunEdison was clearly going to make people a boatload of money, especially the hedge fund “Masters of the Universe”… because after all, who knows more about making money in the markets than those guys?

Well, it turns out they know a lot about losing money too. You see, SunEdison’s fairytale has an unhappy ending. It filed for bankruptcy a few months back.

Einhorn and many others got crushed, with losses of more than 90%… all because they ignored one of the core tenets of trend following.

Today, I’m going to show you a technique that would have saved them billions…

Know When to Fold ‘Em

Einhorn could have exited SunEdison many times during its brutal decline. But he kept saying things would turnaround. They never did.

Even after SunEdison’s shares plummeted like a stone from $31 in July 2015, to $7 just a couple of months later, Einhorn still hung on, convinced he was correct. And he ended up losing everything on the trade.

Thankfully, the lesson here is a simple one…

You can’t always be right. Nobody ever is. Not even the best and brightest hedge fund managers on the planet.

The key to successful investing is to be prepared for when you’re wrong. You must have a process in place to protect your assets when markets move against you.

I’m talking about a rules-based trend following investment process that gives you precise exit points before you ever enter into a position.

That process allows you to cut losing trades quickly – before they have the opportunity to grow into portfolio-destroying losses.

Hedge fund bigwigs like Einhorn may be able to recover from massive drawdowns. But regular investors can’t. They will ruin you – guaranteed.

Look at how my trend following strategy worked on SunEdison… 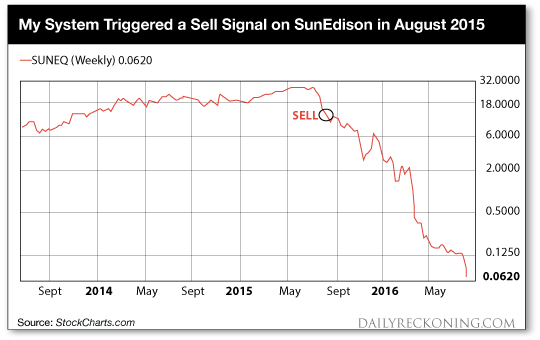 As you can see, my system triggered a sell signal when it was clear that SunEdison’s share price was trending down, well before the disastrous losses hit.

Look, the market is never wrong. Einhorn and other Wall Street elites learned that painful lesson with SunEdison’s epic collapse.

When the market turns against you, and it will from time to time, you must use a predetermined exit strategy that allows you to keep your hard-earned capital. After all, if you have no capital, you can’t play the game.

This disciplined approach to cutting your losses is one of the core commandments of trend following. I talk about it in more detail, along with the other trend following commandments, in my most recent podcast, which I have linked for you below.

Please send me your comments to coveluncensored@agorafinancial.com. Let me know what you think of today’s podcast—the good, the bad and the ugly!