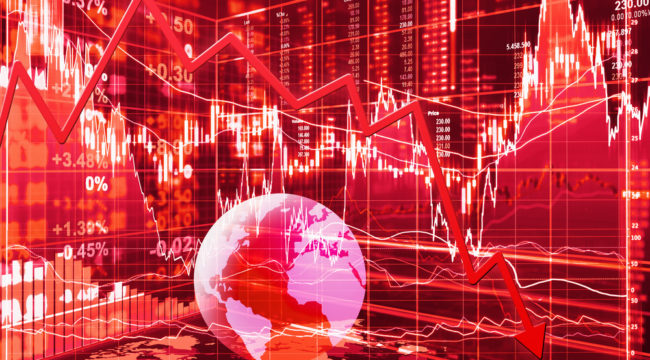 During the run-up to the election, the deep state bureaucrats at the Treasury built up what I described Friday as Hillary’s debt ceiling “war chest,” sending the cash balance to $425 billion shortly before election day.

By contrast, shortly after the election the Treasury stopped selling new debt, and began to actually pay down maturing bills and notes. The Treasury has burned over $338 billion of cash since then. That depleted Hillary’s war chest since she wouldn’t be around to benefit from it.

Or rather, it pumped a veritable tsunami of cash into the canyons of Wall Street.

In a word, the Treasury took its boot off the neck of the bond dealers, thereby enabling the 15% frolic higher in the stock market that has become known as the Trump Reflation Trade.

Last week I told Neil Cavuto of Fox News that the Treasury was burning cash like drunken sailors, but even that turns out to be an understatement. (Besides my interview on Fox News, I’ve also issued an urgent warning about the March 15 crisis. Please see the details right here.)

The Treasury’s operating balance was just $66 billion on Friday. It’s even lower today. Now there are only two days left before the Obama-Boehner debt ceiling holiday expires and the ceiling freezes in at about $20 trillion on March 15.

And it was all that aforementioned “stimulus” which fueled the Trump-O-Mania rally — even as the talking heads peddled the Trump Stimulus meme and the second coming of Ronald Reagan.

Needless to say, those myths begin to die March 15 and the screaming aberration of the past four months — that is, a broke Uncle Sam paying down his debt — goes into reverse.

In a word, the canyons of Wall Street will get hit with a double whammy of cash withdrawal as the Fed finally launches on a long-overdue tightening campaign while the U.S. Treasury gets back into the market doing what it does best — sucking up cash hand-over-fist.

As to the Fed’s impending rate increases, just recall that the delusional posse which inhabits the Eccles Building consists overwhelmingly of Keynesians. They are under the mistaken impression that they have reflated the main street economy back to solid health and the nirvana of full employment, not simply the bubbling indices in the casino.

I beg to differ, of course.

In the meanwhile, the Fed will attempt to march the Federal funds rate higher by announcing two or three additional rate increases this year — with a promise of more to come in 2018. That’s not owing to an eleventh hour conversion to the cause of sound money, of course.

It’s actually a function of the fact that the Fed has dithered on the zero bound for 99 months now and finally realizes that it is “behind the curve.” Again, this is a recognition of its systematic financial repression and falsification of financial asset prices.

Instead, our monetary central planners want to get ready for the next recession by raising rates high enough so that they have room to cut!

That points to the skunk in the woodpile, however. As my colleague Lee Adler regularly points out, the Fed has pumped so much cash into the financial system since the crisis that there is still $2.1 trillion of excess reserves.

This huge liquidity overhang means that the Fed cannot simply “announce” that it wants to peg the money market rate 25 basis points higher at its meetings; it must actually tilt the money market supply and demand balance by draining a considerable amount of cash out of the system.

Indeed, as the money price controllers at the Fed embark on a path of steadily ratcheting up the federal funds rate there will be a substantial and consistent cash drain from the canyons of Wall Street.

And that’s whammy #1 to the stock market.

At the same time, Uncle Sam will commence delivering whammy #2 soon after March 15, as well. That’s because the Treasury has essentially depleted its cash reserves — even as the operating deficit of the Federal government is actually rising again.

This means that the Treasury will be out of cash before Memorial Day at the current rate.

It will be forced to begin its trust fund “disinvestment” maneuvers in order to buy time for an outright increase in the public debt limit. Yet there are three aspects of this impending development that the headline reading algos still buying stock today are utterly unfamiliar with.

First, the U.S. Treasury is now being run by the most ill-informed, naïve fool to have ever occupied the post in modern times, and he has had a lot of competition. I’m referring to the Savings and Loan Guy, Steve Mnuchin, who stumbled upon a $2 billion fortune when the taxpayers bailed out his speculation in Indy Mac, and on that basis kitted himself into the Donald’s inner circle.

Trump will soon rue the fact that he spent 47 days tweeting, cheerleading, disrupting and dinging the powers that be in Washington while his greenhorn treasury Secretary was allowing the bureaucrats in his department to completely deplete the President’s checking account.

That is, the U.S. Treasury should have been maximizing its borrowings prior to the expiration of the debt ceiling holiday on March 15 — even if it meant pushing the public debt over the $20 trillion threshold. That way it would have had a $400-$500 billion cash war chest with which to fight the coming debt ceiling battle on Capitol Hill.

Instead, at the going rate it is now going to run out of cash before even the bloody battle over Obamacare Lite now underway in the House has been completed. That means that there will not be even a glimmer of hope for the Trump tax cut stimulus and economic rebound on the horizon when the GOP backbenchers will be called upon to raise the debt ceiling by trillions.

Do not expect the GOP’s fiscal hawks to be on board.

Secondly, the beginning of trust fund disinvestment operations — perhaps as early as May — will concentrate Washington’s collective mind on the frozen debt ceiling and the prospect that the Treasury will have to ration the incoming receipts once its cash account is empty.

In that environment, the rumor mills will quickly disgorge endless stories about the potential for the Washington Monument and thousands of similar sacred cows to go without funding so that the interest on the debt, social security payments, the military payroll and other “high” priorities can be paid.

This crescendo of fears and threats inside the beltway, in turn, will be amplified non-stop through the chatter machines known as cable news.

And when cable news starts chattering about the impending debt ceiling crisis — even the Wall Street robo-machines will be grabbing those headlines, and the resulting signal will most definitely not be to buy the dips.

Finally, when the Treasury launches into its trust fund disinvestment gimmicks those maneuvers will, in fact, make room underneath the public debt ceiling constraint for the government to temporarily fund itself.

But here’s the newsflash that will come as a shocker to both the Wall Street casino and the Savings and Loan Guy running the Treasury Department. These gimmicks only work because the public debt ceiling includes about $5 trillion of trust fund “investments” that represent nothing more than intergovernmental accounting confetti.

Needless to say, borrowing from the public means draining cash from the government bond dealers who must bid for Uncle Sam’s newly issued securities. And there’s your #2 whammy to the stock market.

Going forward from March 15 there will be two overwhelming realities.

The first is that both the Fed and the Treasury will be draining hundreds of billions from Wall Street on a recurring basis for the first time in 20 years.

The utter delusion that there will be a giant Trump Stimulus will finally be displaced by the reality that what lies ahead is an unending Fiscal Bloodbath.