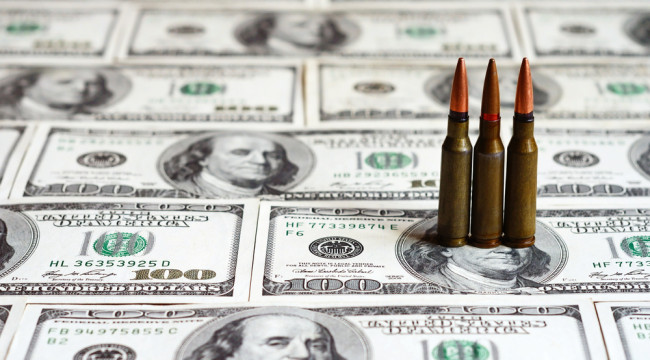 Congress is Writing the President a Blank Check for War

While the Washington snowstorm dominated news coverage this week, Senate Majority Leader Mitch McConnell was operating behind the scenes to rush through the Senate what may be the most massive transfer of power from the Legislative to the Executive branch in our history.

The senior Senator from Kentucky is scheming, along with Sen. Lindsey Graham, to bypass normal Senate procedure to fast-track legislation to grant the president the authority to wage unlimited war for as long as he or his successors may wish.

The legislation makes the unconstitutional Iraq War authorization of 2002 look like a walk in the park. It will allow this president and future presidents to wage war against ISIS without restrictions on time, geographic scope, or the use of ground troops. It is a completely open-ended authorization for the president to use the military as he wishes for as long as he (or she) wishes. Even President Obama has expressed concern over how willing Congress is to hand him unlimited power to wage war.

President Obama has already far surpassed even his predecessor, George W. Bush, in taking the country to war without even the fig leaf of an authorization.

In 2011 the president invaded Libya, overthrew its government, and oversaw the assassination of its leader, without even bothering to ask for Congressional approval. Instead of impeachment, which he deserved for the disastrous Libya invasion, Congress said nothing. House Republicans only managed to bring the subject up when they thought they might gain political points exploiting the killing of US Ambassador Chris Stevens in Benghazi.

It is becoming more clear that Washington plans to expand its war in the Middle East. Last week the media reported that the US military had taken over an air base in eastern Syria, and Defense Secretary Ashton Carter said that the US would send in the 101st Airborne Division to retake Mosul in Iraq and to attack ISIS headquarters in Raqqa, Syria.

Then on Saturday, Vice President Joe Biden said that if the upcoming peace talks in Geneva are not successful, the US is prepared for a massive military intervention in Syria. Such an action would likely place the US military face to face with the Russian military, whose assistance was requested by the Syrian government. In contrast, we must remember that the US military is operating in Syria in violation of international law.

The prospects of such an escalation are not all that far-fetched. At the insistence of Saudi Arabia and with US backing, the representatives of the Syrian opposition at the Geneva peace talks will include members of the Army of Islam, which has fought with al-Qaeda in Syria. Does anyone expect these kinds of people to compromise? Isn’t al-Qaeda supposed to be our enemy?

The purpose of the Legislative branch of our government is to restrict the Executive branch’s power. The Founders understood that an all-powerful king who could wage war at will was the greatest threat to life, liberty, and the pursuit of happiness. That is why they created a people’s branch, the Congress, to prevent the emergence of an all-powerful autocrat to drag the country to endless war. Sadly, Congress is surrendering its power to declare war.

Let’s be clear: If Senate Majority Leader McConnell succeeds in passing this open-ended war authorization, the US Constitution will be all but a dead letter.

P.S. This article was originally posted at the Ron Paul Institute for Peace and Prosperity’s website, right here.