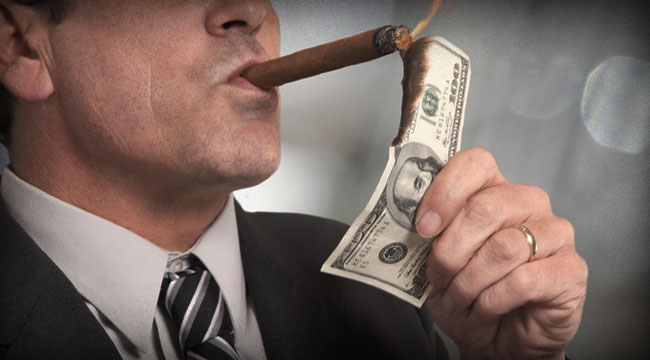 Committed to Ruining the Economy

The Central Planners are at it again, Fellow Reckoner. Greasing the gears…feeding the engines…and speeding headlong and strapped to their seats towards the next crisis.

Leaders of two of the world’s largest criminal organizations gathered in Washington, D.C. this week for the World Bank/IMF Spring Meetings. The Mob fête was attended by all the usual suspects…central bankers…trade secretaries…finance ministers…policy wonks and assorted other rapscallions and reprobates.

“What we need is a full-speed global economy,” she told the audience, “growth that is solid, sustainable, balanced, but also inclusive and very much rooted in green developments.”

“Why stop there?” we wondered. Why not promise strawberry ice-cream for the elderly…and winning lottery tickets for all inner city families of five or more…and high-speed Internet for orphans…and…and…and…

It’s easy to make pledges, Fellow Reckoner, to promise every downtrodden dolt and hard knock story something for nothing. The hard part comes in actually paying for it all. As everyone knows, strawberry-flavored Internet lottery jackpots don’t come cheap!

And yet, the powers-that-won’t-stop-being don’t seem overly concerned in the face of this inconvenient accounting truth. Shocker! Their masterly payment plan is, to quote the Talking Heads, the “same as it ever was.”

As we remarked in these pages a couple of Weekenders ago, the Fed, the BoE and the ECB are providing a massive “jolt” of freshly inked currencies to their respective economies, hoping to prop up optimistic asset prices. The rate of expansion is, says Bill Bonner, “unprecedented in world history.”

We’re talking, of course, about ZIRP, QEI, QEII, Operation Twist (OP) and other such dubious, acronymic concoctions. All the tools’ tools, in other words.

Investors have boosted their borrowing to near-record levels to load up on stocks. The last time that margin debt was this high was just before the bubble burst in 2007. In January, New York Stock Exchange (NYSE) margin debt tipped $366 billion, just shy of the 2007 peak of $380 billion. The Fed’s zero rates and $85 billion per month bond buying program (QE) have sparked the same irrational exuberance that preceded the Crash of ’08. Investors are piling on the leverage because they feel confident that Fed chairman Ben Bernanke will not allow markets to fall too sharply. (This is called the Bernanke Put.)

Skeptical Reckoners might be wondering, therefore, how do these Ph.D. ponies know where they’re going? How do they know their “extraordinary” measures will work? Even by their own admission, they don’t.

Speaking at the same D.C. gabfest, Lorenzo Bini Smaghi, a former member of the European Central Bank’s executive board, admitted, “We don’t fully understand what is happening in advanced economies.”

Yes, Mr. Smaghi, we all know that you don’t know what you’re doing. Rest assured, your ignorance was never in question. It is your — and your colleagues’ — arrogance that is on trial.

Like Smaghi, Sir Mervyn King, the outgoing governor of the Bank of England, must have been caught off-guard when he let it slip that, “there is the risk of appearing to promise too much or allowing too much to be expected of us.”

Again, Sir King (…Jr. III Highness Earl Duke etc.), let us repeat: Far from expecting too much from you, we would happily settle for nothing at all. In fact, we want nothing from you. No cure-all levers. No magic buttons. If only you and your meddlesome ilk could stay your chubby little hands. Alas, the possibility of aggressive inaction seems unlikely to prevail…

Reports CNBC: “The IMF was clear in its global financial stability report that it did not want to see an end to the extraordinarily loose monetary policy being implemented across rich countries.”

José Viñals, the IMFs head of financial stability, even went so far as to claim that central banks’ efforts were “absolutely necessary.”