A couple of weeks ago, I was in Toronto meeting with gold industry experts. One night, I spoke with a man who has been in the gold business for over 45 years.

Here’s what he said to me: “I’ve seen estimates out of China that over 375 million Chinese want to buy gold. But they can’t. They live in the remote interior of the country, not the more open, coastal cities. These Chinese have little or no access to gold markets. And even if they did have access, there’s not enough gold.”

The man explained that any Chinese with means and access is buying gold. He told me that just the Shanghai Gold Exchange has over 10 million customers. 10 million separate, account-holding customers. Just for gold.

While we were talking, I did some quick math in my head. Suppose the average customer, a middle class Chinese worker, has about $2,500 socked into gold. At $1,250 per ounce, that’s the equivalent of about two ounces of gold.

That’s 10 million clients, each with an average of two ounces, for 20 million ounces of gold. That’s the equivalent of adding up the annual production, in 2015, of the four largest gold mining companies on the stock market — Barrick Gold, plus Newmont Mining, plus AngloGold Ashanti, plus Goldcorp. 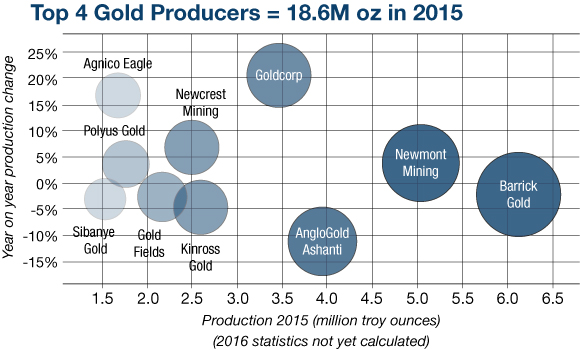 There’s immense, pent-up demand for gold in China, and it’s already a massive pull on the world’s gold resources.

Chinese gold demand — both at the state level, and the teeming millions of individuals — is part of a story that’s not well-understood here in the West.

Gold Between the Lines

In the West, we’ve grown up in a world where the U.S. and the dollar reign supreme. Every currency moves up and down, here and there, from time to time. But it’s difficult for us to imagine anything much different than a world in which the U.S. dollar sets the pace. It’s hard for us to imagine a massive political upset that changes our way of life too much.

But if we look briefly at Chinese history, we’ll see that they haven’t had a chance to grow complacent with the status quo. We don’t have to go back to ancient times to see political upsets, famine, and fear.

When you look at the other factors Jim Rickards has highlighted, like China’s increasing debt, the problems with demographics, ghost cities… the Chinese people have picked up enough signals to start preparing for the next crisis.

That’s why many Chinese are trying to preserve whatever wealth they’ve accumulated. The safest way to preserve wealth will always be gold. But as my gold expert told me in Toronto, there simply isn’t enough gold being produced to meet this demand.

Right now, almost all of China’s retail, investor-driven demand for gold is met by the Shanghai Gold Exchange. Established in 2002, the Shanghai Gold Exchange is wholly owned by the Chinese government. In recent years, the organization has become the largest facility in the world for bullion sales and trading, with money and metal passing through a network of 55 vaults.

One recent estimate is that, in 2016, Shanghai Gold Exchange moved over 2,000 tonnes (or 64,000,000 ounces) of gold into Chinese investors’ hands. It’s a mix of new production gold, and imports of gold from western inventories. All this demand and sale, even though recent gold price premiums on the Shanghai Gold Exchange have been as high as 25% above the global-posted spot price. This reflects the physical scarcity within Chinese gold trading channels.

Presently, Shanghai Gold Exchange has over 10 million customers, and it’s just a beginning. As China continues to try to combat its economic, political and social issues, we must confront the idea that Shanghai Gold Exchange could become the source for explosive growth in customer numbers, and gold demand, in the years to come.

The next logical question to ask is, where’s the gold? Are there 20 or more Barrick-equivalent gold mining companies out there? It’s a simple answer: No way.

Right now, the global gold industry is scarcely keeping production at steady levels. Since 2012, many marginal gold mines closed. Many mining companies shed assets and laid off skilled workers. (We discussed some of the production problems facing gold and gold miners in our September.)

Across the world, there’s been a dearth of gold exploration, and very few significant discoveries. We don’t expect to see any significant growth in gold output over the next three to five years, based simply on the lack of new mines under construction, and the absence of expansion work at existing facilities.

A collapse in China won’t be contained within China. A shortage of gold to meet demand will soon in China affect U.S. investors. So you must begin now to prepare now, and position yourself to profit from increasing demand for gold.