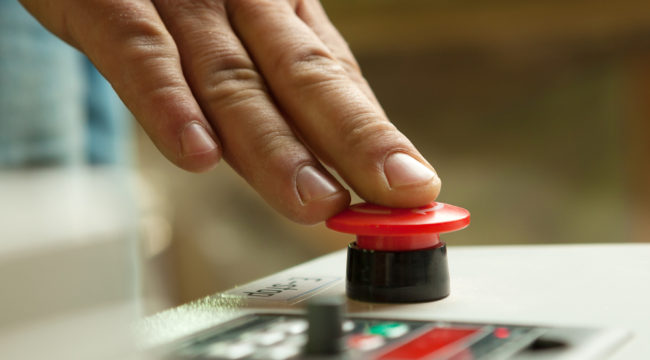 It happened at the same Federal Reserve conference Yellen spoke at in Jackson Hole, Wyoming. But it received almost zero attention.

And the monetary criminals pulling levers at global central banks want to keep it that way.

You see, the conference was titled “Designing Resilient Monetary Policy Frameworks for the Future”…

The World Is Flatlining

Look, there’s no other way to cut it: Central banks are screwed. They’re out of bullets. They know it. And they also know the rest of the world will catch on soon enough…

They’ve also purchased $25 trillion of financial assets. That’s larger than the gross national product of the U.S. and Japan, the first and third largest economies in the world, respectively.

And through their sadistic negative interest-rate schemes, there’s now $8 trillion of negative-yielding sovereign debt. That’s 54% of all sovereign debt. And $13 trillion in negative yielding global bonds. That’s 28% of all bonds.

The markets have been flooded with historic torrents of liquidity to supposedly spur economic growth. But none of these experiments have prevented the world’s developed economies from flatlining…

Look at the numbers: U.S. GDP in June was just revised down to an anemic 1.1%. That’s down from 1.6% the previous quarter.

The eurozone economy expanded just 0.3% last quarter, down from 0.6% the previous quarter.

And Japan showed no growth in June, down from 0.5% the previous quarter.

The developed economies are failing.

And even China’s world-beating economy is now sucking fumes.

Chinese economic growth fell below 7% in 2015. That’s the first time below that mark since the Great Recession in 2009.

So what can central bankers do to “stimulate” the global economy into more bubbles now that it’s tapped out?

The answer is nothing. And that has elites in a state of panicky fear…

Don’t get me wrong, Yellen and her accomplices will still try work new “schemes” in…

Now that NIRP is destroying European banks and creating mass cash hoarders in Japan, central bankers will go for “helicopter money” next.

But if printing Monopoly money for the proletariat was the solution to troubled economies, insiders would have tried it years ago.

Central bankers know this. They’re simply trying to extend the credit bubble as long as they can so it doesn’t burst on their watch. They are politicians after all. They only care about naked power.

And now that they know their “stimulative” monetary measures could deliver the mother of all Black Swans at any moment, they’re asking governments around the world for massive fiscal help to continue their redistributionist policies.

Good luck with that. Where is this stimulus money going to come from? Government debt issuance?

Will they propose massive entitlements cuts that would get every congressman thrown out of office? Not. Gonna. Happen.

So what then? There is no answer.

Monetary policymakers have no solutions to spur growth. That’s out in the open now. That’s why they are now “off script” and begging for a fiscal rescue.

And global governments have no fix either. The structural changes that might spur growth, like lowering personal and corporate taxes and reducing inane regulations, are not any leader’s agenda.

The masses have been so convinced that someone will always be there to save them that entrepreneurial thinking, the real source of growth, is near extinction for most.

So, ladies and gentlemen, we are in the real life Matrix—billions of people hooked to feeding tubes waiting for someone to turn the lights out at night.

And all this is happening while the major economies that drive global growth get weaker each day.

Please send me your comments to coveluncensored@agorafinancial.com. I want to know what you’re thinking.