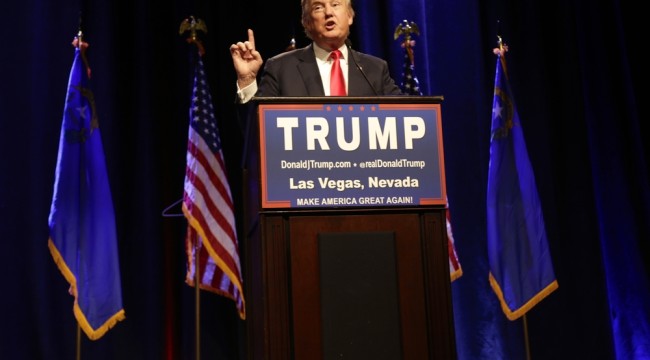 Can Trump Really Win the Election?

Bernie Sanders is a self-declared socialist, a Marxist who wants you on a government commune living as a peasant.

Have you ever wondered why he’s become so popular in America, a capitalist country?

What’s worst of all is his single-payer health care proposal, which would increase the size of the federal government by 50% by some estimates.

Analysts have estimated the sum total cost of all Bernie’s “free” stuff is $30 trillion.

But as you know, nothing in life is free. Somebody has to pay for it. And that’s going to be you and me… the producers.

Our country is in dire straits. Somebody needs to hit the reset button to take us back to our founding principles of limited government, personal responsibility and liberty.

As Jim Quinn describes below, the 2016 election may come down to a battle between what he calls “the free s*** army” versus Americans who work hard and produce.

Who will win the election? And how will that impact you as an investor?

As a trend follower, these political and economical debates have no impact on my strategy.

But as a patriotic American, I want to see us get back to the principles that made us strong and prosperous, because our country is clearly on the wrong path.

Below, Jim Quinn reminds us in his typically colorful language that America isn’t what it used to be… and the jobs market might not be as strong as the Fed wants you to believe.

Can the situation change? Maybe. But even if it doesn’t, as a trend follower you’ll be ready for whatever happens.

What Are These People Doing?

The two charts below may explain why, despite the propaganda about low unemployment, tremendous job growth and the retirement of Boomers explaining the lower participation rate, the economy is in recession, the middle class is pissed off, and the smell of revolution is in the air.

Sure, some women are staying home to raise their kids, but how many two-parent families can afford to get by on one income these days? 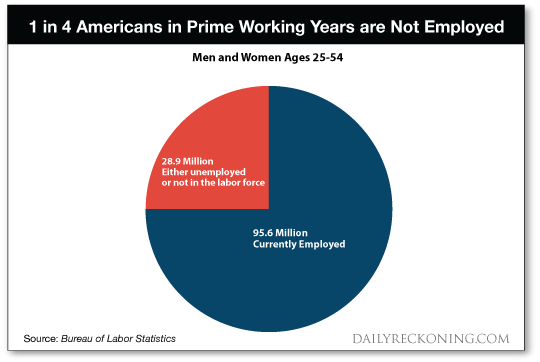 Just based on the historical record of employment to population ratios, the country is short by 3 million to 5 million jobs in this key demographic category. This has nothing to do with Boomers or retirement.

Any man between the ages of 25 and 54 who is not truly disabled should be working. If they’re not, they’re either a good-for-nothing, lazy free s***ter, or the complete destruction of our blue-collar industries by politicians, bankers, and corporate CEOs has left men with no remaining options. 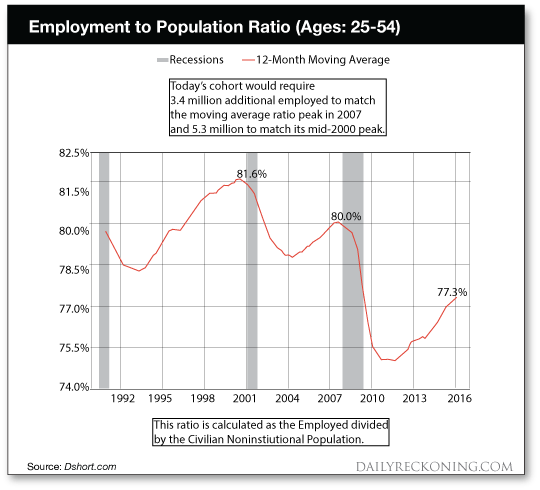 What are the 12% of males in their prime working years doing, if they’re not working? Even the female participation rate for 25-to 54-year-olds is the lowest in almost a quarter century.

I believe this data is at the gist of Trump’s growing popularity. You have a portion of the 25 to 54 population not working because they choose to not work.

They are essentially members of the free s*** army and expect the producers to pay their way. They will vote Clinton or Sanders.

Then there are middle class 25-to 54-year-olds who have been laid-off because their companies shipped the jobs overseas or the overwhelming tax and regulatory burdens imposed by Obama and his minions have put companies out of business resulting in more layoffs.

Men and women in the prime of their life not working get very angry and frustrated. That anger is bubbling over and the MSM and establishment politicians are shocked because their luxurious, secluded lives are unaffected. They will be flabbergasted when Trump wins the presidency on this wave of anger and frustration.