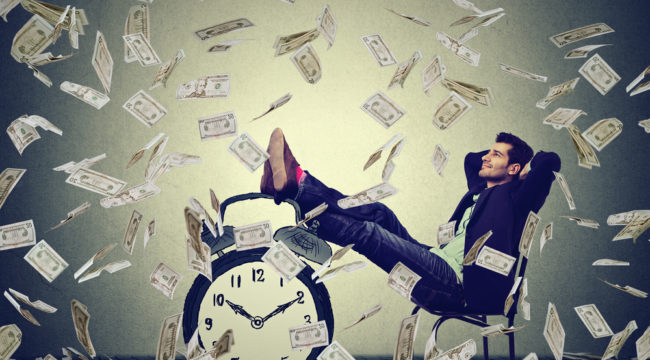 You Can Make a Fortune Spotting Trends

I visited Google not long ago with some friends and, after almost getting arrested, my mind was blown…

First, we wandered into the garage where they were actually making or fixing the driverless cars.

When they finally realized we were wandering around, security had to escort us out. We got scared and we thought we were going to get in trouble or thrown out.

But then we met with a friend high up at Google and learned some of the things Google was working on instead….

Nothing was related to search engines, which is what you normally think of when you think of Google, right?

Everything was related to:

Billion person problems? That means a problem wasn’t considered worthy unless it could solve a problem for a billion people.

When you solve problems that big it doesn’t create a ripple effect. It creates a surging crashing mile high wave that reshapes the world.

And the opportunities that I watch for are in that chaos. It’s dangerous and unpredictable and exciting.

But at some point there is flash of clarity. That’s when you know that the future isn’t abstract and “tomorrow” bleeds into today.

In Google’s totally off-limits-to-the-public testing garage I tripped and fell with absolute certainty into what will be one of the most disruptive and lucrative trends of the next decade.

You’ve seen bits of this story here and there, or maybe you already follow things like this closely.

Right now there is a cold war era style arms race between Google, Tesla, Apple and Uber. Oh and now others are putting huge amounts of energy into this space as well. Last year GM announced a $500 Million investment into a strategic partnership with Uber competitor Lyft.

You can’t throw around half a billion without people noticing…

When you notice a trend, you immediately have a handful of choices because :

I will tell you that the way I make money is through the first and last items listed. I think of ideas for other companies who call me, and my “business” is to them help them implement those ideas on their own and become massive successes.

If you combine the ideas that trends give birth to with an understanding of demographic trends, there are trillions of dollars waiting to made.

But the easiest (and fastest) way I make money is simply by investing in mega-trends.

Having said that, sometimes the most money can be made not by investing in the obvious stocks, but what I now call “remora” stocks.

I was having breakfast with one of the biggest hedge fund managers. He was telling me his latest ideas. Then he stopped chewing and said, “you know what. You’re a remora.”

I didn’t know what that was. The food was practically spitting in my face. “A remora is a fish that is a blood-sucking leech.”

But he added, “But I mean it in a good way. Some guys just follow me into stocks, don’t give me credit, and get out as soon as possible.”

I was quiet then. Because, to be frank, it’s exactly what I plan to do.

I get calls from startups every day asking me to invest money in their company.

Most of the time I don’t invest. I have a huge checklist about who I invest in. And it’s eerie: when I don’t check one of the boxes, I lose money. When I follow the checklist, I make money.

Like the time I invested in Optimal, which was acquired by Brand Networks a year later (after they also asked me to be on their board of directors).

But the average investor isn’t able to be an angel investor, or privately invest in a company before it goes public.

When I am investing, I like to look at what I am going to call remora companies.

These are companies that leech onto larger, household names — like Apple, Google, and GE. And, on top of it: I’m going to follow the super-hedge fund managers that are also quietly going into these smaller remora-like companies.

These are investments most people have never heard of. Another term I like to use for this strategy is “backdoor” investing.

As the large companies (like Apple) become more popular and investors flood to invest in them, forcing the stock price up, the smaller remora companies get to enjoy the ride up as well.  But until now, it’s only the big funds that have benefited.

You see, when large companies produce their products, they don’t create all of the parts that go into them. They outsource many of the pieces to other, often smaller companies.

Apple, for example, doesn’t produce the glass it uses in its iPhones; it outsources that part to another company. But that company’s earnings might go up 10x faster than Apple’s because they are where the real margins are at.

Tesla cars and invest in that?

That tiny company won’t be tiny for long. So… it’s the back door.

Investors are often slow to react to these “backdoor,” or “remora” companies, giving us an advantage for investing.

Let’s take a look at a couple of past examples:

Semiconductor providers. Skyworks Solutions (SWKS) is a company that builds semiconductors for Apple, Samsung, and other major phone makers.

Every time somebody purchases an iPhone (over 34,000 are sold an hour), SWKS profits.

Ambarella (AMBA) is another stock that builds semiconductors. They supply them to companies like GoPro and Amazon (for their drones).

Network Security. In late 2013 and early 2014, Target and Home Depot were hacked and hundreds of thousands of their customers’ credit card information was stolen. More of these incidents are happening all the time.

These hacks force every single public company to up their network security in order to keep good faith with their customers. These companies don’t build this security in-house though — they outsource it to professional network security providers.

This is where we find our next remora companies.

You’ll often hear financial analysts telling you not to invest where everyone else is. Even Warren Buffett said, “You can’t buy what is popular and do well.”

But, you can do well if you look closer.

Find what is popular and look towards the fringes. Look for these remora companies that will profit from the popularity of their larger buyers and you can be successful.