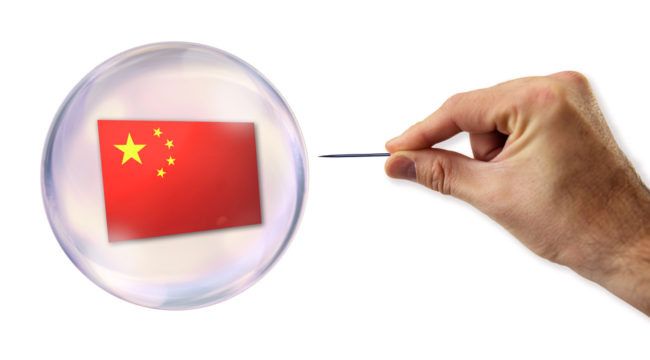 This Bubble Could Burst Any Day

“All hell” is about to break loose in China.

Such is the professional judgment of Kyle Bass, boss of Hayman Capital.

The devil of this hell is a banker. And it’s credit that spreads the fires…

Chinese credit expanded “too recklessly and too quickly,” argues Bass.

And it’s beginning to unravel…

In a generation China has gone from economic blank to the world’s second-largest economy.

Its growth spurt has no equal in history.

Cheap credit — cheap debt, that is — made it possible.

And UBS says it could exceed 300% within two years… a level that could tempt fate on even its busiest day.

The wealth management product, or WMP, is a grand Ponzi scheme parading under a sugary title.

As Jim Rickards explains, “When customers go into a bank, they are offered a standard bank deposit paying about 2% or a “wealth management product” that pays about 8%.”

Which would you take?

Chinese have dumped about $9 trillion into WMPs and similar products.

And they may never get it out…

According to Jim, the banks use their customers’ money to invest in risky development projects and state-owned enterprises (SOEs) facing bankruptcy.

In other words, they’re investing in dogs. Dogs that will probably bite. Hard.

Many Chinese depositors think their money’s guaranteed by the government. But they should read the fine print…

These WMPs aren’t guaranteed at all. Jim:

Many customers naturally take the 8% return and invest in bank-managed WMPs. Customers believe the WMPs are guaranteed by the bank or the government. They’re not — WMPs are just unsecured investments.

And if these risky enterprises go toes up… what happens when all those depositors want their money back?

If you’re beginning to get a whiff of the subprime housing crisis here in America, keep following your nose…

Jim says WMPs are like the collateralized debt obligations (CDOs) that caused the Lehman collapse.

“Think about this,” returning the floor to Bass for the moment…

At the peak of the subprime mania the mismatch between assets and liabilities was about 2%.

In contrast, Bass says “[China’s mismatch is] more than 10% of their system.”

Perhaps that’s why the former head of the Bank of China calls these WMPs the greatest Ponzi scheme in history.

At the current rate of expansion, it is only a matter of time before some banks find themselves unable to fund all their assets safely.

“And at that point,” warns Anderson, “a financial crisis is likely.”

“Every major country with a rapid increase in debt has experienced either a financial crisis or a prolonged slowdown in GDP growth,” adds Ha Jiming, Goldman Sachs chief investment strategist.

Why should China be any different?

No one knows when the band stops playing, of course.

Its slowest annual growth rate since 1990.

Meanwhile, the debt keeps piling up… higher and higher…

And the “greatest Ponzi scheme in history” schemes away.

Bernie Madoff must be green with envy…