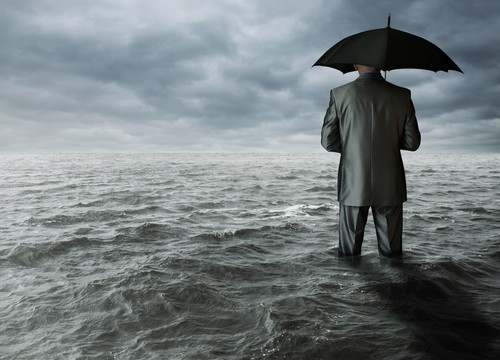 When markets reopened in New York this week after Hurricane Sandy had ravaged the region, one Dow-listed darling scooted ahead of the crowd. Home Depot, which has already clocked a 45% gain YTD, jumped ahead another 2.5% before lunchtime. The logic here is simple enough. Investors were betting that the home improvement retailer would be one likely beneficiary from Hurricane Sandy. Homeowners need to repair their homes after the storm. Home depot has all their needs. What’s not to like?

Nothing, really. Taken in isolation, the havoc wrought by Hurricane Sandy probably is a boon for the retailer. At least in the short term. Roofs need repairing. Windows need fixing. Basements need bailing out. Hurricanes, along with earthquakes, natural disasters and the strange advent of DIY home improvement television programming, are good for Home Depot.

But that’s only part of the story. Sadly, it’s the part people lacking the ability to look past their own noses tend to focus on. Dr. Peter Morici, a professor at the Smith School of Business at the University of Maryland and former chief economist at the U.S. International Trade Commission, is one such person. For Morici, gauging the damage of Sandy is more than “merely adding up insurance payouts and uninsured losses.”

Mired in myopia, the well-degreed professor wrote in a CNBC blog post that went to press just hours before Sandy made landfall on Monday: “Disasters can give the ailing construction sector a boost, and unleash smart reinvestment that actually improves stricken areas and the lives of those that survive intact.”

Where the “smart reinvestment” comes from, the professor doesn’t say. Lacking Morici’s academic qualifications, we’ll resort to taking a wild, pie-in-the-sky guess: it will come from…somewhere else.

In other words, the resources to which Morici refers will not be conjured out of thin air. The work will come as an opportunity cost to the community. Every brick laid, every roof mended, every man hour employed to repair the destruction left in Sandy’s wake will be a brick…a roof…a man hour not put to use somewhere else.

The lesson, as Bastiat, Hazlitt and countless others have sought to illuminate, is to take into account that which is unseen. That something is a benefit to one part of the economy says nothing about its effect on other sectors. More importantly still, is tells us nothing about its net effect.

Energy and resources do not magically appear, as the professor would have us believe, but merely change their form. Applied to chemistry, this law (sometimes known as the principle of mass/matter conservation) helped unshackle 19th century chemists from their crude fixation with alchemy. More than 100 years on, modern mainstream economists of Morici’s strange bent have yet to learn their lesson.

Not content to merely miss the point, the professor went out of his way to avoid it altogether when he continued, further in his post…

“…rebuilding after Sandy, especially in an economy with high unemployment and underused resources in the construction industry, will unleash at least $15-20 billion in new direct private spending — likely more as many folks rebuild larger than before, and the capital stock that emerges will prove more economically useful and productive.”

Following Morici’s tortured logic, one gets the feeling that he thinks hurricanes might actually be a net positive for the economy.

Not so fast. According to an estimate he cites, losses from Sandy would be “about $35 to 45 billion.” So far, Morici has only shuffled $15-20 billion from one place to another. Still a net loss. Ah, but a good Keynesian never lets a natural disaster go to waste. Here he continues, summoning that most magical of tools, the “multiplier effect.”

“Factoring in the multiplier effect of $15-20 billion spent rebuilding yields an economic benefit from reconstruction of about $27-36 billion. Add to that the gains from more a [sic] more modern and productive capital stock — likely in the range of $10 billion — and consumer and business spending that is only delayed but not permanently lost-likely in the range of $12 billion — and the total effects of natural disasters of the scale of Sandy are not as devastating two years down the road.”

This kind of illogical legerdemain is nothing new. Nor, it seems, will it be overcome anytime soon. An article published by Bloomberg Businessweek features the bloviating quackery of yet another destruction enthusiast.

“We definitely see stronger job gains in response to natural disasters, particularly when economies are coming out of recession,” Gus Faucher, senior economist at PNC Financial, “who has researched the economic effects of natural disasters,” was quoted as saying.

Of course, no discussion of the Broken Window Fallacy would be complete without at least a nod to Mr. Paul Krugman, vacant-eyed flag waver for the Alien Invasion Stimulus Plan. This is a man who has repeatedly referred to WWII as a “public works program.”

Then, in the aftermath of 9/11, safe and sound in his Ivory Tower of Idiocy, Krugman announced:

“Ghastly as it may seem to say this, the terror attack — like the original day of infamy, which brought an end to the Great Depression — could do some economic good.”

Leave it to the New York Times, no less, to brandish this reproachable filth on their editorial pages. Shame!

Meanwhile, back on planet earth, hurricanes, wars and other disasters, both “natural” and “unnatural,” are devastating events that reduce — rather than raise — our standard of living. They wreck lives and property, level communities to rubble and ravage entire regions. Our thoughts today are with those who, instead of building on what they once had, must now exhaust scarce resources just getting back to where they once were.

It’s hard enough suffering a tragedy without some condescending twit telling you how, if only you employed their hackneyed thinking, it really is a good thing after all.